This post is sort of a follow-on piece to SteveÃ¢â‚¬â„¢s excellent discussion of player value: https://redlegnation.com/2015/04/20/the-value-of-players/. You donÃ¢â‚¬â„¢t have to have read his post to understand mine, but itÃ¢â‚¬â„¢s worth your time, especially if youÃ¢â‚¬â„¢re not familiar with the concept of Wins Above Replacement (WAR).

ItÃ¢â‚¬â„¢s not revolutionary to suggest that the current system of player compensation in baseball is kind of messed up. ItÃ¢â‚¬â„¢s a complicated system, where a playerÃ¢â‚¬â„¢s ability to negotiate their salary varies based on where they were born and how long theyÃ¢â‚¬â„¢ve played. The Reds are learning firsthand how difficult this system can be to navigate, with Homer Bailey and Devin Mesoraco on the DL right after signing large contract extensions. In this post IÃ¢â‚¬â„¢m going to examine the system in place, and see if there isnÃ¢â‚¬â„¢t a better way forward for teams.

A quick summary: For players that are drafted or signed in the international signing period, the player is generally paid some sort of signing bonus, and they receive between $1150 and $2700 per month in the minor leagues while they are not on the 40-man roster. Once the player makes the 40-man roster, they make about $40k for the first year and $80k the second. Aside from the signing bonus, which can be anywhere from 4 figures and 8 figures, the money a player earns in the minors is basically nothing to a major league franchise.

Once a player makes the major leagues, during their first three years they have to take what their team will pay them or not play. This isnÃ¢â‚¬â„¢t as bad as it sounds because MLBÃ¢â‚¬â„¢s minimum salary is 507k, but again, for a modern major league team this amount is essentially zero. After his first three years, a player gets to negotiate a salary with his team but cannot choose a different team if he isnÃ¢â‚¬â„¢t happy with their offer. If the player and team canÃ¢â‚¬â„¢t agree to terms, an arbiter picks either the salary proposed by the player or the team. This is when players start to cost their teams big money. Finally, after 6 years of service time, a player can fully negotiate his salary, leveraging one teamÃ¢â‚¬â„¢s offer against another, by becoming a free agent. Because of this ability, free agents are generally the best paid, most expensive players.

Now, an important point for this discussion is that a team can offer a player a long-term major league deal at any time in this process.

Because of the high cost of free agents, teamÃ¢â‚¬â„¢s often pay most of their salary to only 5 of their 25 players. Now, this is not necessarily a bad thing, because premium talent wins ballgames. But, the five teams with the highest percentage of their salary dedicated to only 5 players serve as a cautionary tale, as none of them had winning records last year. The current Philllies are one of the most expensive and because of their many high-priced free agent deals and contract extensions. TheyÃ¢â‚¬â„¢re once of the worst teams because of something else: aging.

To look at how aging affects productivity, I added up the WAR for every regular major league position player over the last 20 years, and divided that up by age. (i.e., I found the total WAR of every 25 year old in 1995, plus the total WAR of every 25 year old in 1996, etc, etc, up to 2014, and did that for ages 18-41). Then I divided this by the total WAR accumulated over that time period, to see what percentage of total production players of each age contributed. Put another way, I answer the question, how much of the overall production in baseball, over the last 20 years, was contributed by players of X age? The results are presented in the graph below. 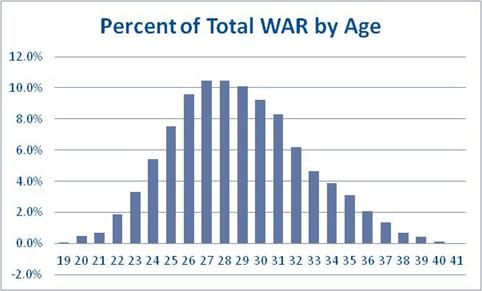 The nifty thing is, while what this shows is the average of all the players in the league over a set of years, it also serves as an estimated aging curve for an individual player. Instead of saying, Ã¢â‚¬Å“over the last 20 years, 29 year old players have contributed about 10% of overall production,Ã¢â‚¬Â we can say Ã¢â‚¬Å“on average, a player will produce about 10% of their total career value at age 29.Ã¢â‚¬Â By looking at the data this way, we can start to get a sense of when players are their best, which is when you want your team to be paying them. (Or at least, when I want the Reds to pay them, the rest of the teams can do whatever.) The graph shows us that players produce about 80% of their total value between the ages of 23 and 32.

Which brings us back to the system of compensation. The system is kind of rigged for free agents deal (and extensions given to players near free agency) to blow up in a teamÃ¢â‚¬â„¢s face. Most good young players come up between ages 22 and 24, which means that they become free agents at between 28 and 30, when they are at their best. ThatÃ¢â‚¬â„¢s a when a team is going to give them the most money, and often a lot of years as the teams outbid each other for premium talent. But then, players only produce about 30% of their total career value after age 30, and those teams end up getting not a lot of bang for their buck.

And it gets worse. The years that I looked at included the Steroid Era*, which featured some suspiciously long and productive careers. The graph below shows the percent of total league WAR produced by players over 30 over the last 20 years. You can see that during the late 90s and early 2000s, players over 30 produced significantly more of the total league WAR than those players do these days (a high of 39% of total value in 1999 compared to a low of 20% in 2013). So really, when considering what years of a playerÃ¢â‚¬â„¢s career youÃ¢â‚¬â„¢d want to pay for, the chart above is actually a little optimistic for players over 30. 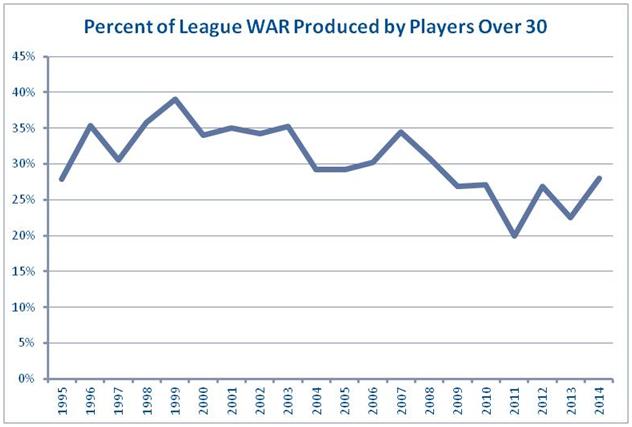 So, given the constraints of the current system, how can a team pay for premium players at their peak, without ending up paying huge sums of money to players that arenÃ¢â‚¬â„¢t productive? I think the keys are good scouting and analysis, and targeting the years that you want to pay for.

First, you have to trust the scouts and analysts that you have working for you. If you do, then by the time a player has made it through your minor league system, you should have a pretty good idea of what his floor and ceiling will be in the major leagues. Then when that player gets the call, or maybe as late as after his first year (at the latest) you offer him a contract that you think accurately values the years you want to pay for, including the risk that he wonÃ¢â‚¬â„¢t reach his ceiling or will be injured.

Now, I know that sounds like a lot of moving parts, but it boils down to something not that complicated, and some teams are already doing it. For example the Marlins extended outfielder Christian Yelich after his first year for what could be 8 years $65M with the option year that was included. That means they will be getting his age 23 through 30 seasons at roughly $8M per year. As SteveÃ¢â‚¬â„¢s piece discussed last week, one WAR is valued at between $6M and $7M, and that price is expected to rise. So in the end, Yelich just doesnÃ¢â‚¬â„¢t have to be that good for that to be a reasonable contract. Given that he put up 1.7 wins as a rookie, the contract could turn out to be a major value for the Marlins. You can see other examples of these types of contracts with players that have signed from Cuba in recent years.

So the keys are to pick the years you want to pay for and pick and amount that seems reasonable. If the player turns it down, what have you lost? You just go back to the normal system and try to do the best you can in that broken framework. But, for example, after Billy HamiltonÃ¢â‚¬â„¢s rookie year last year (age 23, 2.5 WAR), what if the Reds had offered him 9 years $70M? (Maybe with some options years or whatever). That would be a lot of money for a 23 year old kid to turn down after his rookie year. It would guarantee him the financial payday that every minor leaguer dreams about. But, at about $7.5M per year, it would also be incredibly low risk for a player like him in his prime. Even if Billy Hamilton totally disappoints and never reaches his potential, heÃ¢â‚¬â„¢s still very likely to contribute one WAR per year through his most productive seasons.

So my conclusion is: there is room in baseballÃ¢â‚¬â„¢s broken system for a shrewd team to get extra value out of their payroll, while at the same time paying players well for their best years. The system now keeps playersÃ¢â‚¬â„¢ salaries artificially low during their best years. This frees up a lot of payroll space, which teams then use to bid against each other for free agents that will almost certainly decline to the point of near zero production, while getting paid astronomically. Burdening a club with aging players at high costs eventually takes away roster flexibility for all but the richest teams. Instead, teams should target the players they like and the years they want to pay for as early as possible (basically treating their minor league players like they were from Cuba), and offer contract extensions that fairly pay the players for their best years, while virtually guaranteeing the club a good value for the life of the deal.

The side effects of teams moving in this direction could be many and enormous, and I hope our great commenters here will explore them. Some that pop up to me are: a return to players staying with one team for longer, more trades of major league talent for major league talent rather than salary dumps for minor leaguers, and reduced salaries for older free agents because teams will have more of their payroll spread out among their young productive players.