Bruce homered in the second inning to give the Reds a 2-0 lead. The Reds scored two more in the second, including one on a bases loaded walk by Zack Cozart. The Reds added three more runs in the third inning, taking a 7-1 lead, courtesy of two wild pitches. The Brewers made things interesting, scoring four runs in the 9th. However, Chapman shut the door by striking out Ryan Bruan, who represented the tying run. 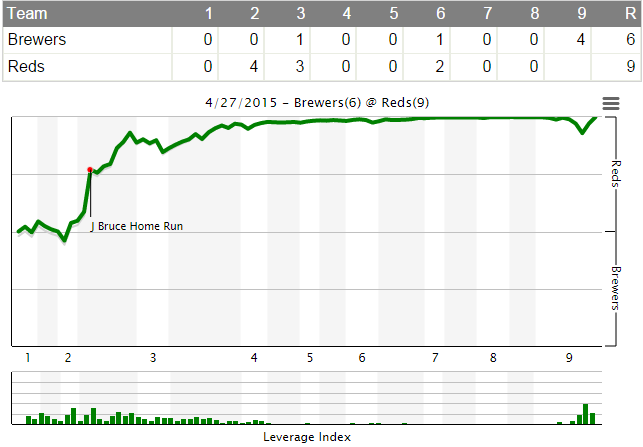 According to Fangraphs WPA statistic (winning percentage added), the most important play of the game was Jay Bruce’s two run home run in the second inning, giving the Reds a 2-0 lead. The home run by Bruce increased the Reds chances of winning by 18.4% (from 58.6% to 77.7%)

It sure was good to see Jay Bruce have a great night at the plate. Bruce hit a big two-run home run in the second inning to get the Reds offense rolling. Even more exciting to me was that Bruce walked three times! It was good night for ole’ Bruce.

The Reds offense walked NINE times. Yes NINE times. It set a new season high for team walks (previous high was 8 on April 12th vs St. Louis). It was good to see the Reds have some patient, quality plate appearances tonight. Maybe even more impressive is that the Reds offense walked nine times and ZERO of them came from Joey Votto. In the game vs St. Louis earlier in the year where the Reds walked eight times, Votto had three of those.

Zack Cozart walked with the bases loaded to bring in a run! That is pretty cool considering Cozart had the worst OBP (.268) in the NL last season.

Brandon Phillips finally got his first extra base hit of the season!

Phillips streak without an extra-base hit ends at 86 PA, the longest of his career by 14 PA. 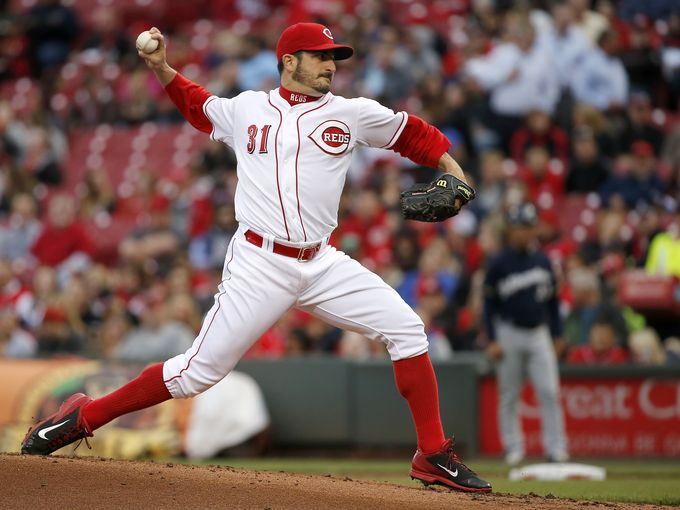 Jason Marquis allowed just two runs in eight innings tonight. There was nothing tonight that indicated Marquis can actually be a decent MLB pitcher in 2015, but it was good to see him give the Redlegs quality innings. Marquis has got some generous run support this season too.

#Reds have scored 28 runs in Jason Marquis's 4 starts. They've scored 47 runs in the other 15 games.

Homer Bailey was placed on the DL prior to the game with a sprained elbow. It was the same elbow Bailey had surgery on last September. That is not good news for the Reds. They will need to call up either Michael Lorenzen or Rasiel Iglesis to fill Bailey’s spot in the rotation.

FYI: Lorenzen started Friday and Iglesias started Sunday, so both could be available by Thursday. #Reds

Joey Votto went 0 for 5. I think he might be alright though.

Burke Badenhop entered the game in the 9th inning with a 9-2 lead, yet could not finish the game. He has really, really struggled this season. Badenhop’s failure to finish the game made Bryan Price go to Aroldis Chapman. You hate to use Chapman in a blowout game. Badenhop now has a 15.43 ERA this season. Yikes.

Bryan Price decided to bat Zack Cozart second tonight, to go along with Billy Hamilton in his usual leadoff spot. Since the start of 2014, Cozart has the worst OBP (.275) in the NL, while Hamilton has the 8th worst (.294). That is simply a bad idea to bat two guys in the first two spots who are two of the worst in the league at getting on base. I know that Price doesn’t have a lot to work with, but a move like that hurts run production.

As far as Zack Cozart getting off to a “hot start,” there is simply nothing to indicate that anything he has done in the first 18 games is sustainable. I wrote more about this topic before the season, and about the importance of batting your best players early in the lineup in The 2015 Cincinnati Reds Optimal Lineup.

Photos are courtesy of Kareem Elgazzar of the Cincinnati Enquirer, and are used by permission.