Homer Bailey allowed just two runs in 5.2 innings, and Marlon Byrd hit his first home run as a Red. It wasn’t enough though, as Kevin Gregg allowed the go ahead run in the 7th inning, and the Reds fell 4-2 to the Brewers. The Reds were still able to take 3 of 4 against the Brewers. The Brewers ended an 8-game losing streak, while the Reds fell back to .500 at 8-8 on the season. 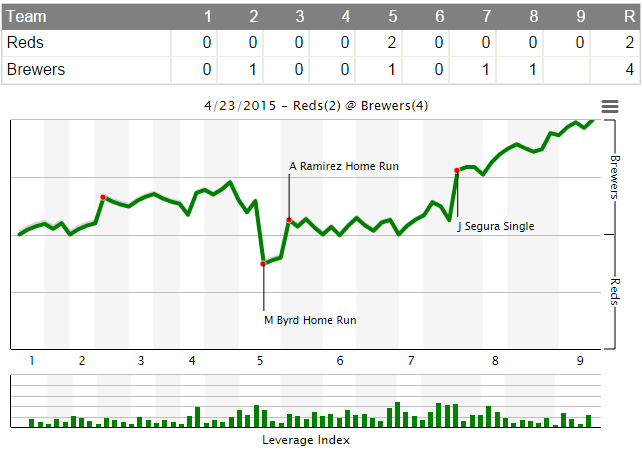 According to FangraphsÃ‚Â WPA statisticÃ‚Â (winning percentage added), the most important play of the game wasÃ‚Â Marlon Byrd’s 2-run home run in the 5th inning. That gave the Reds a 2-1 lead, and increased the Reds chances of winning by 27.4%.

Marlon Byrd hit his first home run as a member of the Cincinnati Reds in the top of the 5th inning off Kyle Lohse. Byrd is off to a miserable start for the Reds. Byrd entered Thursday dead last in the MLB in fWAR (-0.8). Byrd has been a “free swinger” to say the least. Byrd entered Thursday with the highest swing percentage in the MLB at 64.0%. Anyways, it was good to see Byrd hit one out of the park. The Reds will need a lot more of that this season, especially since he has yet to reach base via a walk this year.

Homer Bailey’sÃ‚Â velocity was way down today. His fastball only ranged from 89 to 92 MPH. Last season, Bailey’s average fastball velocity was 94.3 MPH (the highest of his career). The last batter Bailey faced, his velocity was 85, 82, 87, and 87. It was a good decision for Price to take him out of the game. I wouldn’t be too overly concerned about Bailey just yet. Brooks BaseballÃ‚Â had Bailey’s average fastball velocity at 93.5 MPH on Saturday in St. Louis. There is always a chance that the Brewers gun was off. I actually recall hearing the Brewers announcers saying the gun was messed up last night.

Bryan Price decided thatÃ‚Â Kevin GreggÃ‚Â was the best guy to come in the sixth inning with two on and two outs. Gregg was able to get out of that jam, but Price decided he wanted to roll the dice even more. Gregg pitched the 7th inning, and after allowing a four pitch leadoff walk to Logan Schafer (a guy with a .601 career OPS), he eventually allowed the go ahead run to score. Why on earth Gregg was given the opportunity to get four outs in a tie game, with a relatively fresh bullpen, is simply amazing. Aroldis Chapman hasn’t been given that opportunity in 2015.

Bryan Price decided to bat Zack CozartÃ‚Â second, and move Votto to the #3 spot (Frazier had the day off). Zack Cozart is off to a tremendous start (leads all MLB SS in fWAR, wRC+, OPS, and SLG). However, those stats only included 15 games. Cozart has a career .284 OBP. It is simply silly to bat him in the #2 spot, and give him potentially more trips to the plate than Joey Votto. Also, it seems like Hamilton and Votto have a good vibe hitting back to back, and Votto has even said he likes hitting behind Hamilton. I just don’t understand why Price would mess with that.

Where is Tony Cingrani?

Every current Reds reliever has pitched multiple times since Cingrani last pitched on 4/14.

Skip Schumaker leadoff the 9th inning (batting in the pitchers spot) while Todd Frazier and Devin Mesoraco sat on the bench.

Cardinals up 1-0 on the Nationals early

Reds begin a three game series in Cincinnati against the Cubs tomorrow night: