Through the magic of MLB.tv I was watching the Brewers’ telecast of last night’s game with the Reds. They were not particularly happy about all the home runs the Reds were blasting out of Miller Park. I must confess I took pleasure from their distress. One of the nice things about watching the other team’s feed is hearing their broadcasters instead of ours for a change of pace. It is interesting to hear their opinions on the Reds, which are often quite different than what we are used to hearing. One of the most frequent topics of discussion among other team’s broadcasters is how Great American Ball Park is extremely friendly to hitters and harsh on pitchers.

We have been led to believe that the reason why the Reds hit so many home runs is because of the ballpark just as much or even moreso than the talent of the Reds’ hitters. We have also been told that pitchers hate to pitch here. Homer Bailey has frequently cursed the ballpark after a bad game. I thought it would be interesting to dig into the numbers to see exactly how our local ball yard has affected the games over the years.

Some of the well-known baseball websites produce a statistic called the Park Factor. Unfortunately, the Park Factor statistic is kind of like WAR because everybody calculates it differently. FanGraphs, ESPN and Baseball Prospectus all have their own unique version of the Park Factor. There are probably others as well. I have made a chart showing the FanGraphs and ESPN park factors for each season of GABP. I also included the Home Run Factors: 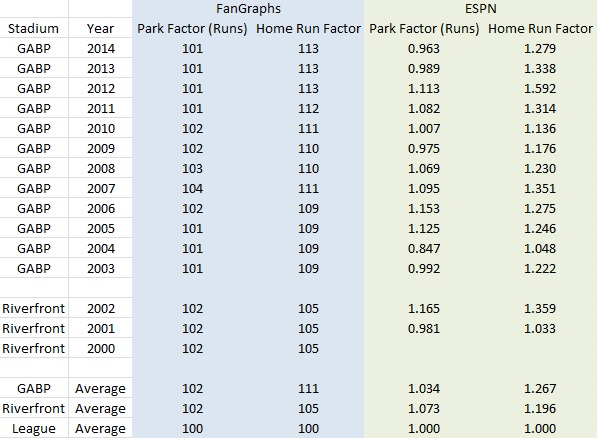 The league average Park Factor is 100 for FanGraphs. A number higher than 100 is friendly to hitters, lower than 100 is friendly to pitchers. The league average for ESPN is 1.000 but it works the same way. The FanGraphs numbers are very consistent from season to season, whereas the ESPN numbers vary wildly each year. That indicates to me that the FanGraphs method might beÃ‚Â better. Perhaps the ESPN method does not sufficiently differentiate the effect of the ballpark from the effects of the players’ hitting talent. The ballpark itself has not changed since it opened in 2003, so you wouldn’t expect the park factor to change much either. If the park remains the same the factor should remain the same as well, right? If the park is static and the park factor varies then there is something other than the ballpark changing the park factor. One season’s data may represent an insufficient sample size, so let’s use the average of all 12 seasons the Reds have played in the new stadium.

What this chart tells us is that GABP does boost home runs quite a bit, but it does not increase run scoring. The FanGraphs numbers show that home runs were boosted by 11% on average, whereas runs were boosted by only 2%. That makes GABP an essentially neutral ballpark in terms of run prevention. There are 11 parks with higher run factors than GABP (see below). The park does boost Ã‚Â home runs, but only by 11%. That is not such a huge difference is it? It is not like Adam Dunn would only have hit 20 home runs instead of 40 if he were playing in a neutral stadium. An 11% boost is not going to turn a slap hitter into a slugger. Yes it helps, butÃ‚Â it is not a worldchanger.

A mere 2% increase in scoring shows that pitchers should not be afraid to play here in Cincinnati. If a pitcher has a bad season here it is not because of the stadium, it is because of his lack of talent. A pitcher should expect to give up more home runs here than he would in most other parks, but home runs are not the only way to score runs. Players hit fewer singles, doubles and triples here than they do in a lot of other ballparks, and they also strike out more (see below).

Similarly, the reason Reds hitters have put up good seasons is not simplyÃ‚Â because of the park. That is something that I hear repeatedly when listening to fans and broadcasters of other teams: “Joey Votto only puts up great numbers because he plays in Great American Smallpark. VottoÃ‚Â shouldn’t be the MVP because his ballpark is too much of an advantage. Jay Bruce and Todd Frazier only hit home runs because they are in Cincinnati so they shouldn’t make the All Star team.” Guess what? Those arguments just don’t hold water. Great American is not the hitter’s paradise people think it is. This is not Coors Field East. This is an honest stadium where you have to be a truly good hitter to succeed.

Notice in the chart that GABP and Riverfront Stadium have the same park factor for runs. Both are also homer prone, especially Great American. Both of them show their reputations as hitters’ parks have been overblown. The ESPN data only goes back to 2001.

Here are more factors for GABP for all types of hits:

The reason the ballpark yields fewer non-HR base hits is because the outfield dimensions are smaller than the average field. There is less ground to cover in the outfield, which means that the outfielders have a better chance of catching a ball if it stays in the park. If the ball does fall in untouched it is less likely to roll all the way to the wall, and if it does roll all the way to the wall the fielders can get to it faster because the wall is closer. That leads to fewer triples and doubles.

In parks with huge outfields like San Francisco, Miami and Colorado; a ball in the gap is much more likely to result in a triple than it is in a ballpark with a small outfield like Cincinnati or Boston. This makes it easier to understand why GABP does not boost scoring even though it boosts home runs. The increase in home runs is offset by a corresponding decrease in singles, doubles and triples. 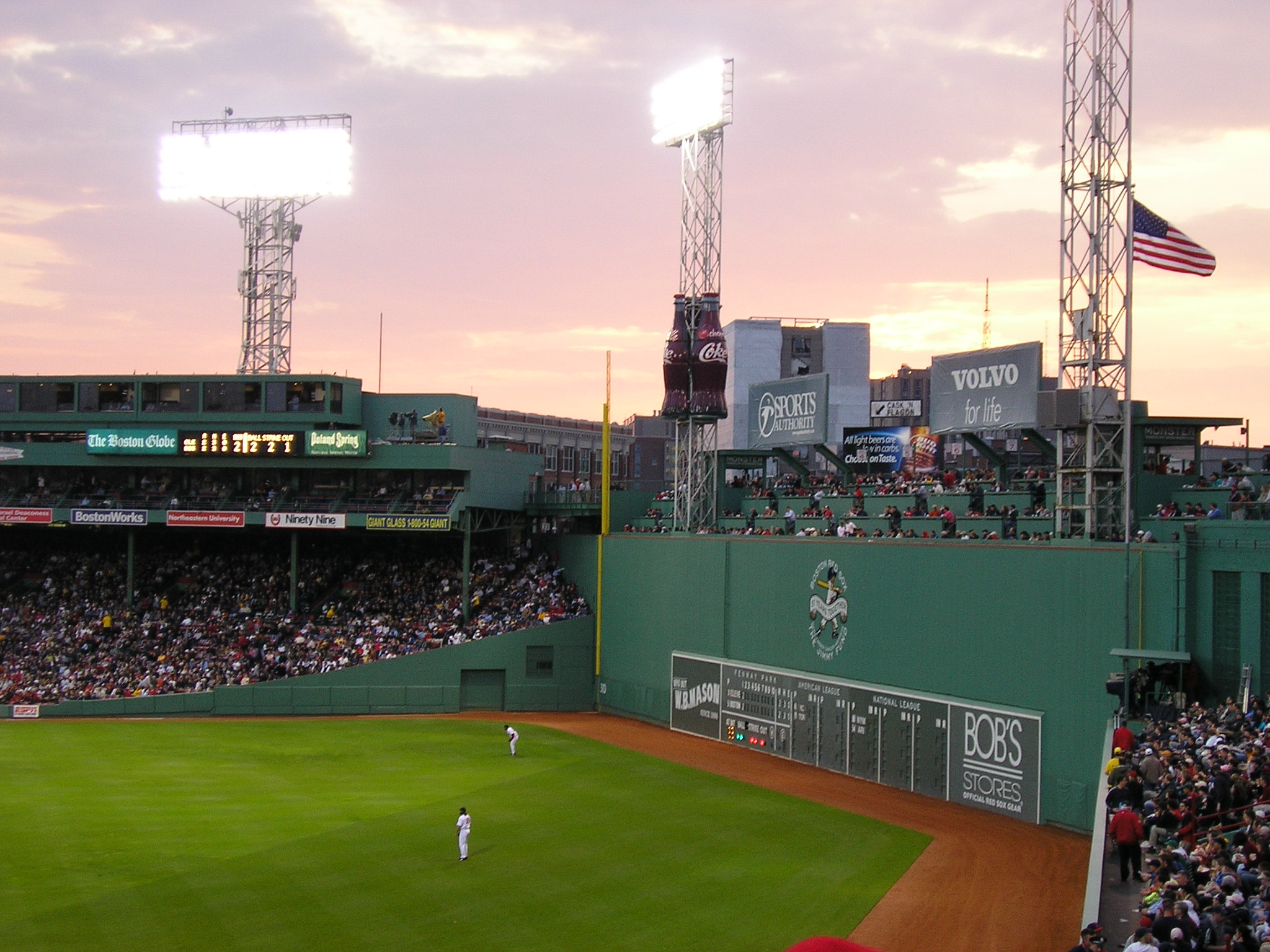 Boston has such a tiny left field that they had to build the 37Ã‚Â foot high outfield wall called the Green Monster to prevent short fly balls from becoming home runs. The wall cuts right through left field only 310 feet from home plate. But since the wall is so close, what would be a routine fly ballÃ‚Â to left field in any other park instead bounces off the Green Monster and results in an easy double for the batter. The same thing happens to low, deep line drives that would be home runs in most places. This results in a low HR Factor of 95 and a high Doubles Factor of 114 at Fenway Park.

One other interesting question is why does GABP boost strikeouts? The ballpark has no direct physical effect between the pitcher’s mound and home plate. All parks have identical pitchers mounds and they are all the same distance from the plate, so how does GABPÃ‚Â increase strikeout rates? The more cynical amongst you may suggest that the Strikeout Factor is high because the Reds have had a lot of whiffers in their lineups over the years. But that is not the reason. Reds hitters have struck out more at home than on the road, and visiting teams have struck out more here than elsewhere. The answer likely lies in the strategies that teams have adopted to contend with the high HR Factor. Pitchers do not want to pitch to contact in this ballpark for fear of giving up home runs. They feel they need to go for the strikeout more often. In other parksÃ‚Â like the Pirates’ PNCÃ‚Â Park or the Cardinals’ Busch StadiumÃ‚Â that do not allow many home runs, a pitcher who falls behind in the count may feel more confident to allow the batter to make contact knowing that he is unlikely to give up a home run. In homer-suppressing ballparks pitchers are more likely to pitch up in the zone. In homer-happy ballparks the pitcher will be more careful to keep the ball down. In essence, the reputation of the ballpark changes the mental aspect of the game just as much as the physical aspect. Teams have to adapt to the circumstances.

Now we know that Great American Ball Park does not boost run scoring very much at all. Let’s compare GABP to the other ballparks around baseball to see how we stack up:

Not surprisingly, Cincinnati sits in the middle of the pack. Most of the stadiums* in the league are very similar in terms of boosting or suppressing runs. There are only a few outliers. Coors Field in Denver is by far the most hitter-friendly stadium, boosting scoring by 17%. It is also the only park that allows more longballs than GABP. There is not a park that is pitcher-friendly to the same degree that Coors is hitter-friendly, but there are five ballparks that suppress scoring by 5% or more.

*(Pet peeve alert: I think theÃ‚Â plural “stadia” is pretentious. Does anyone actually say that? Grrrrr.)

Did you know that last year the Rockies led the league with 6.2 runs per game at home and were dead last in the league with 3.1 runs per game on the road? They scored twice as many runs at home thanÃ‚Â away! Their team has been built for success at home by selecting players that fit the peculiarities of Coors Field, but since their stadium is so much different than all the others their team is woefully unsuited for playing on the road. Visiting teams do not show such a large disparity when playing at Coors Field.

Why are the Brewers’ broadcasters complaining that Great American Ball Park makes it easy for the Reds hitters when their Miller Park is even more hitter friendly? Ã‚Â Hypocrites! It goes to show that sometimes reputations are not based in reality. Just because everyone thinks the Reds play in a hitter’s paradise does not make it true. The data show otherwise.

The Giants have won three of the last five World Series. They have done it with pitching and defense along with contact-oriented hitting and speed. They have designed their team to fit their ballpark. It would not make sense for them to field a lineup full of sluggers in a ballpark that suppresses power more than any other stadium. Their AT&T Park is the hardest place in baseball to hit a home run, which makes Barry Bonds’ record-setting home run exploits all the more remarkable. If he had played anywhere else how many additional home runs would he have hit? Maybe he wouldn’t have felt the need to take steroids?

Does this chart give us any insight as to why the Reds have struggled so badly to win in St. Louis? Busch Stadium suppresses home runs, which would hurt the Reds’ powerful lineup more than it would hurt the Cardinals, so that could be a factor. I don’t know though, if that were the reason then why have the Reds been much more successful in Pittsburgh even though PNC Park suppresses homers more than Busch? The Reds are also a much better defensive team than the Cardinals. Most of the losses have been close. I think the difference has been the better bullpen of the Cardinals the last few years.

Here is theÃ‚Â question I asked in the title of this article, how hitter-friendly is Great American Ball Park? The answer is it is only slightly friendly to hitters. It is essentially a neutral ballpark despite what we have been told over and over for years. The exploits of our hitters are completelyÃ‚Â legitimate. The follies of our pitchers during the Lost Decade cannot be blamed on the ballpark. The next time someone argues that GABP is a hitter’s dream and a pitcher’s nightmare you can set them straight!