The AL adopted the DH rule in 1973, in response to low offense, declining attendance, and the prodding of Charlie Finley. That one league adopted it and one did not is a relic of an era when the leagues were much more independent then they are now. I expect that the DH will be coming to the NL during the next Collective Bargaining Agreement (CBA), particularly since each team now plays 20 interleague games per year. The NLÃ‚Â held a vote on the DH in 1980, but the motion failed due to a comedy of errors unimaginable in the cell phone age. The Pirate GM (Harding Peterson) was told to vote with the Phillies. The Phillies GM (Bill Giles) was unsure how the Phillies owner Ruly Carpenter wanted to vote (he was on a fishing trip and couldnÃ¢â‚¬â„¢t be reached). The motion failed 4-5 with three abstentions. Had the Phillies and Pirates voted for the measure, the DH would have started in the NL in 1982.

I thought it might be fun to get in the time machine and speculate on who might have been some of the RedsÃ‚Â designated hittersÃ‚Â if the NL had joined the AL in passing the DH in 1973.

The first DH for the Reds in 1973 would have been Dan Driessen. Called up during the second half after posting and absurd .409/.474/.630 line at AAA Indianapolis, Driessen was inserted at 3B to replace a fading Denis Menke (.191/.364/.270). Driessen was a brutal 3B, but he was a good example of an underrated hitter; he was above average in most categories, but not outstanding in any.

That leads to one of the most interesting Ã¢â‚¬Å“what ifsÃ¢â‚¬Â in the history of the Reds Ã¢â‚¬â€œ if there had been a DH slot in 1977 available for Tony Perez would he have been traded? Bob Howsam was a disciple of Branch Rickey, who always believed it was better to trade a player a year too early as opposed to a year too late. Perez remained an effective hitter until he was 40, and he and Driessen had very similar years in 1977. Extending the career of an aging star was a common use for the DH, and keeping Tony in Cincinnati would have been an interesting and welcome possibility.

Another interesting potential Reds DH during the late 70Ã¢â‚¬â„¢s was Champ Summers. According to his SABR Bio by Scott Ferkovich, Summers signed at the advanced age of 25 as an amateur free agent by the AÃ¢â‚¬â„¢s even though he had only played about 35 games of college baseball. After struggling in limited trials for the AÃ¢â‚¬â„¢s and Cubs, he was acquired by the Reds in

February 1977 for a PTNBL. He spent 1977 with the Reds as a pinch hitter and again struggled in a 76 AB trial. Sent to AAA Indianapolis in 1978, Summers broke through with a fantastic season, posting a .368/.465/.665 line with 34 HR, 124 RBI and more walks than strikeouts. That earned him a September callup, and unlike his previous Ã¢â‚¬Å“opportunitiesÃ¢â‚¬Â, he was decent (119 OPS+) in 42 at bats. However, a slow start in 1979 resulted in the Reds trading him to Detroit for a PTBNL in May. Tiger Stadium was a perfect match for the lefty pull hitter, and Champ had a great 3 year run for the Tigers as a platoon outfielder (143 OPS+). With a DH rule in the NL, he would have had a place to play Ã¢â‚¬â€œ whether the Reds would have given him an extended chance is another question.

The 80Ã¢â‚¬â„¢s were a strange decade for the Reds, mixing contenders with some of the worst Reds teams in history. The DH would have been useful in the early 80Ã¢â‚¬â„¢s to provide a place for another aging star Ã¢â‚¬â€œ Johnny Bench. What is forgotten about the

regrettable 1981 season is that Bench had stopped catching after April in favor of first base. He pushed Danny Driessen out of his starting role in May but broke his ankle in a slide at second while he was hitting .343. Two weeks later the 1981 strike began. In 1982, the Reds traded Ray Knight to the Astros for Cesar Cedeno and somehow decided that a 34 year old player that had caught over 1600 games would be able to handle third base. Bench could still hit some (he was a league average hitter his last two years), but he was overmatched at 3B and retired at age 35.

In the early/mid 1980Ã¢â‚¬â„¢s the Reds farm system pumped out a huge amount of promising outfielders, including Gary Redus, Duane Walker, Eric Davis, Paul OÃ¢â‚¬â„¢Neill, Tracy Jones, Nick Esasky (who came up as a 3B and eventually moved to LF), and Eddie Milner. They had Dave Parker in place and a DH rule would have created some playing time for several of these

. However, the best hitter of the group was Kal Daniels who was essentially Joey Votto with speed (74 steals with a 79% success rate in his Reds career, and a .301/.406/.506 slash line), but he suffered from bad knees and bad routes in LF. He could not stay on the field, and the Reds traded him to the Dodgers in mid 1989 for Mariano Duncan and Tim Leary. His Reds career was short, but on a rate basis he was one of the best left handed hitters in team history (Ranking behind Votto and ahead of Joe Morgan in Reds career OPS+). Redus, Esasky, and OÃ¢â‚¬â„¢Neill also would have intriguing DH possibilities in the 80Ã¢â‚¬â„¢s.

The Reds acquired Glenn Braggs in June 1990 in a trade for Ron Robinson, who had been bumped from the Reds rotation. He turned out to be a valuable reserve on the 1990 World Champs and made a game saving catch in the 6th game of the NLCS. The stats say he was a decent but not a great hitter, but he was an intimidating one. How strong was Glenn Braggs? This strong. He would have been the Reds most likely DH in the early 90Ã¢â‚¬â„¢s. 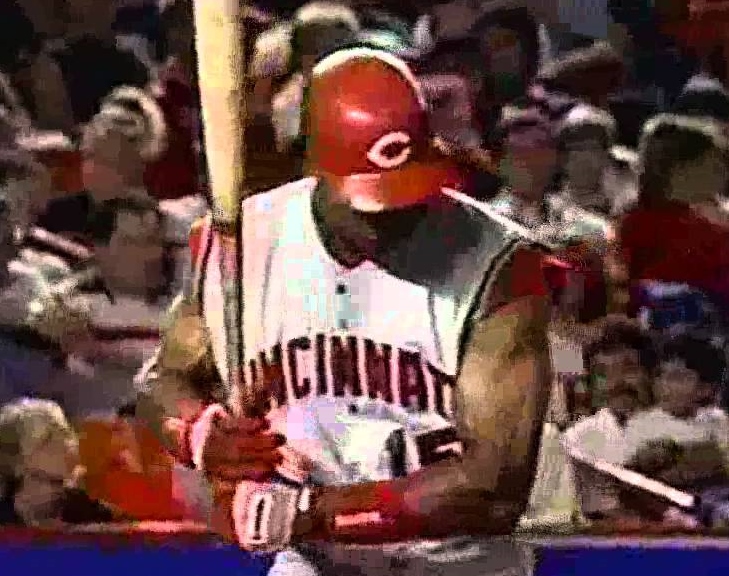 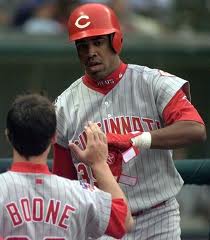 There are many ways to fill the DH position, and most teams now use it as a rotation of regulars to fill it (only four players had 400+ PA as a DH in 2014). From 1996-98, the Reds had an ideal platoon with Ed Taubensee and Eduardo Perez. Taubensee was a left handed hitting catcher who had defensive issues (but was highly regarded Ã¢â‚¬â€œ he was traded for Kenny Lofton and pushed Craig Biggio to 2B). Perez (yes, TonyÃ¢â‚¬â„¢s son) filled a role that doesnÃ¢â‚¬â„¢t exist often today due to 12 man pitching staffs Ã¢â‚¬â€œ that of the lefty masher. For his career, his OPS vs. left handers (.863) was .200 points higher than what he did against righties. As a DH platoon, they would have been very effective together. As was common then, the Reds didnÃ¢â‚¬â„¢t know what they had, releasing Eduardo in 1998 (he played seven more years in the majors).

Another player in the Ã¢â‚¬Å“lit up the minors but never got a chanceÃ¢â‚¬Â class was Roberto Petagine. A left handed hitting first

baseman, he put up .900+ OPS seasons in the minors like clockwork, but never got more than 152 PA in the majors. Acquired by the Reds in 1998 in a trade with Mets, he won the International League MVP (his second straight) withÃ‚Â a .331/.436/.617slash line with 31 homers and 109 RBI. Called up in August he had a good year (128 OPS+) in a limited trial, but the Reds sold him after the season to the Yakult Swallows in the Japan Central League. He became a major star in Japan, winning an MVP, two home run titles, and becoming the highest paid player in Japanese baseball. He returned to the states in 2005, but never received meaningful playing time. His minor league stats and time in Japan certainly suggest he was better than a AAAA hitter, but he never had a chance to prove it.

2000 to PresentÃ‚Â The Reds were loaded with potential DH candidates in the last 15 years. How does Joey Votto playing a full year in 2007 sound? (he spent most of the year in the minors). There were aging stars (Barry Larkin, Ken Griffey Jr.), sluggers that were challenged defensively (Russell Branyan, Jonny Gomes, Ryan Ludwick, Dante Bichette) and even Shin-Soo Choo (who was as bad a CF as he was a good hitter).Ã‚Â 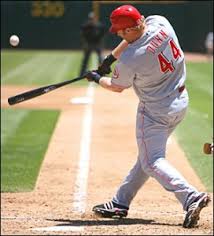 Of course, the Reds had the player that more than any was born to be a DH, the Big Donkey Adam Dunn. Dunn actually was not a horrible outfielder when he came up, but 2005 appears to be the point when his defense became a serious issue. The Reds had Chris Denorfia in their system and he would have been a major upgrade in left field (duh) and contributed offensively. Dunn remained a very productive hitter through 2010, and continued to contribute through the end of his career (with the exception of the lost year of 2011). He would have been the DH on the all time Reds All Star team had the possibility existed when he broke in.