I donÃ¢â‚¬â„¢t think anybody could be blamed for taking a little time to revel in the lopsidedness of the Mat Latos trade early on. Though most were lukewarm about shipping him out for the return of Anthony DeSclafani and Chad Wallach, LatosÃ¢â‚¬â„¢s comments about the clubhouse and the medical staff burned that bridge pretty quickly. Fast-forward to two starts into the regular season and Cincinnati is decidedly on the sunny side of this trade.

Heading into the season, there was some reasonable apprehension about whether DeSclafaniÃ¢â‚¬â„¢s repertoire is enough for him to stick as a major league starterÃ¢â‚¬â€in 2014 he leaned heavily on his fastball and slider, with his two-seamer, changeup, and curveball only used for a combined 12.9% percent of his pitches. DeSclafani abandoned that curveball pretty quickly after only really employing it in September of last season, admitting Ã¢â‚¬Å“it was a below-average pitch so I kinda canned it.Ã¢â‚¬Â

After forgetting about trying to throw a curveball, DeSclafani fixed his mechanics to improve his slider. As he mentioned in the Eno Sarris article linked above, Anthony altered his breaking pitch to spike it more and its now a little over three MPH faster (averaging 84.9 this year to last seasonÃ¢â‚¬â„¢s 81.7) with less movement overall. You can see here the difference in his release point between the two seasons:

His change in release point hasnÃ¢â‚¬â„¢t seemed to negatively affect the rest of his pitchesÃ¢â‚¬â€the velocity and movement of his four-seam fastball, two-seamer, and change have remained consistent between seasons. 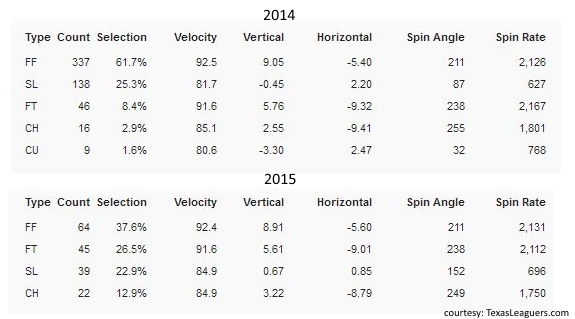 Obviously, one difference sticks out more than anythingÃ¢â‚¬â€DeSclafani is using his secondary pitches a lot more often so far in 2015. HeÃ¢â‚¬â„¢s throwing the two-seamer a lot more often (especially against lefties, throwing it 33.7% of the time to them, nearly equal to the number of four-seamers heÃ¢â‚¬â„¢s pitched to opposite-handed hitters) and his slider and changeup have become more effective. Not pictured in these tables are the zone and whiff rates on his pitches. HeÃ¢â‚¬â„¢s throwing his slider for more strikes and getting hitters to swing and miss on that and his changeup more frequently (23.1% whiff rate on his slider, 22.7% on the changeup) even though batters are swinging slightly less at those pitches.

ItÃ¢â‚¬â„¢s looking like Anthony DeSclafani has a better feel for his entire repertoire than he ever has in his professional career. Having confidence in four different pitches (three of which heÃ¢â‚¬â„¢s throwing over 20% of the time) goes a long to allay fears about his ability to stick in the rotation. As he continues to learn and refine his arsenal, DeSclafani may make a compelling argument for being placed a little higher in it in the near future.