Last week I discussed the types of pitches thrown by each member of the Reds’ starting rotation. This week I will go over the relievers. I described the various pitch types last week, including their movement and the grips pitchers use when throwing them. I will not go over that information again here this week, so you might want to read last week’s column before you read this one.

The chart above is drawn from last year’sÃ‚Â games. It shows the average speed of the pitcher’s fastball, the pitch types he uses and the rate at which he uses them. The pitch types were described in last week’s column.Ã‚Â You’ll notice that the chart does not contain a column for the gopherball pitch that Kevin Gregg and Jumbo Diaz have frequently been throwing this year, and that Hoover threw last year. 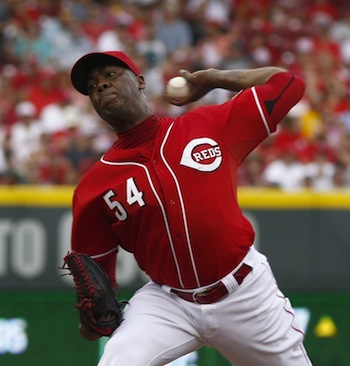 Aroldis Chapman — We all know the Cuban Missile is the hardest throwing pitcher in the history of baseball. Last year he became the first pitcher to ever average more than 100 mphÃ‚Â on his fastball. Chapman’s average of 101.1 mphÃ‚Â was 3 mphÃ‚Â faster than the second-fastest hurler, Ken Giles of the Phillies, who averaged 98.0 mph. Chapman throws the heater almost 70% of the time, but he has been slowly increasing his usage of the slider each season. Chapman was a 2-pitch pitcher until last year when he debuted a changeup with good results. Chapman’s slider and changeup both average about 89 mph, which is quicker than many pitchers’ fastballs. Batters hit only .153 vs Chapman’s fastball last year, and a comically woeful .063 vs his slider. Chapman did not allow any hits at all on the 70 changeups he threw, in fact only one of them was even hit into play. That one was a lineout to Todd Frazier by Adam Duvall. Note the 4-seam fastball grip in the photo, he’s bringing the heat. 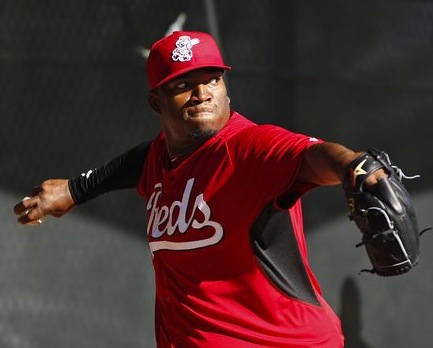 Jumbo Diaz — Here is another flamethrower. Diaz’s fastball averages a blazing 98.1 MPH, but unlike Chapman, Diaz only throws his 4-seamer about 40% of the time. His 2-seamer (sinker) is just as fast at 98.0 and offers a small amount of vertical drop at the cost of some control. Perhaps he should stick to the 4-seamer because hitters managed only a .164 AVG against it, whereas they thumped the sinker to the tune of a .385 AVG. Similarly, the whiff rate on Jumbo’s 4-seamer is 16%, which is decent. But the whiff rate on his sinker is a pathetic 5%. The sinker was a very bad pitch for Jumbo last year. So far this year the damage against Diaz has been done versus his 4-seamer and his slider, not the sinker. Diaz also makes extensive use of a slider and limited use of a changeup. The slider was quite effective last year. If you are paying close attention you are probably wondering “why did Nick say Ken Giles was the second-fastest hurler at 98.0 mph and then tell me that Jumbo Diaz averaged 98.1 mph?”. Good question. When I sorted the leaders I arbitrarily made the cutoff 45 innings and Diaz missed the cut with 34 innings. In the photo you can’t see the seams on the ball but that is likely a 4-seam grip. 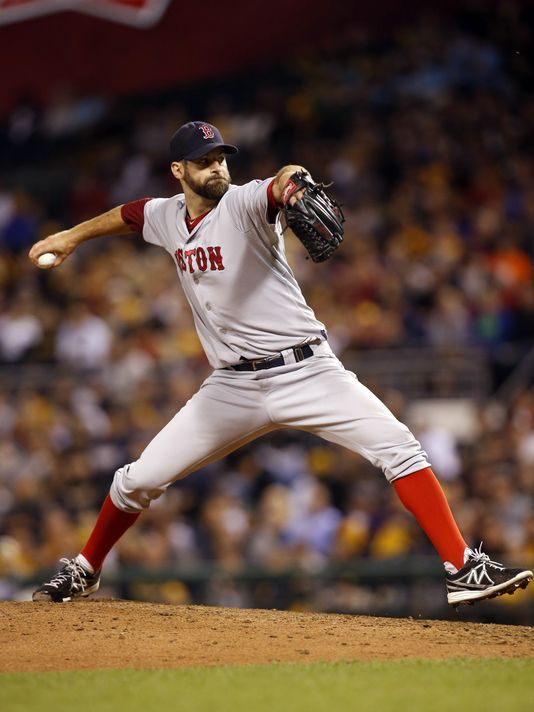 Burke Badenhop — This guy is not a flamethrower. In fact he doesn’t even utilize a 4-seam fastball. Despite having below average velocity he throws his sinking fastball 73% of the time. He is basically a fastball/changeup pitcher who mixes in an occasional slider. Badenhop is a groundball specialist whoseÃ‚Â 61% ground ball rate placed him in the top 10 out of 366Ã‚Â pitchers who threw 40+ innings in the majors last year. He will be brought into games when the Reds need a double play. The problem with ground ball pitchers is they allow higher batting averages. The good thing is they allow fewer home runs and generate more double plays. Batters hit .282 against Badenhop’s sinker last year, but only .231 against his slider, which is not a ground ball pitch for him. Badenhop does not strike out many batters. His 13.2% strikeout rate ranked him a woeful 350th out of those same 366 pitchers. The only pitch that generates swings-and-missesÃ‚Â is his slider. So in situations when Badenhop needs a double play (for example with a runner on 1st and less than two outs) we should expect to see a lot of sinkers. When he needs a strikeout (for example if there is a man on 3rd base with less than two outs) we should expect a slider. Badenhop is a guy you want on the mound in a double play situation, but you do not want him on the mound with a runner in scoring position. I can’t really tell the pitch grip in the picture, it is most likely a sinker and definitely not his changeup. 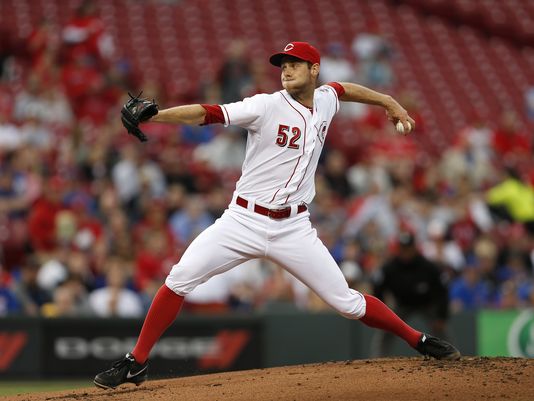 Tony Cingrani — The secondÃ‚Â of the three lefties in the Reds’ bullpen, Cingrani wields a fastball that hitters have a hard time measuring due toÃ‚Â the unorthodox whip-like delivery and the manner in which he hides the ball and cocks his wrist. When Cingrani first reached the majors in 2012 he was a one trick pony, throwing his fastball 90% of the time. Since then he has been increasing his slider usage and added a changeup to his repertoire. He still uses the heater 75% of the time, largely because his other pitches are just not very good. He has trouble throwing the slider for strikes and batters have hammered his changeup to the tune of a .345 batting average and .690 slugging percentage. The slider has been effective when he getsÃ‚Â it over the plate. Cingrani has been considered for the starting rotation, but until he improves his secondary pitches he simply does not have the arsenal required for a starting pitcher. The photo shows him throwing a 4-seam fastball, no surprise there. 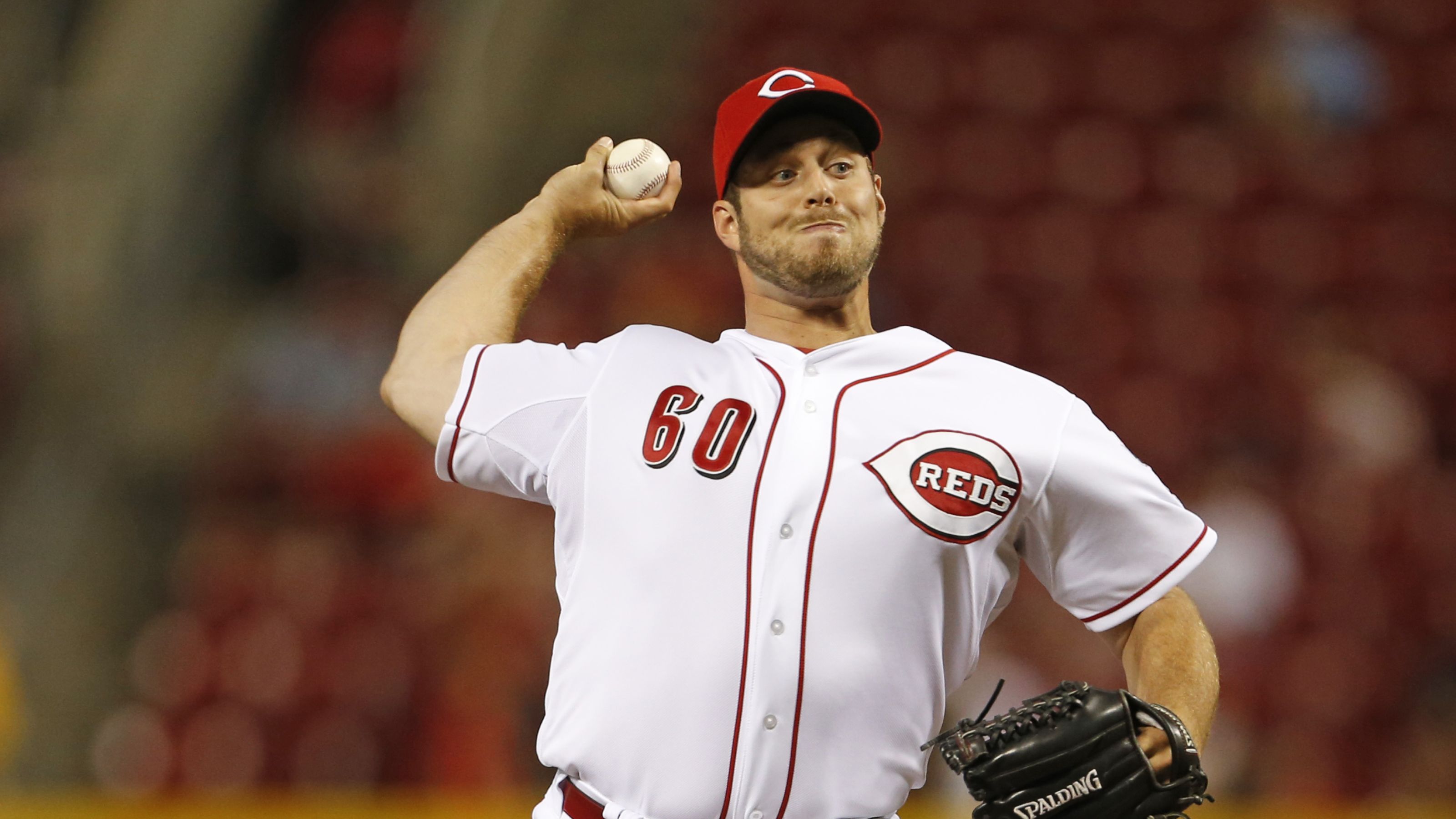 J.J. Hoover — Hoover gave up 13 home runs in 62 innings, with most of them coming on his curveball. Hoover’s stats were down across the board but other than his home run rate his peripherals were not that bad. Home run rates tend to vary wildly from season to season for most pitchers, so there is reason to hope that Hoover will yield much better results than he did last season. His strikeout rate of 27% was the best of his career and indicates that last year’s terrible ERA may have been somewhat of a fluke. Hoover has an above average fastball at 94 mph (league average is 92 mph). He reduced his heater usage from 75% prior to last season down to 65% in 2014. The main reason was because he added a slider to his arsenal. The slider ended up being his most effective pitch in terms of preventing base hits and generating whiffs. Unfortunately his fastball and especially his curveball took a dive. This season’s early returns indicate Hoover has doubled his slider usage and halved his curveball usage. Sounds like a good idea. Hopefully he can get back to theÃ‚Â sub-3.00 ERAs he put up in 2012 and 2013. You can clearly see the 4-seam fastball grip in the photo next to the goofy look on Hoover’s mug. 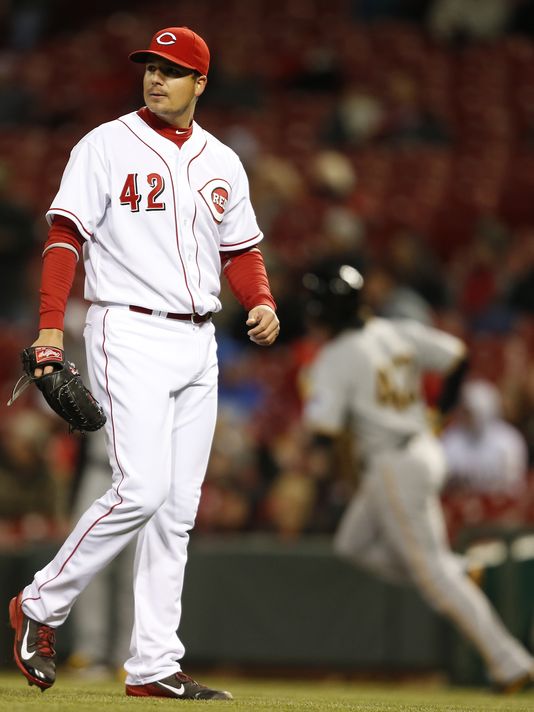 Manny Parra — The thirdÃ‚Â lefty in the bullpen, Parra is often considered a LOOGY, which is a slang acronym for Lefty One Out GuY. He is brought in primarily to retire left-handed batters with poor platoon splits. He has a surprisingly stiff fastball at 94 mph, which is especially impressive considering that lefties typically throw more softly than righties. Despite the excellent velocity, batters hit .322 against his fastball last year, which obviously is not good. The whiff rate on his fastball is not good. Parra complements his fastball by throwing a slider 42% of the time, which is by far the highest slider usage of any Reds pitcher. Parra uses a splitter in lieu of a changeup. His slider and splitter have been quiteÃ‚Â effective at generating swings-and-misses throughout his career, but without a decent fastball Parra cannot be expected to provide even mediocre innings for the Reds. Parra’s biggest problem is a lack of control. His 11% career walk rate is one of the worst in the league. Parra has been in the major leagues since 2007. His first season with the Reds in 2013 was by far the best season of his career and represents an anomaly, not the normal sort of production we should expect from Parra. Last year Parra was not very good at all, which fits right in with his entireÃ‚Â career sans 2013. The photo shows a batter circling the bases around Parra on Jackie Robinson day last year (hence the dual 42s). 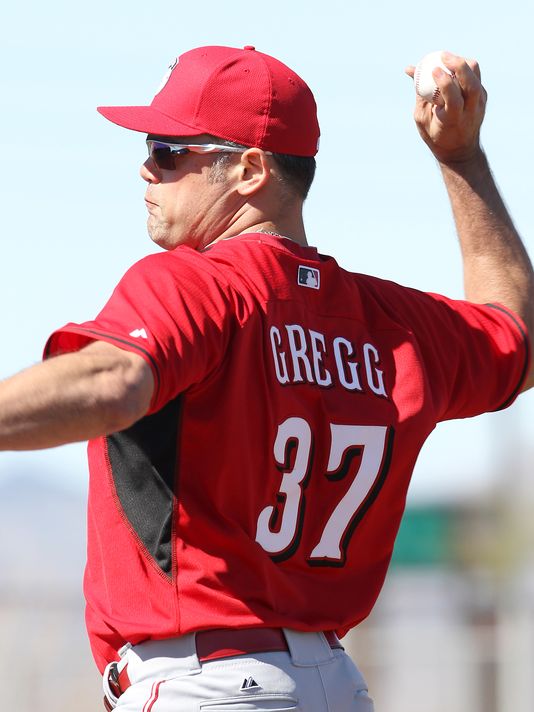 Kevin Gregg — The 36 year old has been in the majors since 2003 and has been gradually losing velocity ever since. Gregg was a flamethrower for several years and put together a pretty good career as a closer around the league. He has earned Saves with 6 different teams and is 8th among all active pitchers with 177 career Saves. But just in case you hadn’t noticed, Gregg seems to be a little bit past his prime. His fastball, once his greatest asset, is a shell of its former glory. Now at a below average 91.4 mph, the fastball simply doesn’t keep hitters honest any longer. Gregg used to be able to set hitters up with the fastball before dropping in a breaking ball to get the whiff. Gregg used to throw an effective cutter 25-30% of the time, but so far this year he has thrown only one cutter. (Remember the stats above are from last year.) Gregg historically has thrown a lot of cutters and curveballs, but this year his mix has switchedÃ‚Â to mostly fastballs and splitters (a type of changeup) with only a few curveballs. Perhaps he is not fully recovered from the arm troubles that caused him to miss almost all of last year. The flurry of home runs have come against his fastball. Even the few outs he has gotten have been drilled into the outfield. I can’t imagine the Reds will stick with him any longer. He is likely to be released or placed on the disabled list soon. The photo shows Gregg releasing a 4-seam gopherball.