Jason Marquis allowed five runs in four innings, as the Reds fell 5-0 in Chicago on Wednesday night. Marquis struggled from the very beginning of the game, allowing a leadoff double, followed by a two run home run by Anthony Rizzo. The 36 year old right-hander’s night also featured a bases loaded hit by pitch in the second inning. Former Red, Travis Wood dominated the Reds lineup, shutting the Reds out for seven innings. 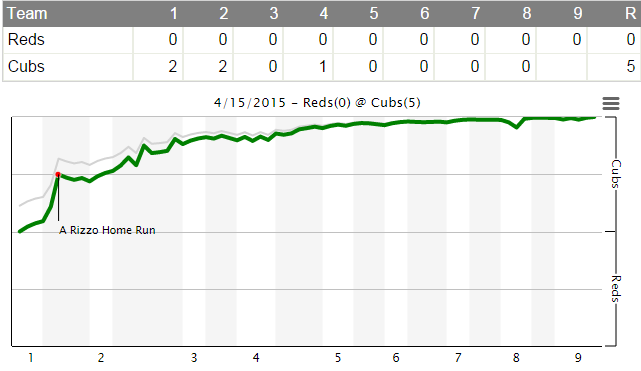 According to FangraphsÃ‚Â WPA statisticÃ‚Â (winning percentage added), the most important play of the game was Anthony Rizzo’s 2-run home run in the first inning off Jason Marquis.Ã‚Â That play decreasedÃ‚Â the Reds chances of winning by 14.1% (from 39.2% to 25.1%).

The ex-Reds dominated the Reds once again. Wood entered tonight with a 2.98 career ERA against the Reds in 10 starts.

Jason Marquis had a really bad start. Why exactly is this a positive? Let me explain…..If Marquis would have gone six innings and allowed four runs, someone could have confused that as an “alright start.” There was no confusion tonight. Marquis was absolutely terrible, and maybe, just maybe, if we are lucky it will push the arrival of Michael Lorenzen or the re-arrival of Raisel Iglesis back into the Reds roation replacing good ole’ Jason Marquis. It is simply inexcusable to have Marquis in the rotation. Expecting a 36 year old who hasn’t had an ERA below 4.00 in the last 11 years to be anything less than terrible is just silly.

Joey VottoÃ‚Â broke up a perfect game with a walk in the forth inning. Is he paid to do that?

Brandon PhillipsÃ‚Â broke up a no-hitter immediately following Votto’s walk with a single. Phillips had a good series against the Cubs, going 7 for 11.

Sadly, this probably wasn’t Jason Marquis last start for the Cincinnati Reds. If Kevin Gregg still has a roster spot, Marquis is probably safe for at least anther half dozen starts.

TheÃ‚Â Reds defenseÃ‚Â was a little shaky to say the least.

Pace of play alert: this game lasted a whopping 2 hours and 39 minutes.

The Cubs television broadcast is terrific. It is by far the best in the NL Central. My NL Central TV broadcast Power Rankings:

The Reds will have the day off on Thursday, before traveling to St. Louis for a three game series beginning on Friday. Sunday’s game will be at 8:00 pm, and televised on ESPN as part of Sunday Night Baseball. InÃ‚Â the Reds last 33 series in St. Louis, they are 3-28-2, dating back to 2003. The Reds will send Cueto, Bailey, and Leake to the mound this weekend.