Ã¢â‚¬Â¢Ã‚Â Thunderstorms have already begun in the Cincinnati area and are forecastÃ‚Â through Thursday evening. We may have seen the last of the Pirates series (sweep!). If both tonight and tomorrow afternoon’s games are rained out, what should Bryan Price do with the starting rotation against St. Louis this weekend? The Reds play the Cardinals Friday, Saturday and Sunday at Great American Ball Park.

Ã¢â‚¬Â¢ If tonight’s game does take place, it features a match-up between Mike Leake and Gerrit Cole. Leake (Arizona State) and Cole (UCLA) squared off against each other in an important college game in 2009. (Hat tip to Joel Luckhaupt, who dug up the historical nugget.)

Ã¢â‚¬Â¢ C. Trent Rosecrans may have published the human interest story of the year related to the Reds. Catcher Devin Mesoraco had a few maple trees in his Pennsylvania backyard surveyed and cut down to be used to make a few of his baseball bats.

In the end, there were 12 bats Mesoraco will use throughout this season Ã¢â‚¬â€ the DM 814 models are the ones from his house, the 814 representing his area code.Ã‚Â Marucci noted he may shed a tear each time one of those 12 bats breaks throughout the season, because each one seems so special. Mesoraco said he’s excited to use them, as they were shipped straight from Baton Rouge to Cincinnati, ready for Opening Day.Ã‚Â And the Reds’ catcher also knows much more about his bats now, sharing a closer bond than maybe any other professional athlete and his equipment. (C. Trent Rosecrans, Cincinnati Enquirer)

Seriously, straight out of the natural, minus the lightning bolt.

Ã¢â‚¬Â¢ Todd Frazier gets home town love, as his high school coach at Tom’s River South reflects on his former player. He says that nothing SuperTodd does surprises him now.

Frazier was playing in a wood-bat league down the Jersey Shore, and (Glen) Gardner asked to see the bat Frazier used during the game.Ã‚Â “Everyone uses a 33 (inch bat). That’s what 99 percent of them use,” Gardner said. “He gave me his bat and it was a 35. I remember looking at him like, ‘You swing this?’ and he told me his brother, Jeff, gave it to him. But he swung it like it was easy.Ã‚Â Even when I was older 34 1/2 was the most I could swing. But he swung a 35 as a sophomore so easy. They say in baseball you have to be strong from your elbows to your hands in order to hit. That’s the most important to place to be strong. To swing that bat, he was strong. My mind was already made up about him anyway but it reinforced it to me.” (Keith Sargeant, NJ Advanced Media) 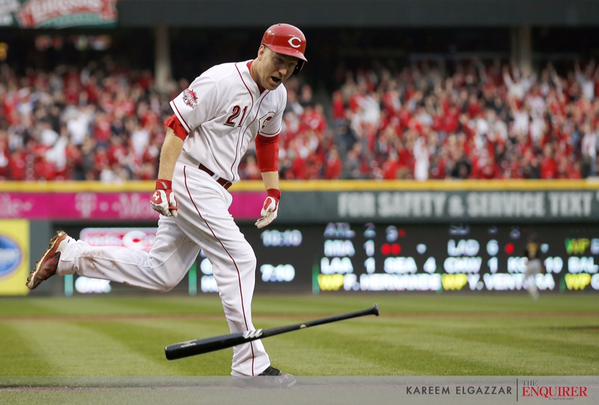 Ã¢â‚¬Â¢ Overlooked in the commentary about Bryan Price’s management of the bullpen was the success of his new lineup, particularly his new-fangled top of the order. Billy Hamilton got on base twice and scored both times. Joey Votto delivered two hits, moving Hamilton from first to third in the third inning where the Reds lead-off hitter was able to score on a balk. Votto and Hamilton both scored on #3-hole hitter Todd Frazier’s game winning homer in the bottom of the eighth.

Ã¢â‚¬Â¢ Votto’s play overall indicated his return to health. His teammates noticed the difference and know the importance of that.

If seeing is believing, well believe it.Ã‚Â Monday was a vintage version of Votto.Ã‚Â “When he’s going right, he checks those swings, he holds them back, he sees pitches,” said Frazier, “and when he’s hitting the ball to left field we’ve got a great opportunity.”Ã‚Â That was Votto in the eighth inning. He fell behind in the count against Watson with a foul ball and a called strike only to fight back and force the count full, including successfully checking his swing on a 2-2 pitch. Votto had faced Watson 16 previous times in their careers. He had three hits, three walks and three strikeouts in those plate appearances. (Kevin Goheen, Fox Sports Ohio)

Ã¢â‚¬Â¢ Speaking of the bullpen. Mike Petriello (FanGraphs) dove into the 8th inning use of Kevin Gregg over Aroldis Chapman.

We have him (Kevin Gregg) as being a replacement-level reliever for the last seven years in a row. And, well, he has been: Cincinnati is his seventh different stop since leaving Anaheim following the 2006 season. All of our projection systems see him with ERA and FIP north of four; thereÃ¢â‚¬â„¢s really nothing, not in 2014 performance or 2010-14 performance or 2015 projections or age or anything at all that makes him more appealing than Sam LeCure, himself a flawed reliever, sent down to Triple-A last week Ã¢â‚¬â€ except for saves, that lovely destructive junk stat that has been ruining bullpen decisions for years.

Ã¢â‚¬Â¢ If you missed the Opening Day rendition of the Star Spangled Banner, it’s worth watching. Marlana VanHoose, an 18-year-old from Denver, KY, has a remarkable story.

Marlana VanHoose, who opened the Reds’ first home game with the national anthem Monday, could not see the crowd she was singing for. She couldn’t even watch the game.Ã‚Â But she could hear it — and the crowd sure heard her.Ã‚Â VanHoose has been blind since birth and has cerebral palsy, but the 18-year-old from Denver, Ky., has made a name for herself singing “The Star-Spangled Banner” at sporting events, and it’s getting her attention on the national stage. (Pat LaFleur, WCPO)