One game does not make a season — for teams or players.

But today’s game sure felt like a microcosm. It seemed like a battle between the Reds regular players and their fringe veterans more than between the Reds and the Pirates. Johnny Cueto and Jay Bruce put the team in a position to win only to see their efforts undercut by one of the fringe veteran and bench players who were signed to minor league contracts in the offseason. Fortunately, other Reds regulars, Billy Hamilton, Joey Votto and Todd Frazier bailed out horrendous roster management and decision making by Bryan Price.

In the ninth inning, Marty Brennaman recounted one of Joe Nuxhall’s old adages. You can’t go undefeated if you don’t win the first game.Ã‚Â The Reds won today 5-2 and are 1-0. The record regular-season crowd of 43,633 went home excited by the happy ending.

But it sure felt like we’ll see that tug of war between the regulars and fringe players time and again.

If this season is indeed the Final Act for Johnny Cueto in Cincinnati, the first scene was worthy of a Tony Award. Cueto dominated the Pirates for 100 pitches. From the 90 mph first-pitch fastball to Princeton high school’s Josh Harrison to the 93 mph fastball to Jordy Mercer to end the seventh inning, Cueto was masterful. 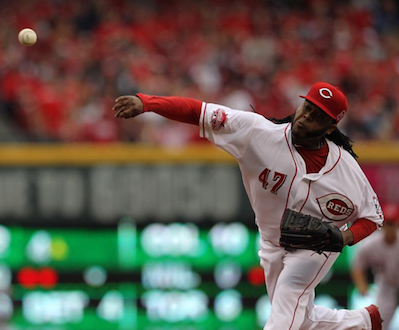 Jeff Brantley explained that Cueto was doing a great job of varying his speed and location throughout the game. Cueto allowed 4 hits and one walk while striking out 10 in seven innings.

Okay, Reds: just give Cueto all the money.

The Reds glittering defense showed up on Opening Day. Todd Frazier saved a run with a diving play on a ground ball down the third base line. 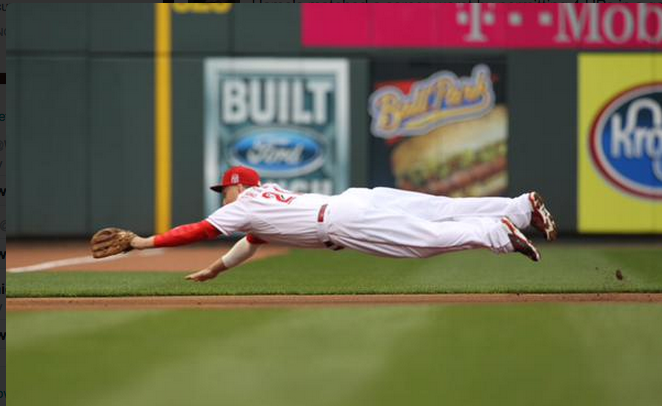 Frazier wheeled and threw to first where Joey Votto made a great stretch and short-hop pick to record the out.Ã‚Â Billy Hamilton raced in and dove to rob Starling Marte of a single in the fourth inning. In the eighth inning, Hamilton raced backward to catch pinch hitter Andrew Lambo’s deep fly ball to dead center. Marlon Byrd made a nice play on a deep fly ball in the eighth inning.

Jay Bruce turned a Liriano 95 mph fastball around and blasted it 400 feet over the right field fence.

Todd Frazier crushed (432 feet) a home run off of LH Tony Watson in the bottom of the eighth for the game winner. It knocked in Billy Hamilton and Joey Votto who had each singled.

Kevin Gregg is awful. Anyone who can read his player page at Baseball-Reference or FanGraphs knows that. In his long career, Gregg has never been all that. He bombed in the second-half of 2013 and was ineffective, hurt and had surgery last year. Walt Jocketty should never have signed him. Bryan Price shouldn’t have used him in the 8th inning with a narrow lead on Opening Day. And Price sure should have lifted Gregg before allowing him to face Andrew McCutchen. There is absolutely no evidence to justify the way the Reds have handled him. Veteran worship and established closer rep above all else.

Bryan Price said during spring training that he’d consider using Aroldis Chapman for more than one inning this year. So much lip service. Chapman had pitched two-inning stints all of March and the Reds have an off day tomorrow. Chapman wasn’t even warming up in the eighth when Jumbo Diaz was pitching. The brain-dead Closer Rules are a nemesis for other teams, not just the Reds. But it’s worse, of course, when your closer is the best pitcher in baseball. Chapman struck out two of the three batters he faced.

Marlon Byrd struck out in his first three at bats.

That’s out of 12 total pitches. Maybe Francisco Liriano just has Byrd’s number. Then again, Byrd had the third highest strikeout rate in the National League last year, so the Reds should expect the opposite of plate discipline from him.