Bryan Price just came out with what will be his opening day lineup: Hamilton, Votto, Frazier, Mesoraco, Byrd, Bruce, Phillips, Cozart. I would give Price a B+ on that lineup. There are a lot of MLB managers who wouldn’t bat their best hitter second, but Bryan Price is doing just that. Price also made the difficult decision of batting his declining star Brandon Phillips 7th. Actually, maybe on second thought I should give Price an A-. I still believe there is some room for improvement.Ã‚Â That is why for the second consecutive season I will give you the optimized Reds lineup.

Last season, my optimal lineupÃ‚Â was: Hamilton, Votto, Frazier, Bruce, Phillips, Ludwick/Heisey, Mesoraco, Cozart, and the pitchers spot. I got some quibbles when I said that Todd Frazier (who had a .234 AVG in 2013) was the Reds third best hitter going into 2014. Frazier of course ended up being the Reds best or second best hitter in 2014, right along side with Devin Mesoraco. This years lineup will be drastically different than last season.

Here is what I said last year (and it still remains true) about an optimized lineup:

First, you must read Optimizing Your Lineup By The Book. That is the primary basis for my optimal lineup that I will give you. You may ask if lineups really matter all that much. Well, according toÃ‚Â The Book:Ã‚Â Playing the Percentages in Baseball, an optimized lineup can create an additional 10-15 runs per season. An addition 10-15 runs could certainly net you a few additional wins, and a few additional wins could be the difference between reaching the playoffs, or just barely coming up short.

Attacking the pitcher early is very important. In 2014, NL pitcher splits by inning are astounding.

This is why I believe that you simply can not give outs away in the first inning.

Here are some important numbers to consider about the Reds lineup. wRC+ is the best measure of players overall offensive value. Since projections don’t have wRC+, wOBA is very similar and the next best method. 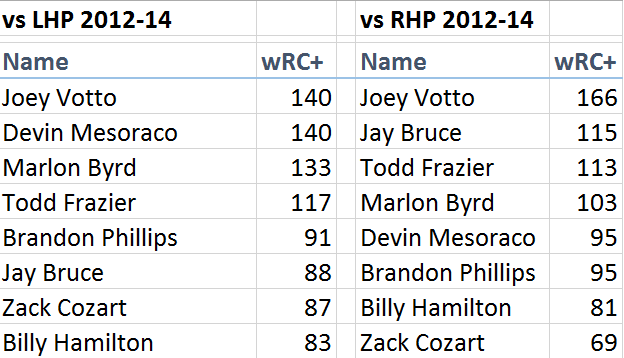 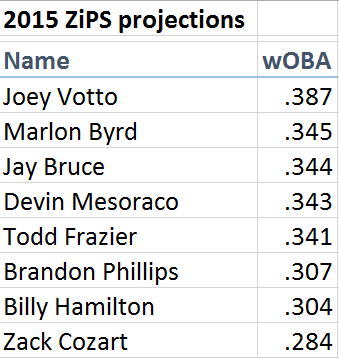 Based on all of the information we have available, here is the Reds most optimal lineups vs LHP and RHP: 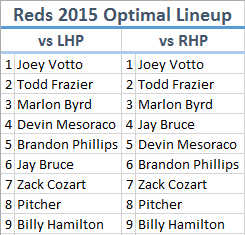 Here is the breakdown:

Joey Votto is the best choice to hit leadoff for the Reds right now. Steve Mancuso made the argument for this last season. Votto’s best spot would be #2 on most teams, but the Reds simply do not have a high on-base guy not named Votto. Joey Votto’s OBP projection is .417 in 2015 according to ZiPS. The next best on the team is Devin Mesoraco at .327 and Jay Bruce at .326. It is certainly not conventional to bat your best hitter leadoff, but for the Reds it would be the best option. Instead of criticizing Votto for what he isn’t (which really is not all that much), the Reds should utilize Votto’s best attribute in the most efficient way.

I put Todd Frazier here for both LHP and RHP because he has proven to be an above average guy at getting on base. Last season, Frazier was the Reds best hitter over the course of the entire season (Mesoraco was better in a bit of a limited sample size). Not only can Frazier get on base, but he has the power to drive the ball. That is important because the guy hitting ahead of Frazier will be getting on base over 40% of the time.

This is the conventional spot where you would put your best hitter, but data shows it actually isn’t all that important. I do however think if a team actually utilized their #1 and #2 spots properly, that there would be a lot more important at bats for the #3 hitter than mentioned inÃ‚Â Optimizing Your Lineup By The Book.

Devin Mesoraco and Jay Bruce are the Reds two best sluggers vs LHP and RHP respectively. You want your best sluggers to hit in this spot. That is why they are here.

Phillips appears to be a better hitter vs LHP than Bruce, so that is why he gets the nod here vs lefties.

The Zack Cozart show hits 7th. One thing that would help Cozart hitting in front of the pitcher would be that he will see more balls, and should be able to raise his OBP a bit.

By batting the pitcher here, you make Billy Hamilton your leadoff hitter from the second time through the order on. You also don’t want your pitcher batting directly in front of you best hitter in Joey Votto.

Billy Hamilton has proved his worth as an everyday MLB player from his incredible defense. He however has not proved he is a leadoff hitter in the MLB. Hamilton only had a .292 OBP in 2014, and has a .255 OBP this spring (through Friday). The average OBP in the NL in 2014 (which includes pitchers!) was .312. There is simply no reason a guy who has proven to be below average at getting on base should be hitting in the one spot where getting on base is the most important thing.