I attended the 4th annual SABR Analytics Conference recently in Phoenix, and it was an interesting combination of fan convention and job fair/trade show for MLB analytics departments. The convention agenda bordered on overwhelming with over thirty interviews, panels, presentations, and awards crammed into two and a half days, and 450 (!) attended. You can visit the SABR website for highlights, commentary and links here.Ã‚Â  HereÃ¢â‚¬â„¢s a few of the things I learned from my immersion into the world of analytics during the conference.

The acceptance of analytics within MLB has grown substantially the last two years. This was the theme of Brian KenneyÃ¢â‚¬â„¢s keynote address. He saw the success of the Pirates as the tipping point Ã¢â‚¬Å“one could explain away the AÃ¢â‚¬â„¢s and Rays as long as they didnÃ¢â‚¬â„¢t win a World Series, but when the Pirates started winning that was different.Ã¢â‚¬Â In addition, conference attendees from a couple years ago were now employed by major league teams. Despite the opinion of certain announcers, the trend toward more analytic usage will continue Ã¢â‚¬â€œ it was pointed out at the baseball operations panel that todayÃ¢â‚¬â„¢s players are generally comfortable with computers and data, and they will soon be coaches and managers.

Teams are very focused on granular analytics that help prepare for the game that night. Video scouting, hitter/pitcher tendencies, and defensive shifting are the major focus in the constant search for an edge over the opposition. B Sports (formerly Bloomberg Sports) demonstrated an intuitive iPad system that would automatically load video and data for every pitch for every matchup for an upcoming series, which could be filtered by pitch type, outcome, or count. It included email functionality that would allow a coach to email selected pitches to individual hitters to help inform their approach. While use of this type of tactical information is growing it is certainly not universal Ã¢â‚¬â€œ there were several comments to the effect of Ã¢â‚¬Å“some players are stubborn/not that smart/donÃ¢â‚¬â„¢t make adjustments easily.Ã¢â‚¬Â Despite increasing usage, many teams donÃ¢â‚¬â„¢t like to talk about their usage of analytics, at least in part to empower their players. It was noted that any proprietary advantage a team might have tends to disappear fast. Baseball teams copy what works, and front office personnel tend to move around from team to team; new knowledge and approaches spreads quickly.

It is very difficult to integrate advanced analytics into TV broadcasts. Ã‚Â Steve Berthiaume, Joe Block, Doug Glanville and Josh Suchon discussed the usage of analytics in broadcasts. There was general agreement that is difficult to use them properly, particularly during a game. To introduce advanced stats, one has to explain it, provide context, and hope it fits the storyline of the game (a lot of pre-game preparation never makes the broadcast). It is also crucial to have executive buy in from network executives. It wonÃ¢â‚¬â„¢t be surprise to anyone reading this, but it was noted that advanced stats can be polarizing, and feedback is frequently negative. Berthiaume noted that in general, the TV audience is not a big fan of different. However, at one time RBI was different.

In the early days, Sabermetrics was not accepted by SABR. One of the most interesting panels was on the Origin of Analytics, which featured sabermetric pioneers Pete Palmer, John Dewan, Dick Cramer, and John Thorn. In its fledgling days, SABR was primarily focused on baseball history. When Palmer and Cramer proposed starting a Statistical Analysis committee in the early 70Ã¢â‚¬â„¢s, the head of the organization limited them to one paper every two years in the SABR journal. For a long time, they were the Statistical Analysis committee. It is remarkable what they accomplished in the pre PC days (to name a few, inventing OPS, debunking clutch hitting as a skill, understanding the importance of pitch counts). Cramer noted that as late as 1987, he had to wait until December to find out leaders in batter walks. We have made some progress since then.

There is no shortage of innovative new research. Jason Wilson of Biola University presented a new method to quantify pitch effectiveness. Their new metric (we need more acronyms) QOP calculates pitch effectiveness based on velocity, trajectory, location, horizontal break Ã¢â‚¬â€œ allowing them to get beyond velocity and help remove subjectivity from the evaluation of breaking pitches. The have six years of data (over 5 million pitches) scored with the metric and hope to sell current season data to MLB teams. Another study quantified command by measuring where the catcherÃ¢â‚¬â„¢s mitt was at release. Understand DIPS? Ben Jedlovec of Baseball Info Solutions presented DIBS Ã¢â‚¬â€œ Defense Independent Batting Statistics. By tracking velocity for ground balls, and hang time and distance for flyballs, found that trajectory based batting stats were a better predictor of future performance than batting runs, and had the potential to also provide better park effect adjustments. Baseball Info Solutions also carefully studied who was responsible for called strikes (the pitcher, batter, catcher, or mpire) and found that elite pitch framing catchers could be worth up to 15 runs a year. It was fascinating to see the ways that the torrent of new data was being applied to provide better insights. Speaking of innovation, I donÃ¢â‚¬â„¢t want to forget the back of a Bowman Chrome card: 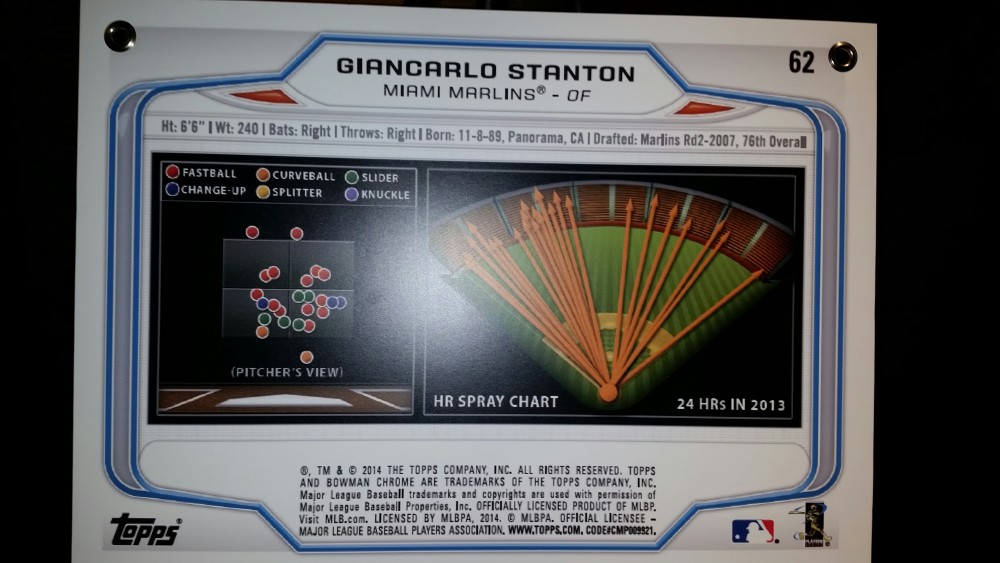 Who needs stats, now we have baseball cards with spray charts and hot zones!

The Reds donÃ¢â‚¬â„¢t hate sabermetrics. While the analytic inclined among us have occasionally (frequently?) questioned a Reds move, it was clear from the conference that Reds are active even if they donÃ¢â‚¬â„¢t talk about it much. Sam Grossman, the Reds Director of Baseball Research and Analysis was on a Baseball Operations panel. He talked about the biggest challenge of his job (presenting data in useful forms), the split between analytics and scouting in the office (there wasnÃ¢â‚¬â„¢t one), and that park effects were a consideration when filling out the back end of the roster. He also touched on the decision process behind the Latos acquisition (his high K and swing and miss rate would trump his flyball tendency) and acquiring Simon (the higher competition level of the AL East and stuff made him an attractive target despite mediocre results with Baltimore). In addition, the Reds were one of eight teams to sponsor the conference. Take that Marty!

Overall, it was an informative three days and I would recommend the conference if you have an interest in baseball analytics (the Sloan MIT Conference covers multiple sports and has 3000 attendees). Brian KenneyÃ¢â‚¬â„¢s summary did a good job of capturing theÃ‚Â  conference.Ã‚Â  See you in Phoenix in 2016.