We all know that Johnny Cueto was fantastic last year. He finished as the runner-up in the Cy Young Award balloting. Cueto’s season line of 20 Wins, 9 Losses, 2.25 ERA, 0.96 WHIP and 242 strikeouts in 243.2 innings was not good enough to win the award in 2014, but it was plenty good enough to win the Cy Young most seasons. Unfortunately Cueto suffered theÃ‚Â bad luckÃ‚Â of running into theÃ‚Â DodgersÃ‚Â buzzsaw named Clayton Kershaw who produced a 21-3 record, 1.77 ERA, 0.86 WHIP and 239 strikeouts in 198 innings.

It is not the first great season Cueto has had. I thought he should have won the Cy Young in 2012, which was the year knuckleballer R.A. Dickey of the Mets took home the hardware. Cueto’s stats that year (19-9, 2.78 ERA, 1.17 WHIP, 170 Ks in 217 innings) were not quite as good asÃ‚Â Dickey’s (20-6, 2.73 ERA, 1.05 WHIP, 230 Ks in 233.2 innings) but Cueto faced the disadvantage of pitching half his games in a ballpark that is much less friendly to pitchers than Dickey’s home field. That notion was reflected in their ERA+ scores, which is a form of ERA that is adjusted for the pitcher’s league and ballpark. 100 is a league average ERA+ with higher scores being better. Dickey’s ERA+ in 2012 was 139 while Cueto’s was 148 — a clear advantage for our guy. Cueto actually came in 4th in the balloting that year behind Dickey, Kershaw and Gio Gonzalez of the Nationals. For the record, Cueto’s ERA+ last year was even better atÃ‚Â 160 but Kershaw’s was a whopping 197!

I thought it would be interesting to compare Cueto’s fantastic 2014 season to the best seasons in franchise history. I would like to know just how historic Cueto’s epic season was among theÃ‚Â well over 100 years of Cincinnati baseball. So let’s dig into some numbers to find out…

The first thing I realized was that I should exclude the Dead Ball Era prior to 1920. Pitchers in those days would throw 300 or 400 innings with an ERA below 2.00 on a regular basis. For example, check out the 1879 season for Will “Whoop-La” White of the Cincinnati Reds. The Reds only played 81 games in those days, White started 75 games and completed every single one of them. White was the only pitcher on the team but fourÃ‚Â position players pitched a total of 46 innings. White threw 680 innings and finished with a 43-31 record and a 1.99 ERA. He accumulated only 232 strikeouts in all those innings, but foul balls didn’t even countÃ‚Â as strikes back then. The reason his ERA was so good was because he gave up 404 runs but only 150 of them were earned! I guess teams made a lot of errors back before baseball gloves were invented. WhiteÃ‚Â gave up only 10 home runs in those 680 innings and I bet most of them were of the inside-the-park variety. Even though White’s ERA was only 1.99 that season his 120 ERA+ was not outstanding because almost all pitchers had really low ERAs, proving that dead ball stats simply do not translate to the modern era. White did go on to have a 171 ERA+ season in 1882 with a 1.54 ERA in 480 innings. Coincidentally, Johnny Cueto also put up a 171 ERA+ season. He did it in 2011, when he went 9-5 with a 2.31 ERA in 154 innings.

Here are the best seasons by ERA+ for Reds pitchers in the Live Ball Era (since 1920): 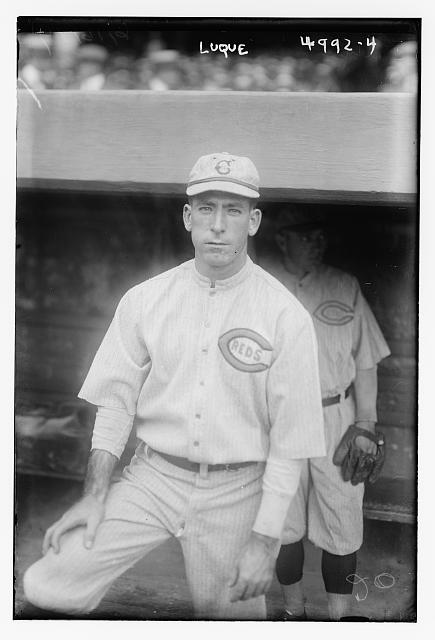 Dolf Luque is a member of the Reds’ Hall of Fame. He was known for his curveball and his temper. He pitched two games in relief during the Reds’ victory over the Chicago White Sox in the 1919 World Series. Luque was a well above average pitcher for many years, but that 1923 season was the hallmark of his career. He went 27-8 that year with a 1.93 ERA in 322 innings. He led the league in both Wins and ERA. Clearly the best season any Reds’ pitcher ever had. Luque was a blue-eyed caucasian player from Cuba, one of several Cubans who were allowed to play in the major leagues in an era when non-whites were not welcome. 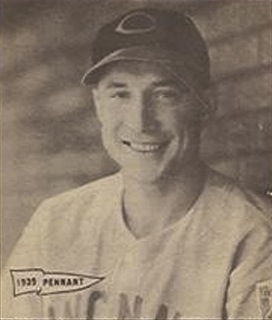 In 1939 Bucky Walters led the league in all these categories: 27 Wins, 2.29 ERA, 31 Complete Games, 319 Innings Pitched, 137 Strikeouts, 1.125 WHIP and 170 ERA+. He led the league in Ks despite striking out less than 4 batters per game, quite a different world than we live in now. The Reds made it to the World Series but were swept by the Yankees. Walters won the pitching Triple Crown and the National League MVP Award that year in the days before the Cy Young Award. In fact three Reds finished in the top four of the MVP voting that year. Johnny Mize of the Cardinals came in second, Reds pitcher Paul Derringer came in third, and Reds first baseman Frank McCormick came in fourth. Walters was the second of three consecutive Reds to win the MVP Award from 1938-1940. Ernie Lombardi won it in 1938 and Frank McCormick in 1940. Walters played the first four years of his major league career as a third baseman before switching to pitching in 1934. Walters led the Reds to the World Series again in 1940 and they beat the Tigers in seven games, with Walters becoming the first pitcher to hit a WS home run in 14 years. Like Mike Leake, he was sometimes used as a pinch hitter. Walters is a member of the Reds Hall of Fame and has received extensive consideration for the National Baseball Hall of Fame by the Veterans Committee. He was a six time All Star 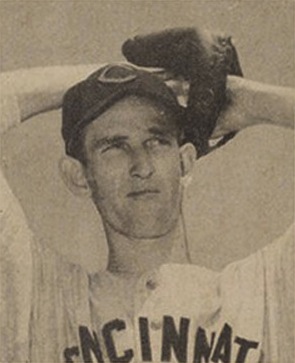 In 1947 Ewell Blackwell led the league with 22 Wins and 193 Strikeouts. He put up a 2.47 ERA across 273 innings. He finished second in the MVP balloting behind Bob Elliott of the Boston Braves. During that stellar 1947 year he threw a no-hitter against the Braves and in his next game took a no-hitter into the 9th inning before it was broken up, nearly matching teammate Johnny Vandermeer’s amazing feat of back-to-back no-hitters. Blackwell’s sidearm delivery gave him the nickname “The Whip”. He was the Randy Johnson of his day. He was tall (6’6″), skinny and threw very hard from an unusual sidearm angle that intimidated hitters.Ã‚Â He made six consecutive All Star teams from 1946-1951. Blackwell is an inducteeÃ‚Â of the Reds Hall of Fame. 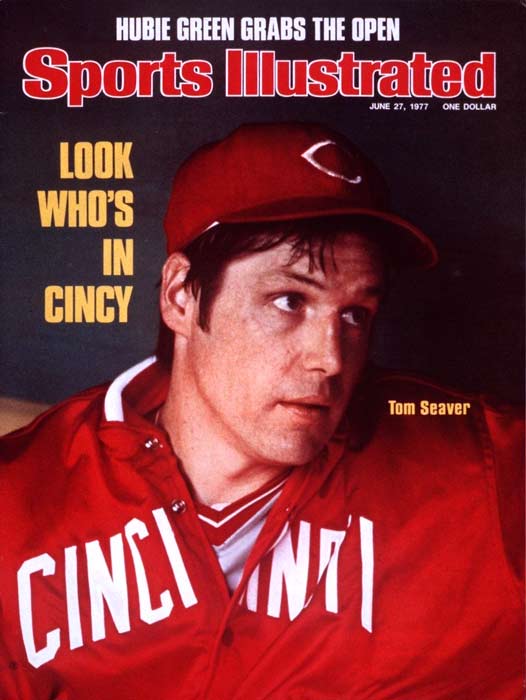 In 1977 the Reds traded for Tom Seaver mid-season and he went on to pitch 165 innings for the Reds with a fantastic 168 ERA+. Those innings came after he had already pitched 96 innings for the Mets that year. His combined ERA+ for the season was “only” 149. In 1977 Seaver was still in the prime of his Hall of Fame career. He made 12 All Star teams. He won the NL Rookie of the Year Award with the Mets in 1967 and also won three Cy Young Awards as a Met. He threw his only no-hitter in 1978 with the Reds. Ã‚Â He is the only pitcher to ever strike out 10 consecutive batters. His 3640 strikeouts rank him third on the all time list. 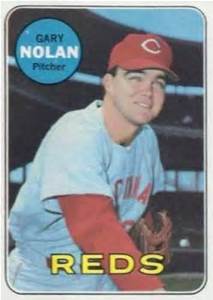 In 1972 Gary Nolan had the best season of his injury-marred career. He went 15-5 with a 1.99 ERA and 162 ERA+. He tied with Reds reliever Clay Carrol for 5th in the Cy Young balloting and made his only All Star team. The Reds lost to the Athletics in the World Series that year. Nolan missed most of the next two seasons before returning for the 1975 campaign and helped lead the Reds to back-to-back world championships. Nolan broke into the majors when he was only 18 years old and struck out Willie Mays four times in one game as a rookie. He is in the Reds Hall of Fame. 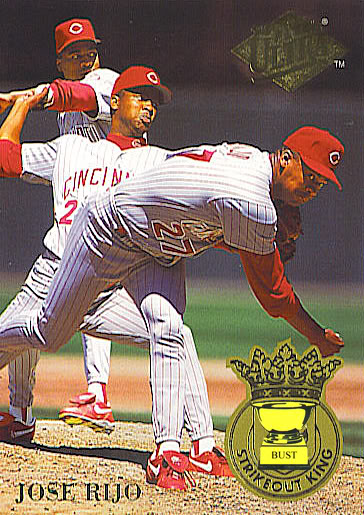 Jose Rijo delivered an amazing 1993 season. His 162 ERA+ was helped by his 14-9 record and 2.48 ERA. He led the league by striking out 227 batters in 257 innings. He finished 5th in the Cy Young voting behind Greg Maddux. John Burkett also finished ahead of Rijo even though he hadÃ‚Â a mediocre 107 ERA+. Rijo did not make the All Star team in 1993 but did the following year and it was the only All Star selectionÃ‚Â of his career. How does a guy who had a 138 ERA+ and a 2.83 ERA across 10 seasons with the Reds and two top-5 Cy Young seasonsÃ‚Â only make one All Star team? Rijo won two of the four games in the 1990 World Series sweep of the Athletics, including a 2-hitter in the finale to garner WS MVP honors. Like Nolan, Rijo began his major league career at the young age of 18, and in fact was the youngest player in baseball at the time. Due to multiple arm surgeries Rijo missed five seasons and returned to pitch in 2001 after having already received votes for the Hall of Fame. Rijo was inducted into the Reds Hall of Fame in 2005. 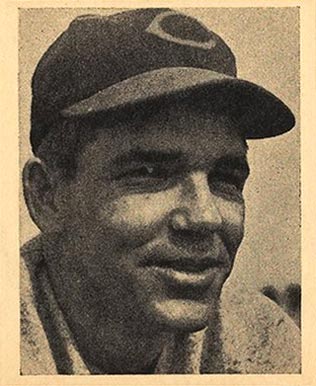 Elmer Riddle went 19-4 with a 2.24 ERA during the 1941 season just before the United States entered World War II. He led the league in ERA and ERA+ that year. He later led the league in Wins in 1943 with 21. The bulk of his career was played during the war. He came in 5th in MVP balloting in 1941 behind winner Dolph Camilli, a slugging first baseman for the Brooklyn Dodgers. He was a member of the 1940 Reds world championship club. He made one All Star team in 1948 with the Pirates. His brother Johnny was a major league catcher whose career spanned 19 years but he only played 98 total games in that span. Elmer is the only pitcher on this list of great Reds ERA+ seasons who is not in the Reds Hall of Fame (other than Cueto, who certainly will be inducted some day).

So to get back to Johnny Cueto’s place on the list of the greatest seasons in Reds pitching history, it looks like Cueto has two of the top 10 campaigns. The 2011 season was only 156 innings, so it technically might not count if you insist on meeting the one inning per game played by the team threshold. Seaver’s great Reds season also comes with an asterisk because he pitched less effectively for the Mets that same year. Riddle’s marquee campaign came during the war and Luquee’s came at the very transition from dead ball era to live ball era. So it is fair to rank Cueto’s 2014 season as one of the top 5 seasons by a Reds pitcher ever.

Cueto’s career ERA+ of 123 is the 3rd best by any Red behind Jose Rijo’s 138 and Bucky Walters’ 124 if you consider only their time as Reds. But if you consider their entire careers they fall behind Cueto. By those standards it makes some sense to declare that Cueto has had a better career as a Red than any other pitcher in history thus far. If Cueto continues to pitch as well as he has the last four years he could pull away from the pack considerably. He is very likely to cement his place in the record book as the most effective pitcher in Reds history before he leaves the Reds as a free agent after this 2015 season. Others have pitched longer for the Reds and won more games, and someÃ‚Â have had stellar careers before or after pitching inÃ‚Â Cincinnati, but only Rijo and WaltersÃ‚Â have out-shined the rest of the league to the same degree thatÃ‚Â Johnny Cueto has been able to do as a Red.