One of the first pieces of news we received this month was Bryan Price definitively saying Zack Cozart is the RedsÃ¢â‚¬â„¢ starting shortstop. As C. TrentÃ¢â‚¬â„¢s article explains, Cozart knew he had an abysmal year at the plate and while looking for flaws in his mechanics, found his hands were too far forward, throwing off his timing and lengthening his swing.

ItÃ¢â‚¬â„¢s a small wonder Cozart was able to generate 1.2 WAR last year on his defense aloneÃ¢â‚¬â€he flirted with the Mendoza Line early and late in the 2014 season and his wRC+ of 56 was good for dead last in all of baseball among qualified hitters. ThatÃ¢â‚¬â„¢s getting bupkis from the eighth spot in the batting order, which on most days was followed by a similarly non-contributing hitter in the nine hole. I say most days because Mike Leake (in 68 at-bats, mind you) out-slugged Cozart to the tune of .338 to .300 and managed a wRC+ of 40Ã¢â‚¬â€just 16 runs less than the starting shortstop.

So, his mechanics were probably a little off. And in the midst of a lot of conversations about whether Votto and Bruce can return to their past hitting prowess, Cozart finds himself on a similar precipice and likely has more at stake. Even with his exceptional glovework, hitting as this clip isnÃ¢â‚¬â„¢t going to allow him to keep a starting gig, especially in the National League. Offensively, he has never been more than below-average in the majors, thus projecting his 2015 is a question of whether he can get back to hitting 25+ doubles and 10+ homers per season or not. IÃ¢â‚¬â„¢m in very close agreement with Jason LindenÃ¢â‚¬â„¢s projectionÃ¢â‚¬â€heÃ¢â‚¬â„¢ll be better, but not quite 2012-2013 better:

One big caveat with this line is regarding the number of games played. CozartÃ¢â‚¬â„¢s the starting shortstop and incumbent, thus heÃ¢â‚¬â„¢ll surely get most of the first-half workload without much pressure. My projection assumes heÃ¢â‚¬â„¢ll be the starter for most of the season, getting a few breaks when heÃ¢â‚¬â„¢s really slumping. What it also assumes is that neither Kristopher Negron nor Eugenio Suarez do enough to force themselves into consideration.

Cozart should be able to raise his average from last year with just a little more luck. His BABIP in 2014 was a rough .255 even while whiffing on just 7.8% of pitches in the strike zoneÃ¢â‚¬â€the lowest rate of his career. May and June were his most productive months of the season, with his BABIP and counting stats rising with the rate he was hitting ground balls. 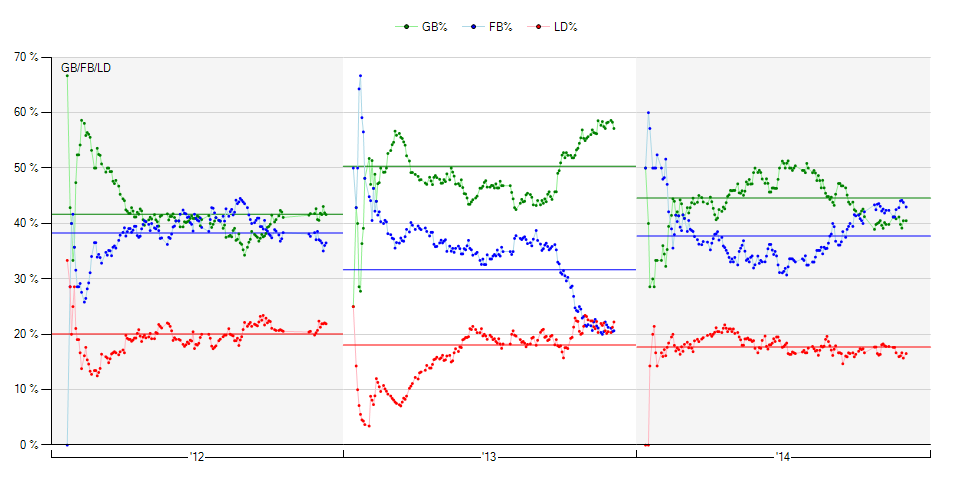 Noticing he was able to withstand fluctuations in previous years, we can surmise he wasnÃ¢â‚¬â„¢t hitting fly balls with the same authority in 2014. Lo and behold, CozartÃ¢â‚¬â„¢s average batted ball distance (on home runs and fly balls) was the lowest of his career at 257.2 feet. That was only a slight decrease from 2013Ã¢â‚¬â„¢s mark of 259.3 feet, but way down from his average of 271.8 feet in 2012. As he approaches 30 (which heÃ¢â‚¬â„¢ll turn in August), the power of three seasons ago probably wonÃ¢â‚¬â„¢t return. If you compare his 2013 and 2014 spray charts, youÃ¢â‚¬â„¢ll see he pulled the ball more regularly in 2013, offsetting some of his reduced overall power.

The key to a bounce back from Zack Cozart lies in effectively adjusting his swing as detailed in the aforementioned article. It stands to reason that if he can keep his hands back and thus tighten his swing, heÃ¢â‚¬â„¢ll be able to get around on more fastballs leading to more solid contact and extra base hits. Double-digit home runs will probably be a rarity for Cozart from here forward, but itÃ¢â‚¬â„¢s not unrealistic to hope for over twenty doubles, a couple triples, and a much-improved OPS. Then, we could all just relax and enjoy his Gold Glove-caliber defense.