For people on the wrong end of their 20s like myself, the fact that Jay Bruce is entering his eighth season in the majors puts a whole new meaning to the idiom Ã¢â‚¬Å“time flies.Ã¢â‚¬Â

LetÃ¢â‚¬â„¢s take a step back for a second and reevaluate BruceÃ¢â‚¬â„¢s path to the big leagues. The Beaumont, Texas, native was the 12th pick in an absolutely loaded first round of 2005 draft. Justin Upton, Alex Gordon, Ryan Zimmerman, Ryan Braun, Troy Tulowitzki and Andrew McCutchen were selected prior to Bruce. Cliff Pennington, Jacoby Ellsbury, Matt Garza and Colby Rasmus were taken after Bruce. Ricky Romero, Mike Pelfrey and Cameron Maybin were also first-round picks in 2005. That’s some serious talent.

After signing on June 10, 2005, Bruce annihilatedÃ‚Â mostlyÃ‚Â everything in sight during his stint in the minors, slashing .308/.366/.551 in over 1,500 minor league plate appearances. Named Baseball AmericaÃ¢â‚¬â„¢s Minor League Player of the Year in 2007 as well as the minorsÃ¢â‚¬â„¢ No. 1 prospect prior to the 2008 season by both Baseball America and Baseball Prospectus, Bruce reached Triple-A by his age-20 season.

The 6-3, 215-pound lefty outfielder made his major-league debut on May 27, 2008, and as the kids would say, Ã¢â‚¬Å“crushed itÃ¢â‚¬Â in the interim, smacking 11 hits in his first 19 at-bats. BruceÃ¢â‚¬â„¢s first home run was a walk-off shot in the bottom of the 10th inning vs. the Atlanta Braves four days after his debut, a round-tripper that overshadowed Ken Griffey Jr.Ã¢â‚¬â„¢s 599th home run earlier in the contest.

We know that in 2014, Bruce missed only two weeks after undergoing surgery for a torn meniscus in his left knee on May 6. He played through post-surgery issues with the knee and suffered through a lost season,Ã‚Â finishing with career-lows in batting average, home runs, isolated power, on-base percentage, slugging percentage and weighted runs created plus. The following quote from the above linked piece by MLB.comÃ¢â‚¬â„¢s Mark Sheldon is telling:

“It’s been miserable. It’s honestly been the most embarrassing year of my life,” Bruce said late last August. “But I know this isn’t me. It’s definitely humbling, not that I needed to be more humbled by anything. I feel like I’m pretty self-aware and have some humility.

“It’s just one of those things. You have to find a way to take some positive out of it to get better. I think this is going to make me better.”

Late last month, Reds manager Bryan Price expressed regret about how the team handled BruceÃ¢â‚¬â„¢s rehab. [Somewhere, Mat Latos nods]. Now, Bruce claims he is 100 percent and refused to blame his woeful 2014 campaign on his kneeÃ‚Â injury, which, while noble, is a bit ridiculous.

To arrive at my projections — which, of course, assume a healthy 2015 for Bruce — I removed the 2008 (Bruce wasnÃ¢â‚¬â„¢t called up until late May), 2009 (Bruce missed two months with a broken wrist) and 2014 (self-explanatory at this point) seasons and factored in BruceÃ¢â‚¬â„¢s 2009-13 campaigns. I then averaged out those four seasons — Bruce doesnÃ¢â‚¬â„¢t turn 28 until April 3, so thereÃ¢â‚¬â„¢s no reason to believe heÃ¢â‚¬â„¢s in decline or susceptible to major age-related regression — and arrivedÃ‚Â at the above numbers, which admittedly came out on the optimistic side of things. However, I split the difference on slugging percentage and on-base plus slugging percentage with my numbers and Jason LindenÃ¢â‚¬â„¢s projections because I felt my calculationsÃ‚Â in those two categories were a bit too optimistic.

With a handy assist from fromÃ‚Â Steve Mancuso’s Big Reds Preview, one can pinpoint a pair ofÃ‚Â disturbing trends with Bruce’s numbers: a strikeout rate that has escalated in each of the past five seasons and a walk rate that has decreased over the past four years.

Take a look at the following isolated power heat maps for Bruce. The first map is from the beginning of Bruce’sÃ‚Â major-league career through 2013. The second is from 2014. 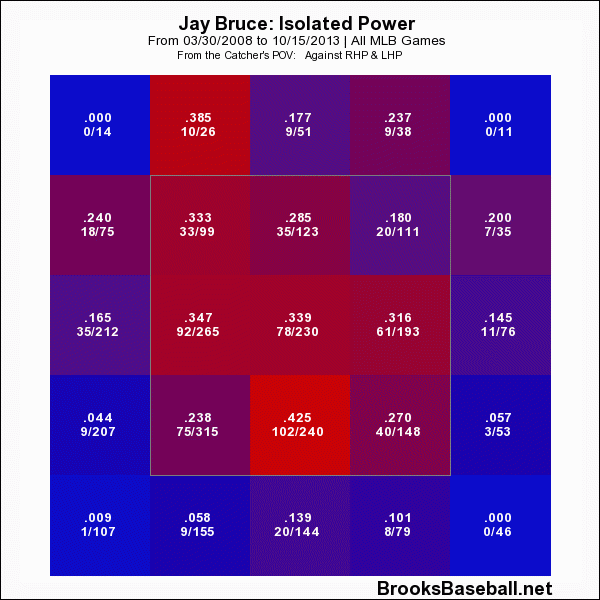 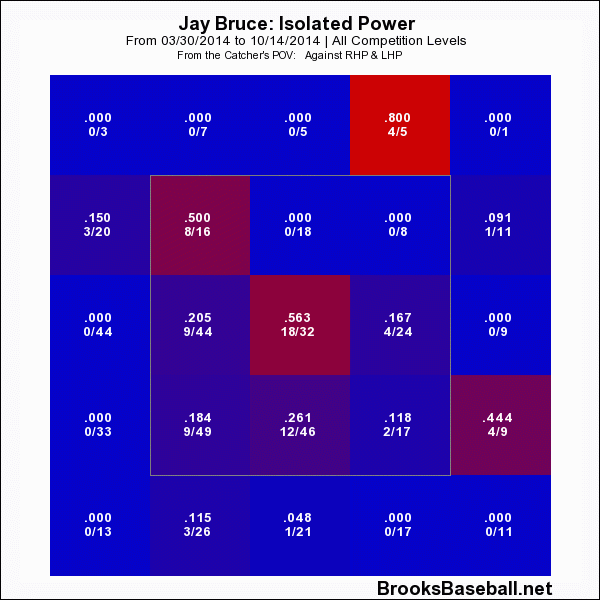 Through 2013, Bruce wallopedÃ‚Â just about anything in the strike zone. Last season…not so much. ItÃ¢â‚¬â„¢s pretty hard to argue that BruceÃ¢â‚¬â„¢s 2014 decline was anything but injury-related. As Sarris noted, the injury to BruceÃ¢â‚¬â„¢s back leg — which would’ve been his injured left leg while standing at the plate — robbed BruceÃ‚Â of his power and resulted in him pounding the ball into the ground like he was a souped-up version of David Eckstein.

So, aside from the return of good health, I believe stable contact peripherals, a wake-up call provided from the doldrums of 2014 and a proper perspective of the defensive shifts employed against him will vault Bruce back into his usual atmosphere of being one of the National LeagueÃ¢â‚¬â„¢s top power threats in 2015.