Very few major leaguers ever have had the breakout season Devin Mesoraco did in 2014. That’s something many of us understood while we watched him last season, but the historical context Jeff Sullivan uncovered over at Fangraphs back in August really illustrated just how much of a jump he had made from 2013 (though his wRC+ would fall to 147 by year’s end and out of such historic company).

The realization of his lofty potential led to a lot of digital ink being spilled to document and explain his ascension to elite company. A combination of better patience at the plate, swinging hard, and standing closer to the plate while leaning over the inside corner led to him making more solid contact. Though he whiffed on a higher percentage of swings on pitches in the strike zone, the increase was marginal, going up to 14.8% whiff/swing from his 2013 mark of 13.6% (while seeing 110 more pitches in the zone last season).

Mesoraco blossomed into both a legitimate middle-of-the-order threat and a bona fide pull hitter last year. Check out his heat maps on line drives and fly balls for 2013 and 2014 (followed by one just mapping line drives):

Looking at left field on these maps, the picture of Mesoraco’s story becomes clearer, especially in terms of BABIP. You can practically see the left fielder standing in the negative space on the 2014 maps, and how often Mesoraco was walloping fly balls over his head or line drives in front of him last season. Devin’s adjusted approach at the plate made him more productive than anyone expected, allowing him to pulverize pitches up in the zone while still being able to get his hands inside of pitches on the inner third

In terms of projecting his 2015, though, his pull-heavy tendencies makes me a bit cynical. For one, a lot of defenses are going to start employing a more pronounced shift when he’s at the plate. Having the infield play him dead pull will take away a few more groundball base hits (and thus a few points off his batting average) as well as a few line drives to shallow left. Bringing the center fielder just a couple yards closer to the left fielder could also rob a few gap shots from Mesoraco as well: 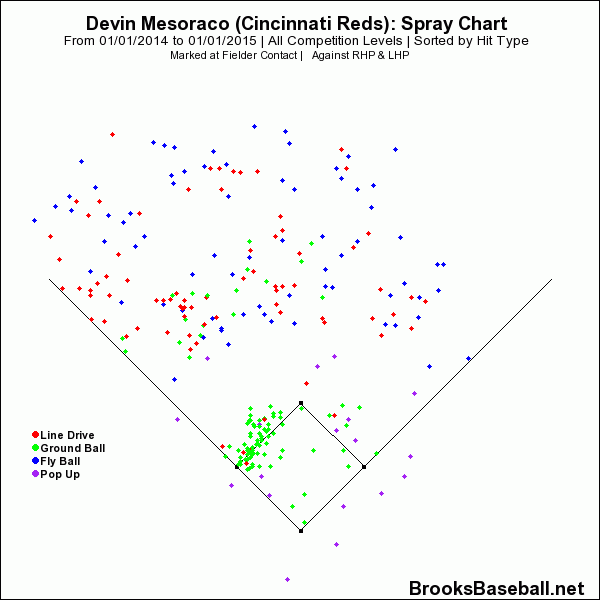 The thing is, shifting against a pull hitter doesn’t often change that hitter’s mind or approach. Add in pitchers throwing more off-speed stuff to try and get Mesoraco to roll over on it and the negative effect may be more drastic than just a few points of batting average. It’s tough to slap the ball the other way when it goes against a hitter’s mechanics and when the pitcher is doing everything to prevent that from happening. It may be even tougher because Mesoraco’s new hitting approach made him so successful as a pull-hitter the adjustments to hit the ball against the shift may make his swing less fluid. With this in mind, here are my projections for Devin Mesoraco in 2015:

He’s going to take a step back in my mind, but not a drastic one and the power will still be there all year long. A drop of .030 points in on-base percentage is a little steepÃ¢â‚¬â€I hope I’m incorrectly pessimistic about him adding more walks than his track record suggests (he did boost his walk rate by 2.5% last season over 2013). Honestly, I hope I’m wrong about the batting average, tooÃ¢â‚¬â€it would solve a lot of problems if Mesoraco could turn in another campaign of .270 or better, thus allowing him to hit higher in the batting order if Votto or Bruce aren’t healthy or back to hitting well. He very well could with luckÃ¢â‚¬â€that stat line above just needs 12 more balls to drop in for hits to match his 2014 batting averageÃ¢â‚¬â€but more likely it will take him adjusting to the adjustments his opponents make. And for a 26 year-old playing the game at a high level at the toughest position, that’s certainly in the realm of possibility both this year and in his bright future ahead.