We continue our series of preseason projections today with a player many are expecting big things from in 2015. Todd Frazier was one of the few bright spots from last season as we all know and he enters this season with heightened expectations, primarily that heÃ¢â‚¬â„¢ll provide some consistency to a lineup is peppered with uncertainties.

Steve covered a lot about what led to FrazierÃ¢â‚¬â„¢s breakout 2014 campaign in his Big Reds Preview and Jason touched on what heÃ¢â‚¬â„¢s projecting for the RedsÃ¢â‚¬â„¢ offense, Frazier included. My predictions for FrazierÃ¢â‚¬â„¢s performance are rooted in the projection systems already out there, his performance in hitting the ball to all fields, and a healthy dash of optimism.

LetÃ¢â‚¬â„¢s get right down to the crux of the matter; hereÃ¢â‚¬â„¢s the line IÃ¢â‚¬â„¢m projecting for Todd Frazier in 2015:

IÃ¢â‚¬â„¢m expecting Frazier to repeat his productivity from last year, setting a career-high in extra base hits (though not by much) and taking a slight step back in just getting on base. That is to say, I see him becoming a pretty typical cleanup hitter with less gaudy power numbers. As many have noted before, Frazier is at an age when regression, if it does happen this year, shouldn’t be extreme. Pitchers and staffs will be adjusting to what made him one of the more productive power hitters in the National League last year, but Frazier now has the experience and comfort in the big leagues to prevent being overmatched as he often seemed in 2013.

We know Todd to be a pretty aggressive hitter and a guy who goes up to the plate looking to bludgeon any ball the pitcher rashly leaves in the strike zone. In 2014, he was above league average in his aggressiveness on fastballs and off-speed pitches and improved his plate discipline on those pitches as well. Breaking balls, particularly sliders, were a bit more troublesomeÃ¢â‚¬â€partially due to right-handers pitching him low and away (and lefties coming low and inside) and partially due to him taking those pitches for strikes when he’s looking for a fastball. 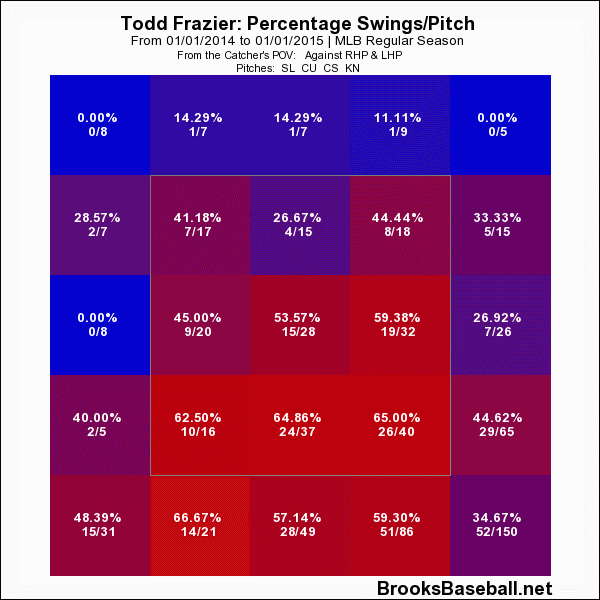 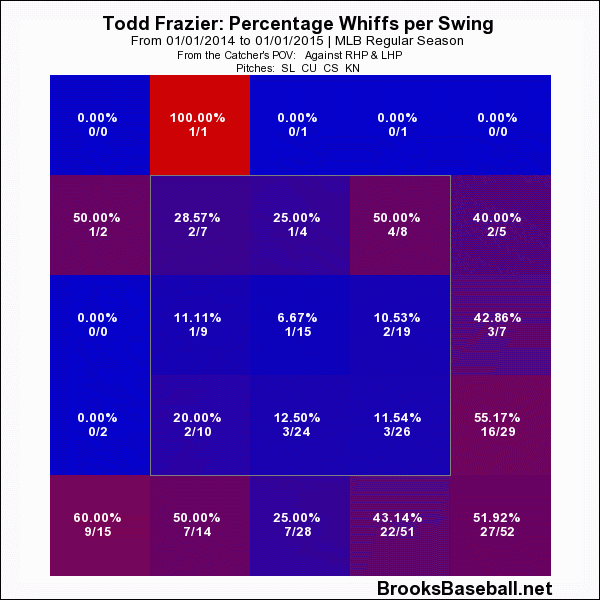 Notice the rates on breaking pitches in the lower third and below. If the pitcher can get it out of the zone, Frazier will chase it, but he doesn’t miss it that often unless it’s also off the plate as well. Those pitches induced weak contact from him when the ball ended up in play (resulting in a .188 AVG on all breaking balls below the knees) but if the pitcher can’t get the breaking ball to dive out of the zone, this happens: 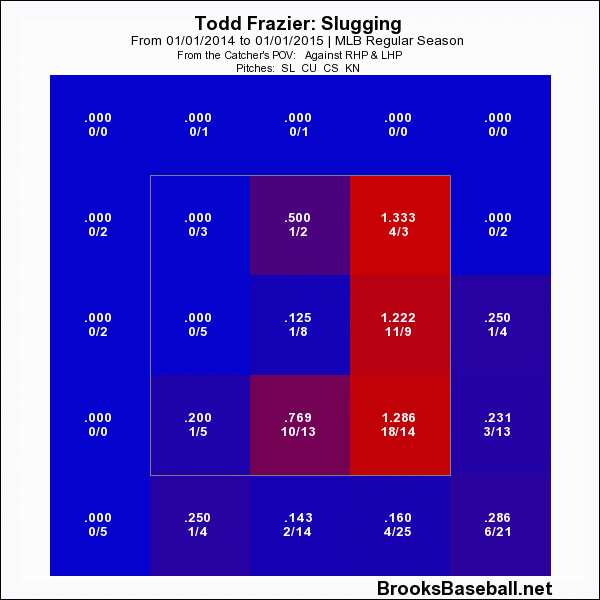 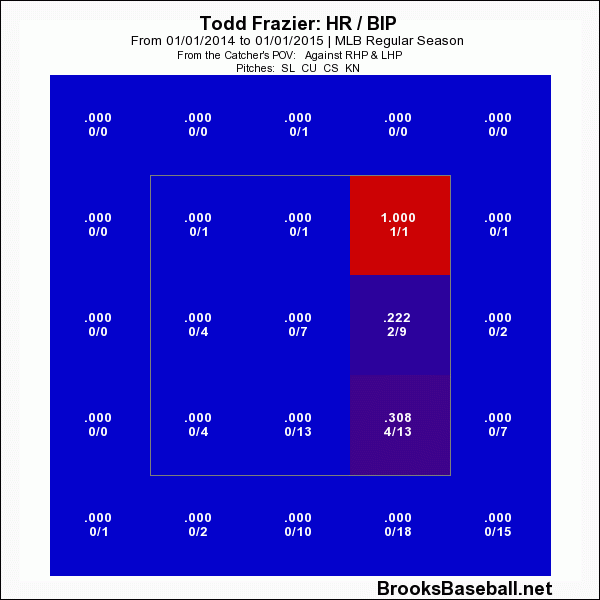 The kid will make you pay for leaving that breaking pitch in the zone and on the outer third. I imagine opposing pitchers aren’t going to change their gameplan much just because he hit seven of his homers on breaking balls. But compared to his 2013, it was an improvement: 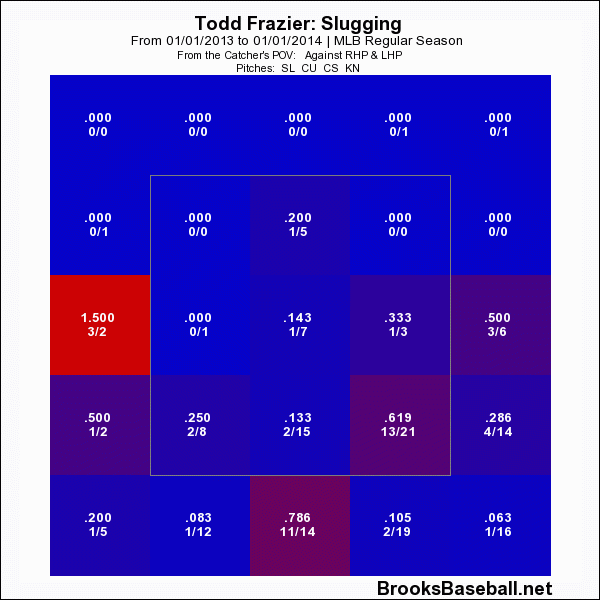 Todd has two good present-day hitting comparables in Josh Donaldson and Adam Jones, both of whom had 29 home runs as well last year, have similar aggressive approaches at the plate (Jones being the most extreme of the three in that regard) and face similar strategies from opposing pitchers. During the 2014 season, Frazier saw 61% fastballs to off-speed and breaking pitches while Donalson saw 60% and Jones 58%. Of the three, Frazier hit the highest percentage of his home runs on non-fastball pitches (42% to Donaldson’s 24% and Jones’ 38%). That might mean pitchers just hung a few more when facing Frazier, that might because of park effects, or that might mean Frazier is hitting breaking balls harder than the other two.

As you can see, Donaldson and Jones are a little better at spraying breaking balls all over the field, not necessarily knocking them over the wall, and Jones seems to hit them father on average than the other two. Frazier, though, clearly had success last year when he went the other way with breaking balls, as all seven of his homers on such pitches went to the opposite field.

What I took away from these charts is that Todd will probably see more breaking pitches on the lower and outer edges of the strike zone this coming season in an effort to play his aggressiveness against him. One of two things will necessarily happenÃ¢â‚¬â€Frazier will either attempt to become a more patient hitter (his overall swing % has decreased each of the last two seasons) and wait for most fastballs or mistakes in the zone or he’ll try to get better contact on borderline pitches, sacrificing some power for getting the ball in play. My inclination, based on where he’ll likely hit in the lineup and the expectation for him to be a major run-producer for the offense, is that he’ll take the latter route. Thus, he’ll probably make more contact and walk less while trading some of his moonshots for gappers, hence the dips in AVG, OBP, and home runs, with increases in doubles and SLG.

I agree with most projections in the sense that Todd Frazier will see some slight BABIP-generated regression, but I see it not at the expense of his offensive productivity on the whole. I might be looking at this with some seriously rose-colored glasses, but even the most pessimistic projections for Frazier predict another steady year at the plate. With all the other wild cards on this roster, I think that should do just fine.