[This is the second of two excerpts from my eBook, The Big Reds Preview. The book covers 30 Reds players over 142 pages. If you want to read previews like this for all those players, you can purchase it for $12.95.]

That was certainly the national narrative about the Dominican pitcher. Whether it was taking note of his complete games, 8-inning starts, holding other teams to 2 or fewer runs or his strikeout rate, 2014 was the season that skeptical pundits finally recognized that awesome things do come in small packages. Cueto was dreaded andÃ‚Â dreaded.

Absolutely. He became a better pitcher.

For starters, Johnny Cueto retooled his pitch portfolio, reducing the use of his slider and change-up while emphasizing his cutter. 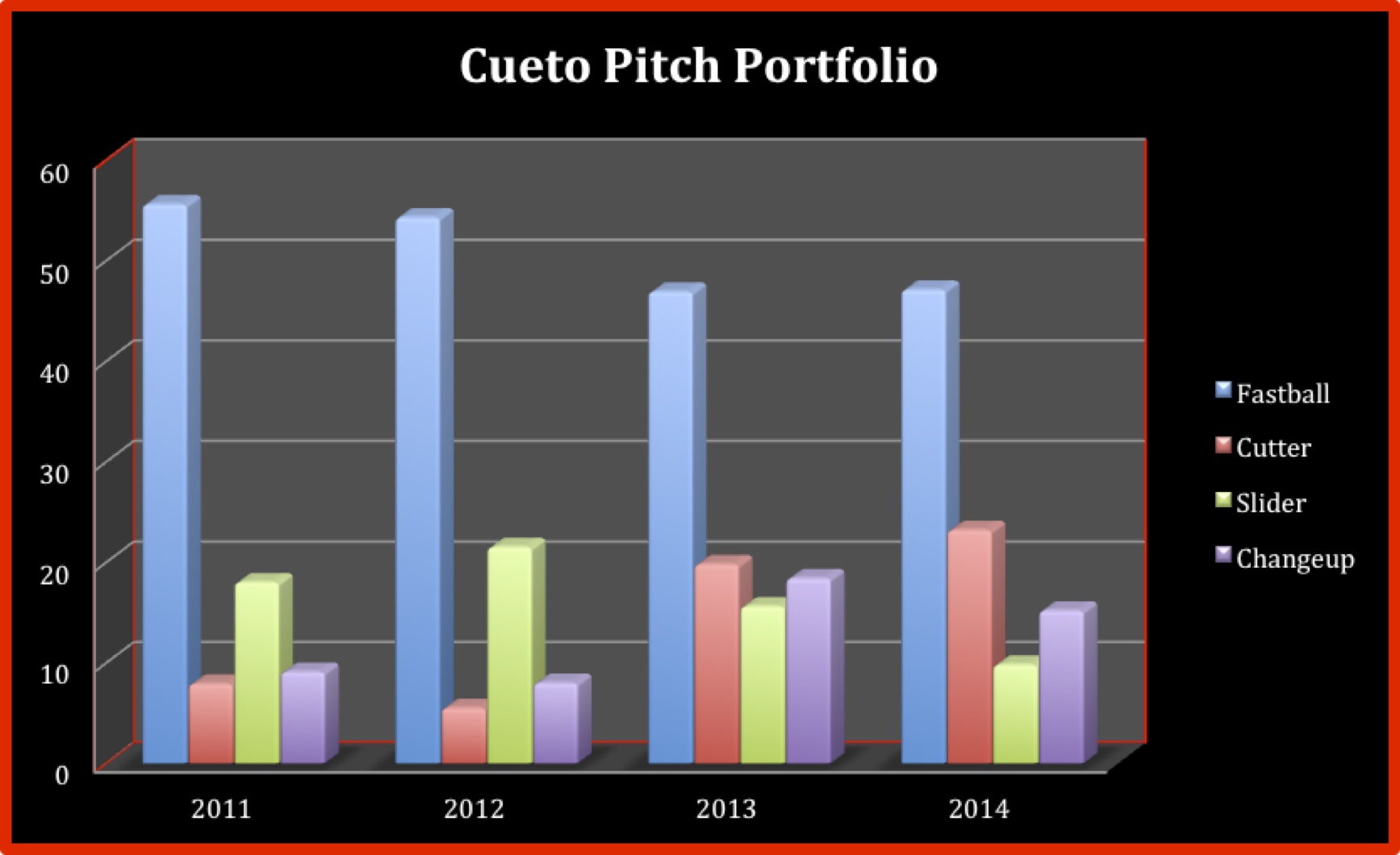 According to Bryan Price, Cueto’s cutter allowed the pitcher to reduce his reliance on the fastball to get hitters, which made him more unpredictable and kept batters guessing.

Price explained: Ã¢â‚¬Å“It is his acute location, not making mistakes in the middle of the plate, and he is pitching his best style of game Ã¢â‚¬â€ the heavy sinker-cutter combination and he has a swing-and-a-miss change-up, a strikeout pitch.Ã‚Â He makes all those pitches at any time and doesnÃ¢â‚¬â„¢t have to be predictable with a fastball. He throws them all ahead in the count or behind in the count.Ã¢â‚¬Â

Cueto obviously benefited from the Reds being an above average defensive team. Thanks to Billy Hamilton and Zack Cozart, the Reds enjoyed their best team-defense score since before their divisional championship in 2010. While the team may not repeat that performance in 2015 Ã¢â‚¬â€œ even taking into account Todd FrazierÃ¢â‚¬â„¢s return to third base fulltime Ã¢â‚¬â€œ they will still be well above average in fielding.

And better defense doesn’t account for CuetoÃ¢â‚¬â„¢s surge in strikeouts where the batter stood there and took strike three. Ã¢â‚¬Å“Strikeouts lookingÃ¢â‚¬Â is a positive metric. In the same sense that a strikeout is the best kind of out for a pitcher because the batter canÃ¢â‚¬â„¢t stumble into a hit out of luck, a strikeout looking further takes the risk out of play for the pitcher. The major league called-strikeout average in 2014 was 24.5 percent. Johnny CuetoÃ¢â‚¬â„¢s was 30.6 percent, a gigantic increase for the Reds pitcher. Cueto was doing something different. 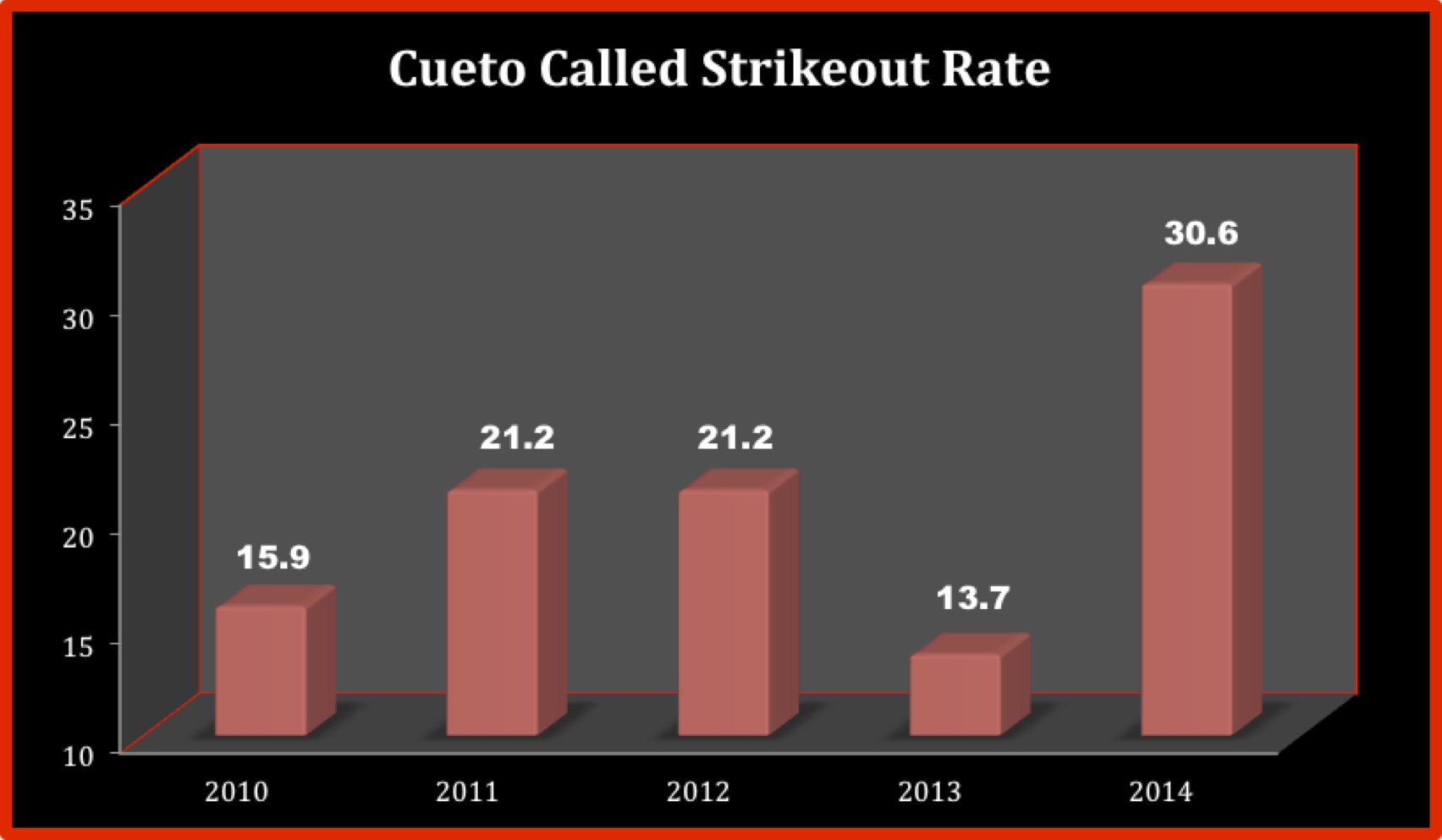 Jeff Sullivan of FanGraphs explained it in detail: Ã¢â‚¬Å“The changeup is still there Ã¢â‚¬â€ itÃ¢â‚¬â„¢s still good, and itÃ¢â‚¬â„¢s still a swing-and-miss weapon. But, sinkers and cutters used to account for about a fifth of CuetoÃ¢â‚¬â„¢s strikeouts. This season, theyÃ¢â‚¬â„¢re more than half. HeÃ¢â‚¬â„¢s changed his two-strike approach to righties and lefties.Ã‚Â Seen less often is CuetoÃ¢â‚¬â„¢s slider. Previously, he liked to throw it low and away to righties, and low and in to lefties. These are common techniques, but in 2014 Cueto hasnÃ¢â‚¬â„¢t tried to get many righties to chase, and lefties havenÃ¢â‚¬â„¢t really seen that slider at all.Ã¢â‚¬Â

The best indicator of CuetoÃ¢â‚¬â„¢s breakthrough 2014 season was his relative strikeout and walk rates.Ã‚Â The statistic K-BB% (simply subtracting the walk-rate from the strikeout-rate) has been proven one of the most reliable measures of quality pitching. It’s a strong predictor of both short-term and long-term success.Ã‚Â The list of league leaders in K-BB% reads like a whoÃ¢â‚¬â„¢s who of major league starters: Kershaw, Sale, Price, Strasburg, Kluber, Hernandez, Scherzer, Bumgarner and Greinke.

The major league K-BB% average for starting pitchers was 12.3 percent. Johnny CuetoÃ¢â‚¬â„¢s number, having been average or below in the past, soared to 18.4 percent, fourteenthÃ‚Â best among all starting pitchers. 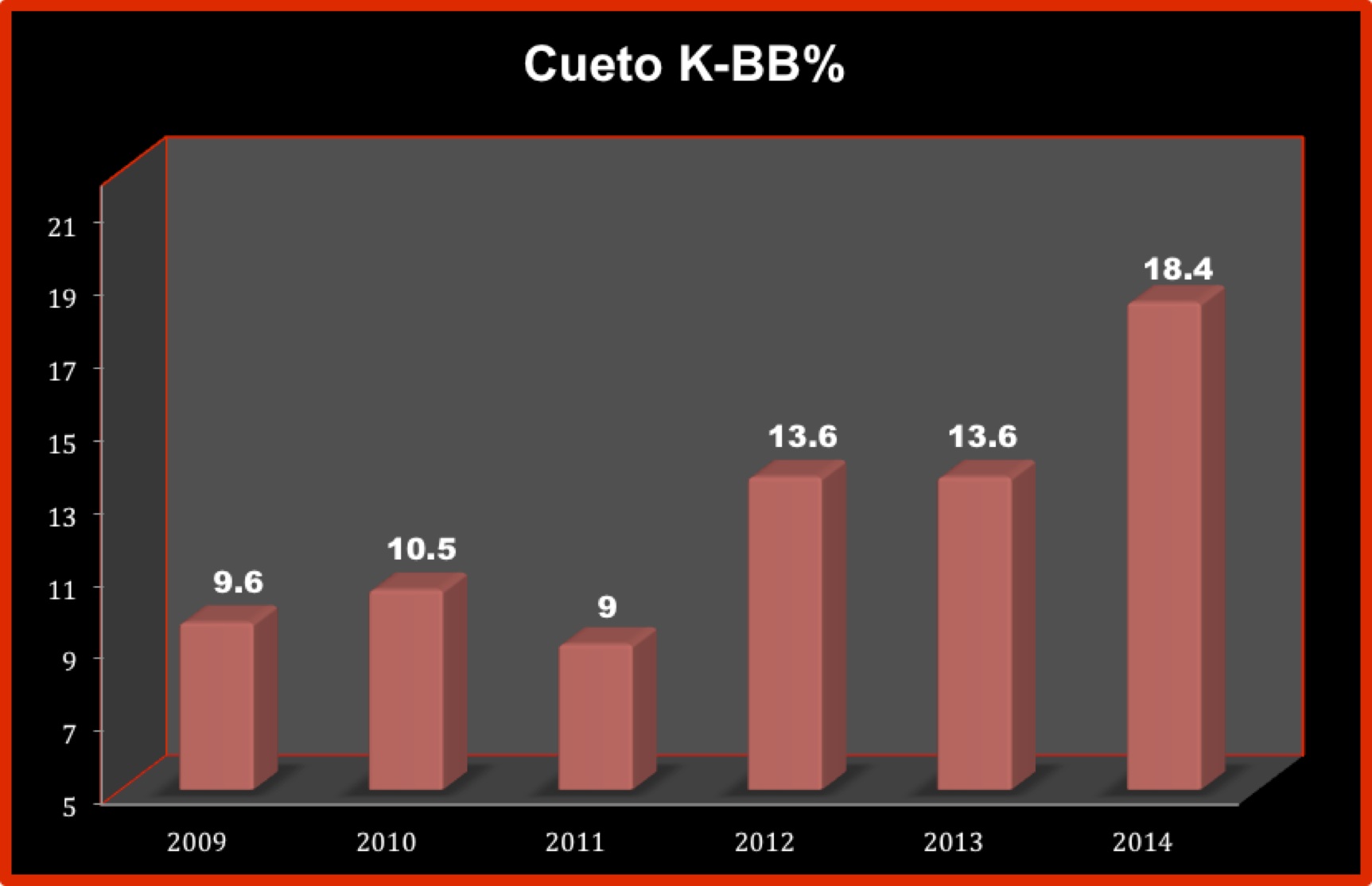 In 2014, Johnny Cueto conquered one if his greatest weaknesses Ã¢â‚¬â€œ pitch inefficiency. His career pitch per plate appearance (P/PA) of 3.89 was well above league average of 3.82. In 2014, Cueto threw fewer waste pitches, reducing his P/PA to 3.80. This was an all-the-more-remarkable feat because Cueto was at the same time striking out more hitters. His efficiency allowed Cueto to pitch deeper into games, reducing reliance on the middle of the bullpen. In 23 of his 34 starts, Cueto pitched at least 7 innings. In 15 of those starts, he pitched at least 8 innings.

Can Johnny Cueto Sustain the Gains in 2015?

Much of what Johnny Cueto did in 2014 to improve Ã¢â‚¬â€œ pitch selection, efficiency, etc. Ã¢â‚¬â€œ can be repeated. Given that his tremendous bottomÃ‚Â line numbers, like ERA, are backed up by solid underlying metrics (fastball velocity, strikeout-rate, walk-rate etc.), thereÃ¢â‚¬â„¢s no reason to expect large regression.

Two factors do point to modest backsliding – his age and the second half of 2014.

Johnny Cueto will be 29 on Opening Day. ThatÃ¢â‚¬â„¢s not an age where youÃ¢â‚¬â„¢d expect a collapse, but it also wouldnÃ¢â‚¬â„¢t be a surprise to see him decline a bit.Ã‚Â Here are CuetoÃ¢â‚¬â„¢s innings totals from the past five years: 185.2, 155.0, 217.0, 60.2, and 243.2. In 2012, he got hurt in the NLDS. Sure, you could look at 2014 and expect him to pitch 240+ innings again. But a more realistic assessment would take an average and assume a trip to the DL somewhere along the way. 2014 was, after all, his only completely healthy season. When you factor that the risk of injury grows as a player ages and recovery time slows, expecting Cueto to pitch 244 innings again in the regular season is a stretch.Ã‚Â Maybe Cueto will only get to 200 IP instead of 240. That’s a 20 percent hit on his counting numbers (strikeouts, wins etc.) right there, although it wouldn’t affect his rate stats (ERA, FIP, K-BB%).

The second reason to expect that Cueto may not put up quite as good numbers in 2015 as he did in 2014 is how he performed in the second half of 2014. While Cueto largely sustained his tremendous performance throughout 2014, his second half wasnÃ¢â‚¬â„¢t quite as successful as the first. His K-BB% fell from 18.9 to 17.8, his line drive rate went up from 17.4% to 22%. His ground ball rate fell from 53 to 39%. Batters may have adjusted somewhat to his new pitch portfolio. And the numbers that pitchers canÃ¢â‚¬â„¢t control much (BABIP and Strand Rate) also regressed to the mean in the second half. If that’s the case, expect his rate stats to worsen a bit.

Bottom line: Expect Cueto to have another great season, although the odds are against a full repeat of his dominant 2014. For his counting numbers to hold up, heÃ¢â‚¬â„¢ll need to stay healthy. His rate stats will look more like they did in the second half of 2014 than the first half. Professional projections are estimating his ERA will be around 3.00. But another sub 3.00 ERA isn’t out of the question.