[This post is the first of two excerpts from my eBook, The Big Reds Preview. The book covers 30 Reds players over 142 pages. If you want to read previews like this for all those players, you can purchase it for $12.95. Tomorrow, I’ll discuss expectations for pitcher Johnny Cueto.]

No variable is more important for the Reds in 2015 than Joey VottoÃ¢â‚¬â„¢s health. Last season, the first baseman suffered fromÃ‚Â patella tendinosis Ã¢â‚¬â€œ a condition where the quadricep muscle at the front of the thigh, above the knee, is damaged due to overwork. His last game was July 5.

Fortunately for the Reds and Votto, the injury was muscular, not structural. In the past few seasons, other baseball players Ã¢â‚¬â€œ Edwin Encarnacion and Troy Tulowitzski are two examples Ã¢â‚¬â€œ have recovered fully, which is the norm.

No reasonable person should question Joey VottoÃ¢â‚¬â„¢s desire to play baseball or be the best player he can. HeÃ¢â‚¬â„¢s spoken often how important it is to him to play every day. He suited up for 161 games in 2011 and 162 games in 2013. Votto probably injured his muscle last season because of how hard he was training at the start of the year, working to build strength and durability in his left leg. Just as was the case in 2012 with his knee injury, Votto continued to play until the team ordered him to quit.

Impact of Injury on 2014 Season

Unlike his meniscus tear in 2012, which was due to specific trauma, tendinosis is a gradual injury. That makes it impossible to pinpoint — like a specific slide — when the condition became debilitating for the Reds first baseman.

Most people consider Joey VottoÃ¢â‚¬â„¢s MVP season of 2010 to be his gold standard. But Votto was having a Ã‚Â better season in 2012 prior to his injury. Votto wrecked his knee sliding into third base in San Francisco on June 29, 2012. He played a couple more weeks, including in the 2012 All-Star game. Votto then had two surgeries on his meniscus. He returned in September for a power-free drive to the postseason and NLDS.

But Votto hit better during the first three months of 2012 than he did in his 2010 MVP season. Here are the numbers to back that up:

Without question, by measures of batting average, walks, strikeouts, power and overall run creation, VottoÃ¢â‚¬â„¢s pre-injury 2012 was shaping up to be a substantially better hitting season than even his MVP year. ThatÃ¢â‚¬â„¢s a crucial understanding in making projections for 2015.

It’s well knownÃ‚Â that Joey Votto changed his hitting approach after his 2010 MVP season. Votto leveled his swing and decided to hit the ball to all parts of the field. He focused more on contact, patience and hitting line drives.

To form an accurate estimate of what one can expect from Votto in 2015, itÃ¢â‚¬â„¢s important to identify exactly when he evolved as a hitter. Conventional wisdom holds that Votto changed his approach after, and as a response to, his knee injury and surgeries. But that wrongly conflates those two issues.

The truth, backed up by analyzing fundamental metrics, is that Votto had begun to de-emphasize his free-swinging power and emphasize plate discipline well before his knee injury. A close look at the data reveals that Votto changed at least as early as the start of 2012.

For example, VottoÃ¢â‚¬â„¢s O-Swing Rate [the percent of pitches out of the strike zone that a player swings at] shows a sharp decline in 2012. ItÃ¢â‚¬â„¢s possible that Votto had already begun to change his approach in 2011. But itÃ¢â‚¬â„¢s simply beyond debate that when Votto was having his best year in 2012, before his injury, he had already changed his swing plane, was more selective and hitting to all parts of the field.

[For the purposes of looking at this issue, the data in the next two charts is based on his pre-injury at bats for 2012 and his April at bats in 2014.] 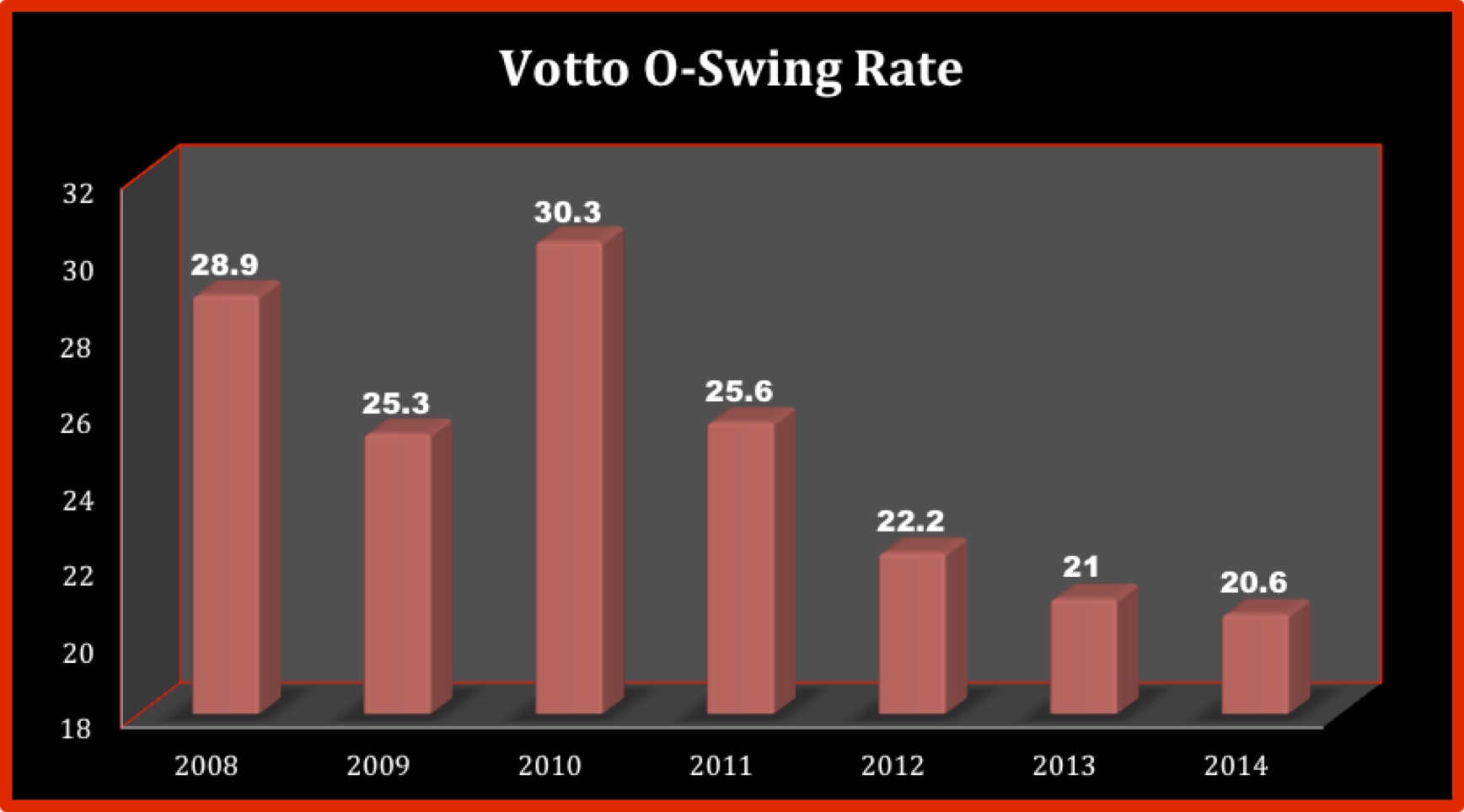 VottoÃ¢â‚¬â„¢s Z-Swing Rate [the percent of pitches inside the strike zone that a player swings at] shows a similar pattern Ã¢â‚¬â€œ a sharp decline from 2010 to 2011 and to an even lower level in 2012. 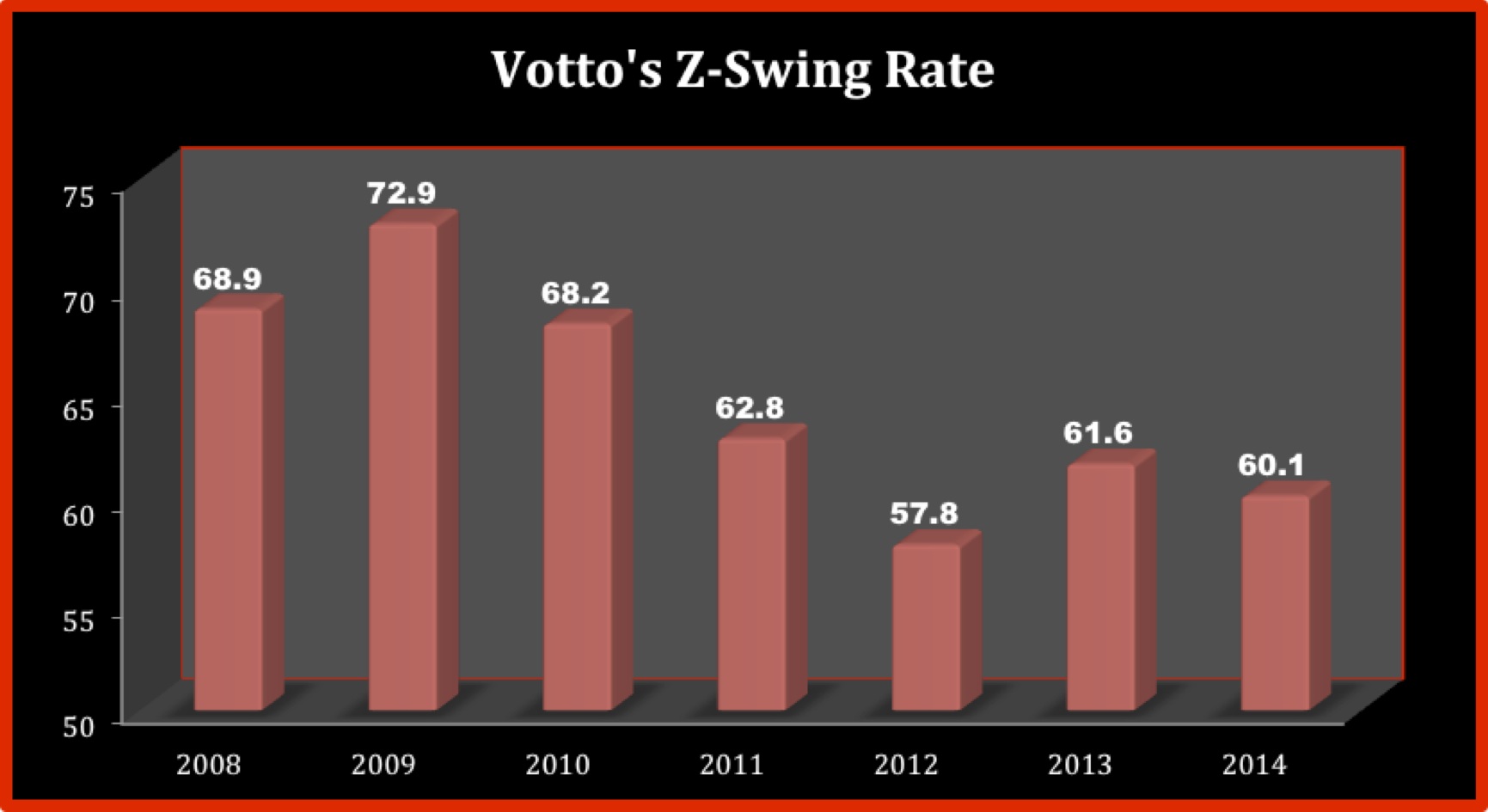 Conclusion: Joey Votto was already swinging at fewer pitches in 2012.

ItÃ¢â‚¬â„¢s clear from these two charts that VottoÃ¢â‚¬â„¢s more selective approach had begun by the start of 2012, if not before. Other data backs this up. His swinging-strike rate was lower from 2012 on and his contact rate was up.

Read this carefully: VottoÃ¢â‚¬â„¢s best power season (measured by ISO), his pre-injury 2012, was also his most selective at the plate.

Hitting to All Fields

Joey VottoÃ¢â‚¬â„¢s ability to hit to all fields helps him combat defensive shifts that have degraded the batting average of many left-handed pull hitters.Ã‚Â Here are his batted-ball spreads from 2012 and 2013: 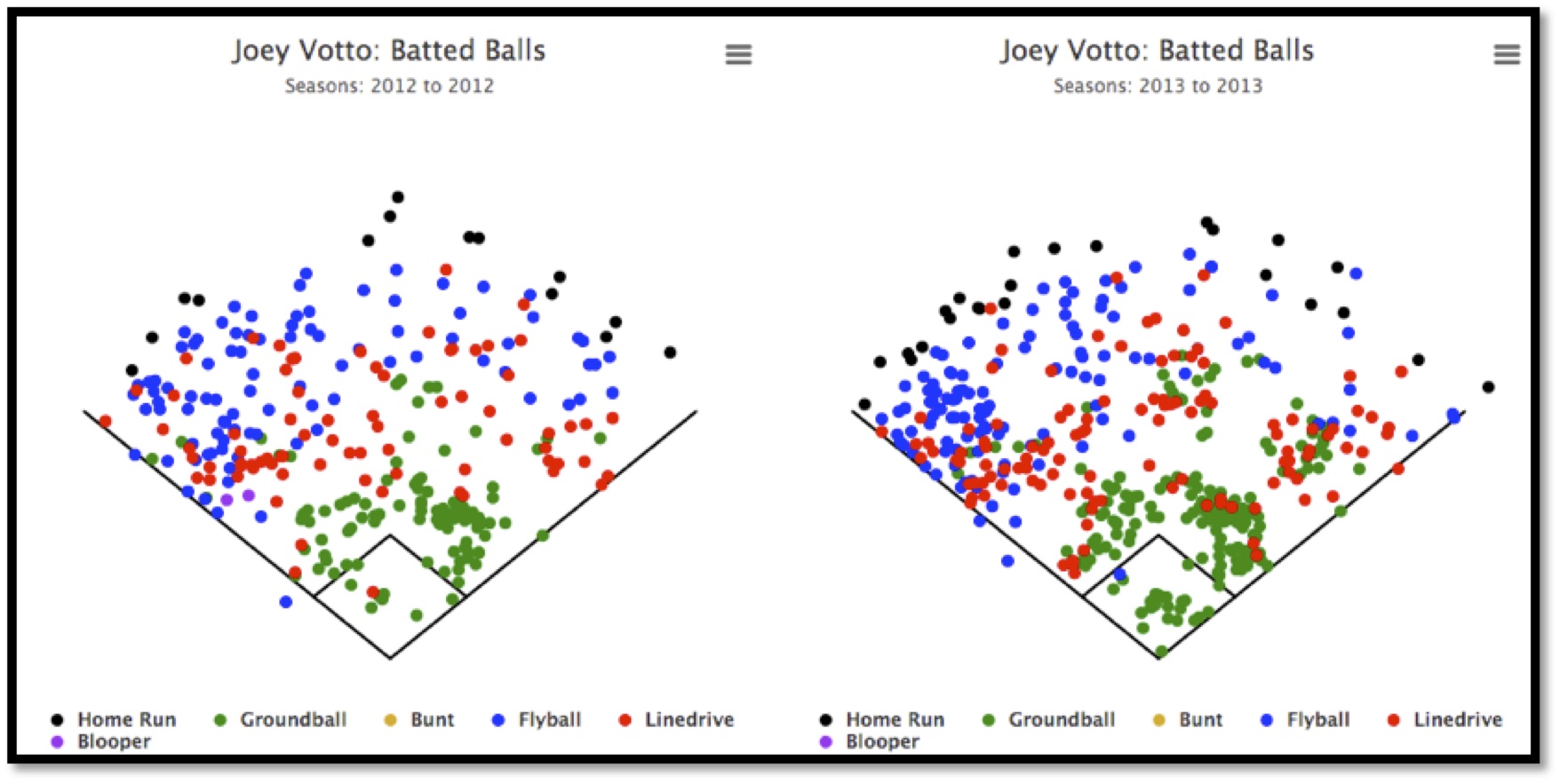 If anything, Votto has become an opposite field hitter, which largely frustrates the effectiveness of shifts. He shows a slight tendency to pull ground balls, which is why youÃ¢â‚¬â„¢ll still see teams shift infielders. But his line drives (red dots) are spread all over the field, so it’sÃ‚Â reasonable to expect Votto’s batting average will return to its .300-plus level.

Joey VottoÃ¢â‚¬â„¢s power has been affected by his 2012 knee injury at different times in various ways. In 2012, his power vanished suddenly and completely for the remainder of the season after the traumatic injury and surgery.Ã‚Â Votto played a full season in 2013 without having finished rehabbing his knee. He explained last week,Ã‚Â “I was still rehabbing my leg that year” from two knee surgeries in 2012. “One of my lesser abilities was to drive the ball. I decided to do everything I can to get on base as often as possible.”

In 2013, Votto’s power returned from the depths of late-2012, but didn’t recover fully to the heights of 2010 or pre-injury 2012. Despite that, Votto was eleventhÃ‚Â in the NL in SLG and twenty-thirdÃ‚Â in ISO. His 24 home runs tied for tenthÃ‚Â most in the NL. In the first month of 2014, even with his tendinosis worsening, Votto maintained his power. On May 10, his ISO stood at .210 Ã‚Â and he’d hit six home runs, which extrapolates to 27-28 for the season, good for sixth in the NL. 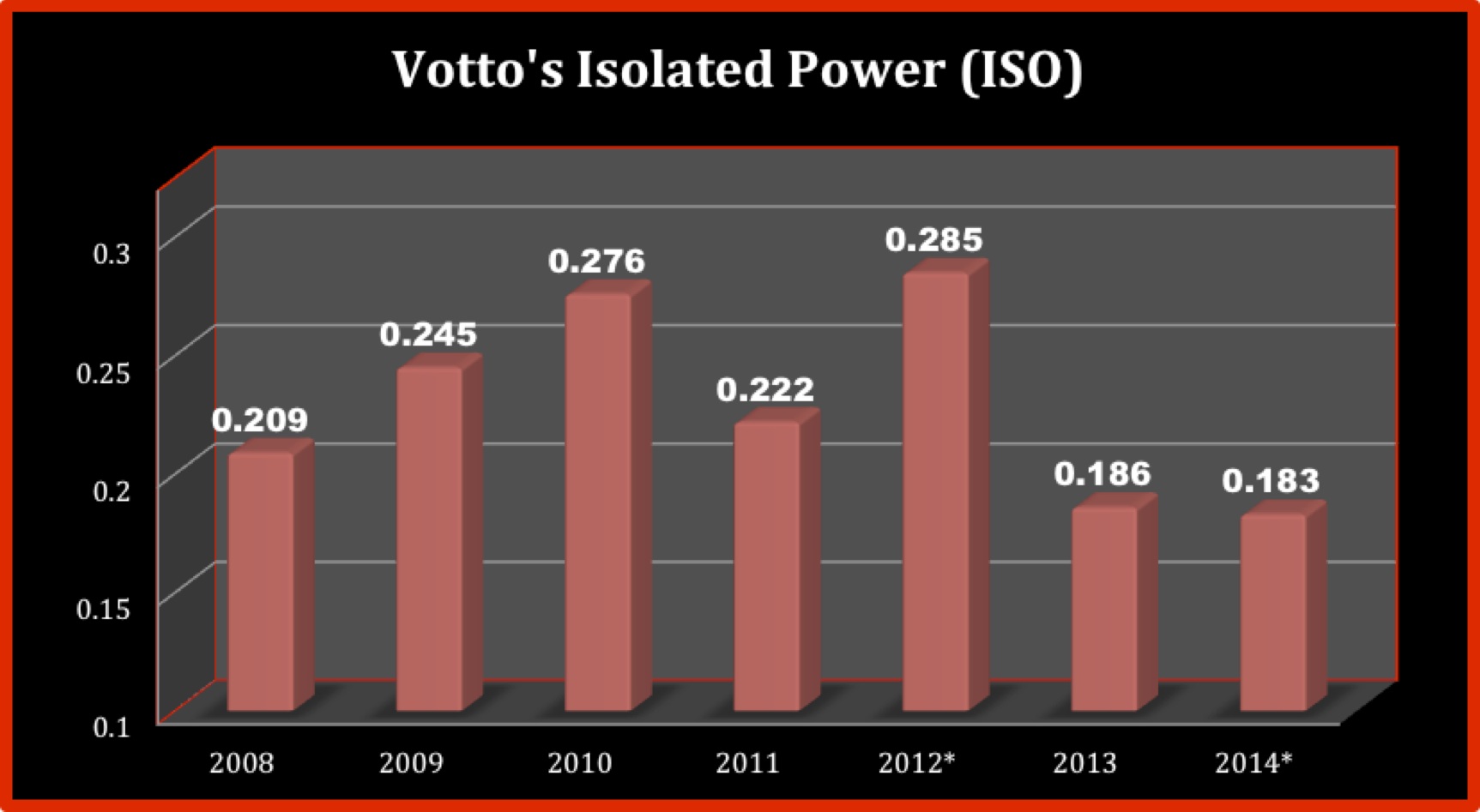 You can look at old-school measures like batting average and home runs. You can look at stats that depend on other players on the team, like runs and runs batted in.

Or, you can look at stats that isolate the impact the hitter has on his team scoring runs, independent of what other players on his team actually do. On-base percentage (OBP) is one of those stats. Since the start of 2009, of all players with at least 1,800 plate appearances, Joey Votto has the highest OBP (.427) of any major league player. Miguel Cabrera is second (.411), Joe Mauer third (.402), Prince Fielder fourth (.398) and Mike Trout fifth (.395).

In terms of runs created, Votto has been outstanding. From 2010-2013, Joey Votto was second in the major leagues in wRC+ (Miguel Cabrera was first). The average major league player is 100. 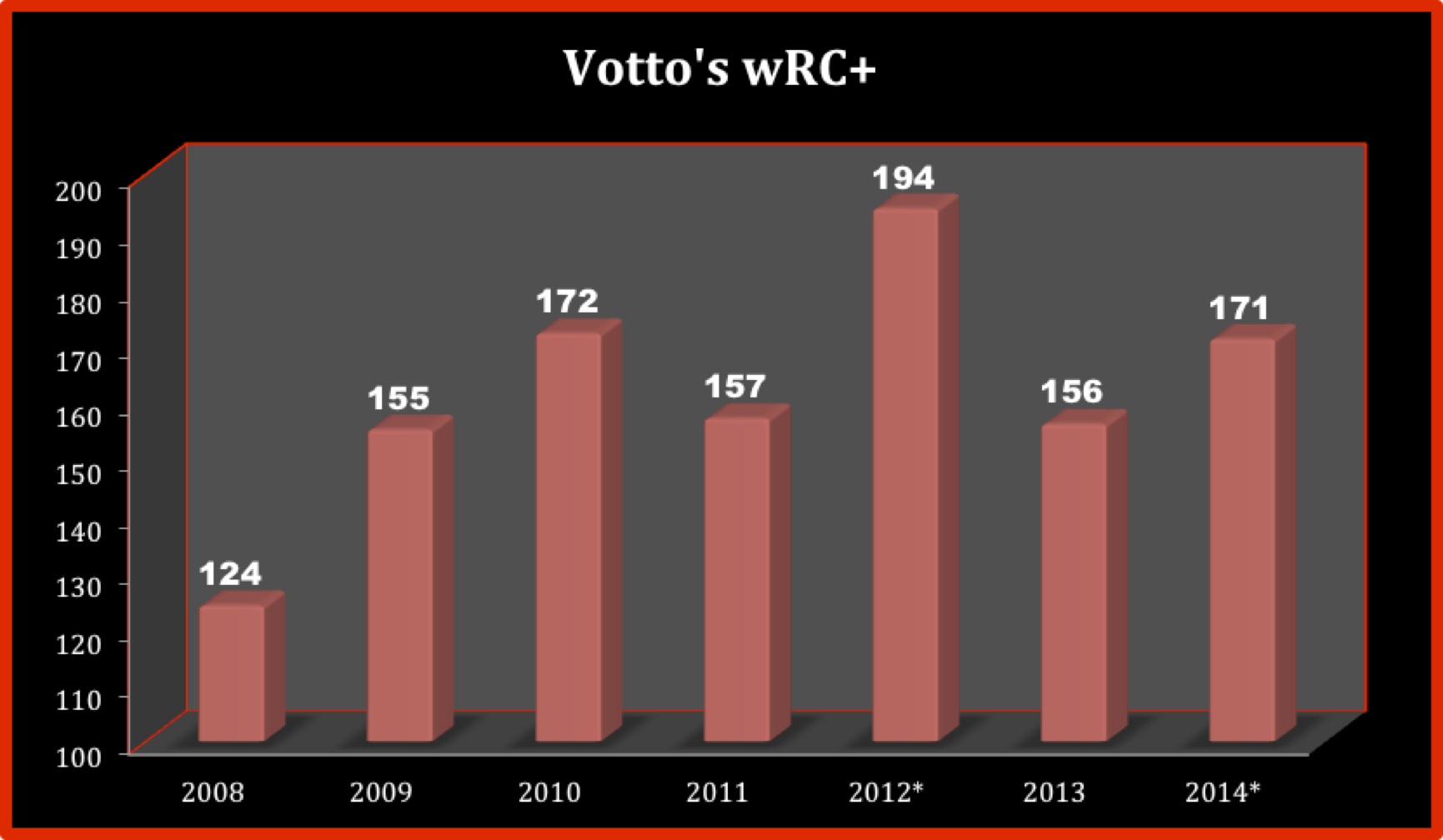 VottoÃ¢â‚¬â„¢s new hitting approach produced his best year, the pre-injury 2012 season. His injury-abbreviated 2014 was on pace to match his MVP 2010 season in terms of overall contribution to runs scored. This metric adjusts for park factors and league-wide run environment, which simple counting stats like HR and RBI don’t.

Joey Votto recentlyÃ‚Â said he is completely healthy and that his legs will allow him to drive the ball as in the past. If that’s the case,Ã‚Â Reds fans can expect Votto to put up numbers at least as he did in 2013, when he was second in the NL in offensive contribution, but with more power.

In other words, one of the best hitters in the league and an MVP candidate.