Redleg Nation, you can all breathe a major sigh of relief. Joseph Daniel Votto will be returning to the Reds lineup tomorrow. It will be Votto’s first appearance in a game since July 5th, 2014. This will be the first time Votto has stepped on the field for a game in 244 days, but who’s counting?

Also worth noting, Votto will be batting in second in the Reds lineup. That may or may not mean anything for the regular season, but as you probably already know, we here at Redleg Nation are major advocates for Votto batting first or second. Votto will also be playing first base (he could have debuted at DH).

The news was first broke by Mark Sheldon. Here is a picture from Sheldon of tomorrow’s lineup: 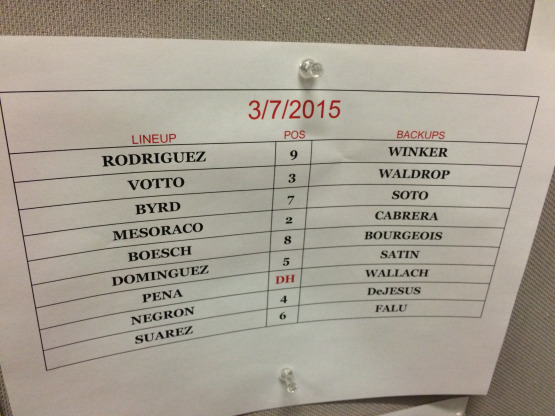 Votto: Ã¢â‚¬Å“I felt like I was in pretty good place going into spring, but we were making sure we were cautious and not taking any risks.Ã¢â‚¬Â #reds

#Reds Joey Votto said he slid as part of yesterdays tests, will be full-go in game on Saturday, no limitations

C. Trent Rosecrans of the Cincinnati Enquirer had more on Votto’s return. The Reds take on the Cubs today at 3:05. Votto will make his debut tomorrow against the Royals at 3:05. The game is on 700 WLW tomorrow.