Over the past week we have examined several factors that may have led to a decline in Major League BaseballÃ¢â‚¬â„¢s scoring environment.Ã‚Â In today’s game, there is better scouting technology, faster fastballs, a larger strike zone, defensive shifts, PED testing, and moreÃ‚Â bullpen matchups than in earlier years. All of this has MLB feeling a little run down.

This article asks a follow up question: Has the market for players reacted to a low scoring run environment? If hitting has become more scarce than pitching, as has been argued here and elsewhere, are teams starting to spend more in free agency to acquire hitting?

In labor market analysis like this, the devil(s) lay in the details. There is already an established method for projecting how much teams are paying for a win above replacement, Ã¢â‚¬Å“$/WARÃ¢â‚¬Â, written by Dave Cameron. CameronÃ¢â‚¬â„¢s method is a bit more complex than the method I used for this article because he uses a weighted projection system that includes both ZIPS and Steamer. After averaging these two projections, it takes a playerÃ¢â‚¬â„¢s previous yearÃ¢â‚¬â„¢s performance and regresses it according to a normal aging curve.

For this article, I adopted a less complicated methodology: For all the players in the sample, I took their 2014 WAR and then discounted it according to the aging curve. For players where there was a big gap between this projection and SteamerÃ¢â‚¬â„¢s projection (>=1 WAR), I used SteamerÃ¢â‚¬â„¢s value (this helps account for players returning from injury).

All relief pitchers were removed from the estimates because they are notoriously funky when it comes to WAR. Their inning projections and performance metrics vary widely from year-to-year. For example, under our projection, we would be saying the Giants are paying $40 million per win for Sergio Romo. Even if you believe signing Romo to a $15 million, two-year deal is not a great singing, itÃ¢â‚¬â„¢s unrealistic to argue the Giants overestimated his market value by a factor of five.

This left 54 players who have signed contracts as of 1/22.

To check if this simplifiedÃ‚Â method for projecting future player value is realistic, I tested to see if a player’s total contractÃ‚Â WAR predicts the amount of money each player received in free agency. The model could explain about 92% of the variance in the data. That is, honestly, almost too good.

At first, I was skeptical of this result. 92% is a pretty big number for only single variable to explain. Yet by the time a player reaches free agency they are six years into a Major League career. Loosely, six years translates into 3,000 at-bats or 600 innings as a starting pitcher. Past performance is the best predictor of future performance; after acquiring six years of professional experience, it is not unreasonable to assume that players are known commodities. 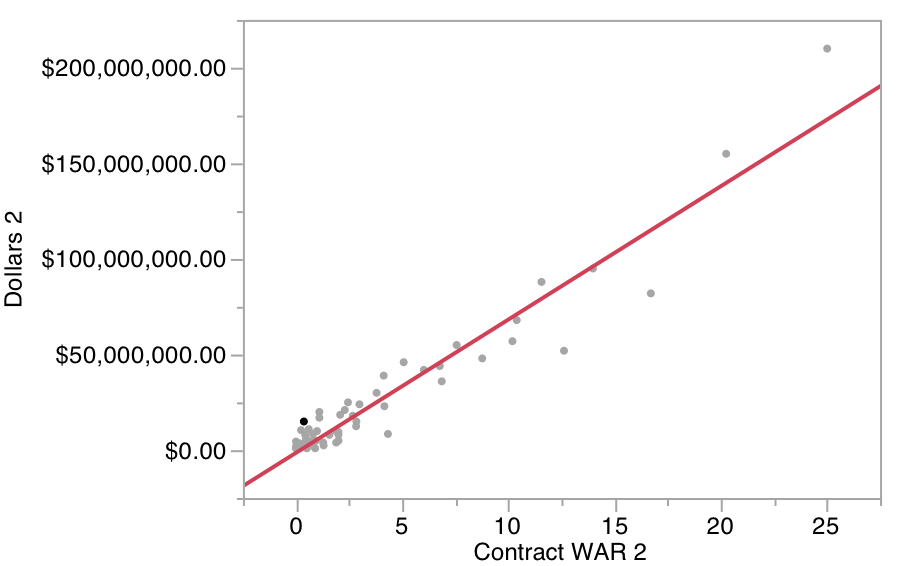 This model suggests two ways to think about free agency:

First, age and injury are the two most important factors in projecting a playerÃ¢â‚¬â„¢s future value. Arguments like Ã¢â‚¬Å“this player changed their swingÃ¢â‚¬Â or Ã¢â‚¬Å“that player hired a new workout expertÃ¢â‚¬Â are probably not going to make a large difference in a playerÃ¢â‚¬â„¢s performance.

Second, most teams value players similarly. While their projection systems are far more sophisticated than anything we discuss around here, they come close to the same results.

Across all players, teams paid about 7.53 million per WAR in the post-2014 offseason [the median was 6.7M]. For a few contracts, teams paid a lot of money per WAR for a player. The prime example of this is Kansas City paying Edinson Volquez over $18M/WAR.

Considering the model used here has a more conservative approach than Cameron (no relief pitchers and taking positive WAR projections for injured players), there is good reason to believe that the value for a WAR has increased in the past year.

While thatÃ¢â‚¬â„¢s a fairly obvious point to make (more money in baseball = more dollars chasing the same amount of talent), correctly projecting the value of a player going into the offseason can be the difference between signing a player and not signing, say, a left fielder or shortstop. Using incorrect models can also lead you to say things that would cause others to question your sanity, such as, Ã¢â‚¬Å“Mr. Volquez, would you play baseball for us if we offered you ten million dollars a year for two years?Ã¢â‚¬Â

III. Ã‚Â Are teams today paying about the same for pitchers and hitters perÃ‚Â WAR?

Here is a graphical representation of the distribution of $/WAR for hitters and pitchers. The green triangles are the 95% confidence interval, while the middle of the diamond shows the average. (The data point that is selected in the pitching column Ã¢â‚¬â€œ its darker Ã¢â‚¬â€œ is Edinson Volquez. More on that contract in a bit). 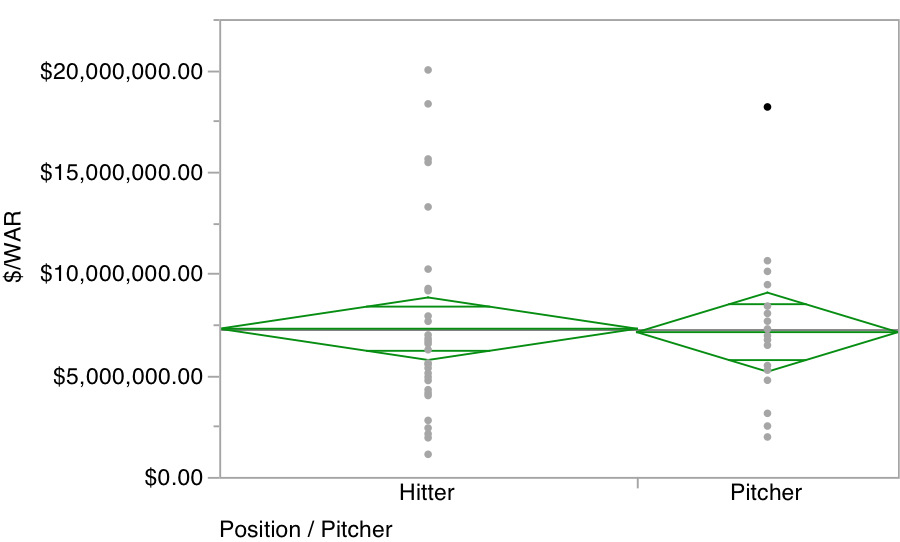 By breaking down the data for hitters (all position players) against starting pitchers, we can see there is a small gap between the two numbers. On average, teams are paying hitters 7.28M/ WAR, while pitchers are getting 7.11M/WAR. A quarter of a million is fairly close considering how large these numbers are to start with.

The right takeaway is that pitchers and hitters are being paid about the same per WAR. Yes, hitters have a slight edge in this data, butÃ‚Â 2+ WAR players get more than the market rate per WAR, so one more 2+ WAR pitcher in this yearÃ¢â‚¬â„¢s free agent class could have tipped the scale the other direction. It’s close.

Now, up to this point you may have thought that I was using the Royals as a convenient punching bag because Volquez jokes play well to Reds fans. This is only half true. By removing VolquezÃ¢â‚¬â„¢s contract, pitchers $/WAR falls to 6.53M. VolquezÃ¢â‚¬â„¢s 18M/WAR is almost double the next highest $/WAR for pitchers (second place goes to A.J. Burnett, at 10.6M/WAR). Even if we remove VolquezÃ¢â‚¬â„¢s contract from the dataset, though, it still doesnÃ¢â‚¬â„¢t pass the necessary tests to be confident that teams are paying more for hitters or pitchers.

But what does that mean? To answer this question, we have to delve into WAR a little further.

Wins Above Replacement for pitching has many components, but for the purpose of our work, it is important to emphasize that WAR is a relative comparison: it compares a pitcherÃ¢â‚¬â„¢s performance against a Ã¢â‚¬Å“replacement levelÃ¢â‚¬Â player. This level moves from year-to-year. If there are a greater number of talented pitchers in baseball, then the Ã¢â‚¬Å“replacementÃ¢â‚¬Â level talent bar will rise. Moreover, WAR contains a Ã¢â‚¬Å“run environmentÃ¢â‚¬Â component, so if teams are scoring fewer runs per game, then pitchers must perform at a higher level to be worth a Ã¢â‚¬Å“winÃ¢â‚¬Â.

The key question then, is this: Are teams using counting stats that do not account for run environment (strikeouts, walks, wins, losses, or ERA) when they pay out contracts or are they using contextuallyÃ‚Â sensitive metrics?

The evidence presented above, that hitters are pitchers are receiving roughly similar compensation, is an indication that major league teams use context sensitive measures (think: FIP, xFIP, SIERA, OPS+) to evaluate free agents. They adjust the stats they use to evaluate players based on park factors and run environment. As it becomes harder to hit a baseball, it becomes more valuable to hit a baseball. The same is true for pitchers: as it becomes easier to create outs, it becomes harder to earn a big payday.

This data suggests that even though pitchers are racking up more strikeouts and posting lower ERAs, teams have adjusted their expectations compared to previous offensive season (well, perhaps not the Royals). The evidence from the 2015 offseason suggests that hitters are being paid a bit more than pitchers, but teams are expecting more out of their pitchers than they did in previous years.

Steve and I tested three other years (2006, 2009, 2012), during one of those (2006), we found that our WAR-based value projection system did not map closely to free agent contracts. While forÃ‚Â more recent years our projection system worked well, in 2006 it only explained about half the variationÃ‚Â in the data. This could mean that teams were using different aging models to project future player performance, but it could also mean that in 2006, many teams were not using modern statistics when handing out contracts. Keep in mind that WAR and similar metrics, that are able to compare pitcher value to hitter value, are relatively new.

This is a long way of saying that front offices on average seem to be using modern holistic metrics to determine player value — ones that compare the value of pitchers to hitters and adapt to changing run environments through evolving standards for replacement players. Their proprietary data is more accurate than anything the blogosphere has to offer; which makes sense: if I had to hire ballplayers and pay them tens of millions of dollars, I would pay statisticians thousands of dollars to tell me which ones to hire.