Ã¢â‚¬Â¢ This morning’sÃ‚Â Cincinnati Enquirer (Rosecrans) has a great article about Zack Cozart and the Reds shortstop position. It includes a detailed analysis of Eugenio Suarez, an infielder who plays shortstop that the Reds acquired from the Detroit Tigers in the Alfredo Simon trade.

Even with his paucity of offensive contributions in 2014, Cozart had a 2.4 WAR season, according to Baseball-Reference.com on the strength of his defensive contributions. According to the the SABR Defensive Index, an aggregation of two defensive metrics distributed to voters in Gold Glove voting, Cozart was the best defensive shortstop in baseball, better even than Gold Glove-winner Andrelton Simmons of the Braves.Ã‚Â That defensive prowess, at perhaps the game’s most important defensive position, is precisely why the Reds aren’t giving up on Cozart.

Ã¢â‚¬Â¢ John Fay adds his own perspective on the Latos/leadership issue. It’s a valuable point of view coming from an outsider who is frequently in the clubhouse.

I’m in the clubhouse a lot. I agree with Price: The shots Latos took were unfair.Ã‚Â Take for example the thing about a player “roping the clubhouse guys.” That was a shot at Bailey, who does the real cowboy roping stuff. I have no doubt that Bailey would do such as thing. There’s lots of gags and tomfoolery in every clubhouse.Ã‚Â But Bailey’s work ethic is unquestionable. He’s all-business guy when it comes to taking care of himself and getting his work in.Ã‚Â Latos said something about Aroldis Chapman sleeping until the seventh inning? May very well be true. But I’d rather have Chapman rested than on the bench, saying “hey batter, hey batter.” Chapman may have had the most dominating year ever by a pitcher, so what he did worked.

Ã¢â‚¬Â¢ Speaking of Homer Bailey, the tall Texan pitched off a mound for the first time since his elbow surgery last fall. (Rosecrans)

“I’ve been looking forward to it, really,” Bailey said. “Even in the offseason, playing catch and stuff, you see guys throw bullpens and in your mind, you think you can still do it. Getting out of a brace the first time, you think you can walk on the mound and throw, and that’s not necessarily the case. It was kind of really rewarding, it felt really good.”

Bailey said he felt good throwing but that future bullpen sessions will be a better test. Assuming no setbacks, Bailey will pitch in live spring training games but will likely miss the first few games of the regular season. Johnny Cueto will pitch Opening Day and Mike Leake will pitch Opening Night on April 8. Bailey might be ready for the Cardinals series the first weekend.

Ã¢â‚¬Â¢ Keep an eye on the starters who are competing for open spots in the rotation because of the trades of Latos and Alfredo Simon. Bailey’s short absence from the spring training rotation will create another brief opportunity for others to show their stuff. (Fay)

Some of the pitchers competing for the fourth and fifth spots Ã¢â‚¬â€ Paul Maholm, Raisel Iglesias and David Holmberg Ã¢â‚¬â€ could get starts in Bailey’s absence. “Homer won’t be in that week of games,” Price said. “That’s going to create potentially once or twice through the rotation before we see Homer. That’s an open spot right there. You could see Maholm, Iglesias or Holmberg, any number of guys who get a chance to start. We’ll start to see . . . you’re not going to have to figure it out too much based on the number of innings certain guys are getting, who’s competing for the starting rotation and who’s more geared for the bullpen.

Ã¢â‚¬Â¢ Brandon Phillips, who turns 34 in June, doesn’t lack in self-confidence. He insists he’s still one of the best players in the game. (Danneman)

A multiple time All Star and Gold Glove winner, Phillips was left off MLB Network’s list of the top ten second basemen in baseball. Phillips shrugged it off and said he plays for the fans and not for “nerds behind computers with their statistics.”Ã‚Â “I feel like I’m more of an entertainer than a baseball player. I do this for the fans. I do this to just have fun and enjoy the game while I can because I’m going to be retired more than I am playing this game, so I’ve got to go out there and play the game the best way I know how. Go out there, have fun and put on a show.”Ã‚Â The three-time All Star said he’s not just one of the best second basemen, but feels he’s still one of the best players in baseball regardless of position.

Injuries have slowed the Reds second baseman the last two seasons. His offense – both power and speed – have declined steadily. 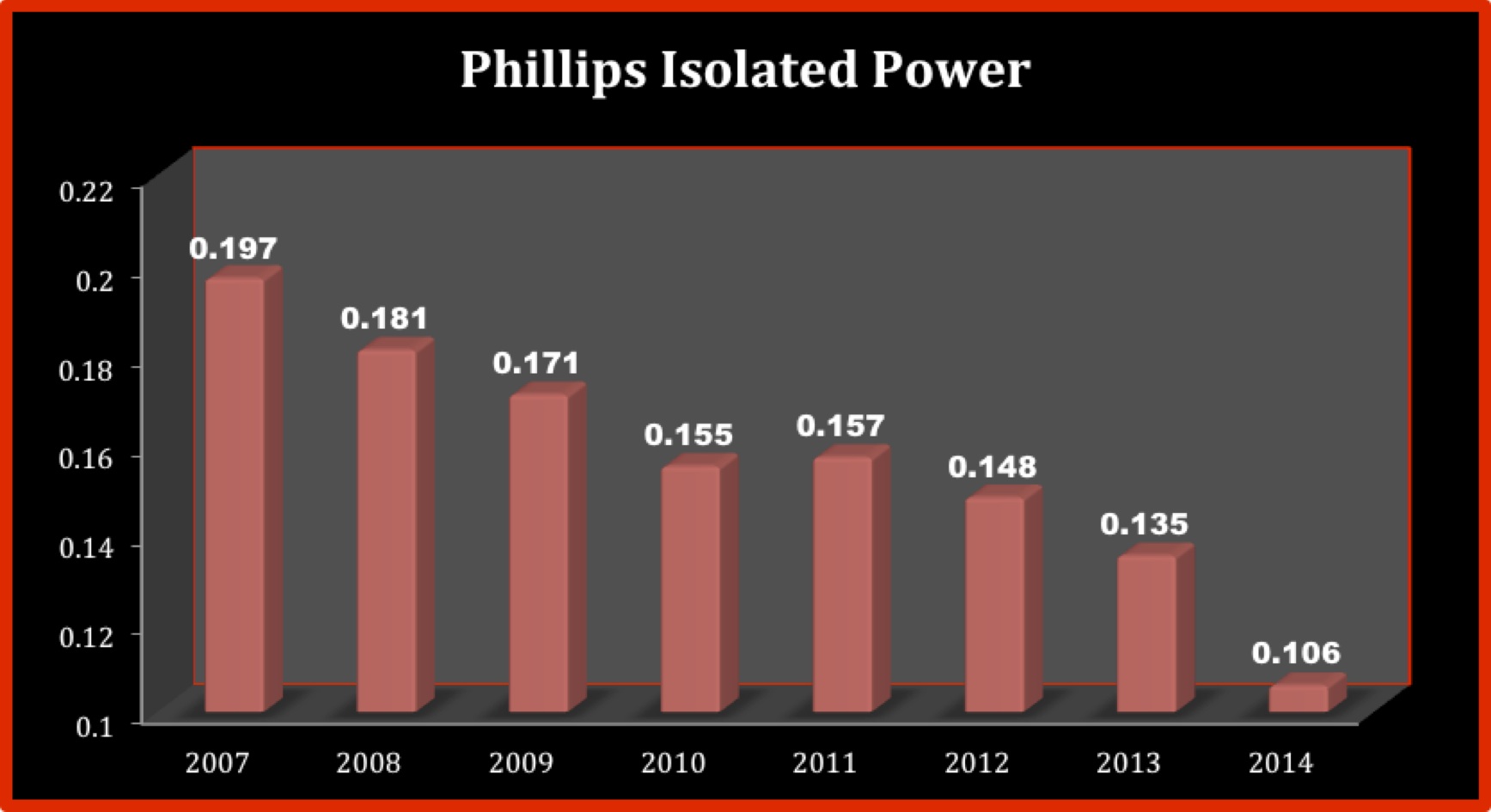 One of these seven players will have to hit seventh in the lineup: Hamilton, Mesoraco, Votto, Frazier, Bruce, Byrd and Phillips. Assuming Billy Hamilton is a lock for leading off, Phillips is the obvious candidate to bat right before Zack Cozart and the pitcher.

Ã¢â‚¬Â¢ Manager Bryan Price said if he knew then what he knows now he would have handled Jay Bruce’s knee rehab differently. Bruce passed the medical tests but Price admits that factors like how the team was performing and Bruce’s desire to get back on the field played a role. (Fay)

“It’s an after-the-fact thing,” Price said. “If I could have known how it was going to turn out, I would have sent him out and let him do some rehab and really verify that he was feeling great. But there were a lot of components in that decision. We were scuffling. He was trying to be that responsible, middle-of-the-order player. We had injuries at the time. We weren’t playing terribly well.

Ã¢â‚¬Â¢ Jon Moscot (23) has made a positive impression in his first major league camp. (Fay)

But to the discerning eye, like that of former pitching coach Bryan Price, Moscot has all the right stuff to be an effective starter.

“He throws efficiently,” Price said. “He throws plenty hard enough. He’s an 89 to 92, maybe a touch better at times. It’s command. It’s bottom-of-the-zone command, side to side. Very, very good slider. His change-up has made great strides over the last season. As I tell the starters, if you’re going to start, you need that off-speed pitch, some kind of change-of-pace pitch, but primarily a change-up, if you’re going to be really good.”

Ã¢â‚¬Â¢ Another pitcher off to a good start in Goodyear is 21-year-old Nick Travieso. (Sheldon)

The organization’s Minor League pitcher of the year in 2014, Travieso was 14-5 with a 3.03 ERA in 26 starts for Class A Dayton.Ã‚Â “I was really looking forward to this year,” Travieso said. “I felt like once I got that call to big league camp, I really kicked it into gear the last month before I came out. My offseason routine really worked for me and I feel like I am stronger than I’d been the last two years out here.”

Ã¢â‚¬Â¢ The MLB Network ranked their top 100 players and five Reds made the cut: Johnny Cueto (#16), Joey Votto (#32), Aroldis Chapman (#61), Todd Frazier (#74) and Devin Mesoraco (#91). Jay Bruce and Brandon Phillips dropped off the list. The Cardinals had five players in the top 50 and six overall. The Washington Nationals had eight players make the list, including four members of their starting rotation. Ã‚Â Matt Wilkes has a post about the Reds players on the list.

Ã¢â‚¬Â¢ It’s snowing pretty hard in Cincinnati this morning, but that didn’t stop Reds fans from standing outside in line. Today is the first day that single game tickets are on sale.

One fan, Chris Long, wanted to make sure he was first in line, so he sat at GABP for roughly three hours. For Long, it’s just not the same to order online.Ã‚Â “The experience,” Long said, “It’s just coming down here and having a good time even though it’s freezing… having a good time and being at the ballpark.”Ã‚Â Long made it worth his wait, purchasing over 100 tickets for this season.

Ã¢â‚¬Â¢Ã‚Â Bleed Cubbie Blue takes a look at the Reds and concludes with a shot at the Brennamen.

Finally, as you well know, the Reds have the most despicable broadcast team in the major leagues. Marty Brennaman has dissed the Cubs and Cubs fans many, many times on the air. He turns 73 this year and really, it’s time for him to retire. I can’t think of any team broadcaster — not even Hawk Harrelson — who says such awful things about his team’s opponent. I realize he’s just pandering to his fanbase, but so does Harrelson and he doesn’t do what Marty does. And don’t get me started on Thom Brennaman, either. Suffice to say I try to avoid listening to him at all costs.