How much should the Reds spend on their payroll?

You’ll findÃ‚Â more than fifty shades of opinion on that, from austere discipline to costly dominance. In December, the Reds front office assured fans that the teamÃ¢â‚¬â„¢s payroll would continue to increase again in 2015. Owner Bob Castellini said:

General manager Walt Jocketty went a step further and characterized the size of the increase.

Ã¢â‚¬Å“ItÃ¢â‚¬â„¢s not increasing to the level it would need to have been able to keep the guys we traded. ItÃ¢â‚¬â„¢s still increasing quite a bit over last year, but everyoneÃ¢â‚¬â„¢s salaries are jumping up. We knew that going into last year.Ã¢â‚¬Â (Rosecrans)

Now that extensions have been negotiated, arbitration avoided and free agents signed, how much will the Reds spend on payroll? How does their spending compare to other clubs and previous Reds payrolls? And has the club followed through on its promise to fans made several weeks ago?

This chart shows the Reds annual payroll back to 1988 Ã‚Â and provides the context to evaluate its size and growth. 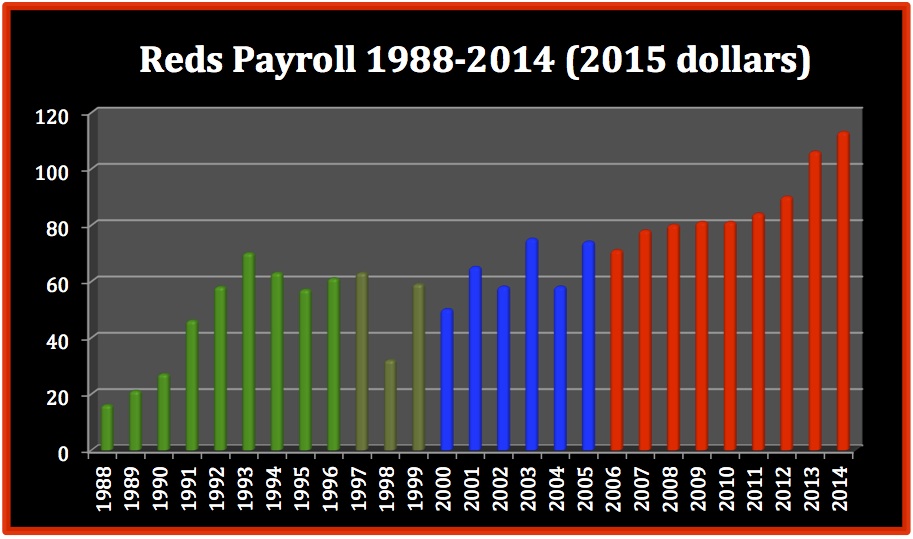 [The bright greenÃ‚Â bars represent years that Marge Schott owned the team. The blue bars represent the years Carl Lindner, Jr. owned the team. The red bars show payroll levels under Bob Castellini. The three olive-colored bars were during Schott’s ownership but her legal status regarding the team was in limbo. The numbers are adjusted for inflation (based on Bureau of Labor statistics).]

Marge Schott, the first woman to own a major league team, bought the Reds before theÃ‚Â 1985 season. Schott boosted payroll in the aftermath of the 1990 World Series championship. Due to various offensive statements she made,, Schott’s day-to-day management of the team was suspended, resulting in a sharp decline in salaries in 1998.Ã‚Â Schott sold the club to billionaire Carl Lindner Jr. early in the 1999 season. Linder kept payroll fairly constant, although under his ownership Barry Larkin signed a final lucrative contract (2001-03) and the team agreed to a 9-year, $116.5 million deal with Ken Griffey, Jr.

After five consecutive losing years under Lindner’s ownership, Bob Castellini led a group that purchased the Reds in December 2005. The first six seasons, Castellini kept total payrollÃ‚Â within a narrow range while the roster was undergoing turnover. Beginning in 2012, the Reds payroll began to grow, jumping $30 million between 2011 and 2014. Castellini set the Reds 2014 payroll around $114 million, including signing bonuses.

The gigantic rise in Reds payroll over the last generation reflects overall trends in major league baseball.Ã‚Â Player salaries have skyrocketed due to two major factors: free agency and the explosive growth in the sport’s revenue.

Prior to 1975, a reserve system allowed teams to own players as long as they wanted. Even though contracts were generally just one year in length, players could only negotiate with the team that owned them. The reserve system (so-called because teams could “reserve” players) dated back to the 19th century. Prior to the establishment of the amateur draft, the one time a player could choose his team was at the start of his career. Even that limited freedom came to an end in 1966 with the new draft, as players were bound to the club that selected them.

In December 1975, three years after the Supreme Court rejected Curt FloodÃ¢â‚¬â„¢s challenge to the reserve clause, players won the right to free agency from an arbitrator’s ruling. (It should be noted that MLB teams still have up to twelve years of control over individual players – six in the minor leagues and six in the majors). As you would expect, clubs pushed back against free agency rights, triggering charges of illegal collusion and several decades of labor unrest. But the impact of a freer labor market on player salaries was evident right away. 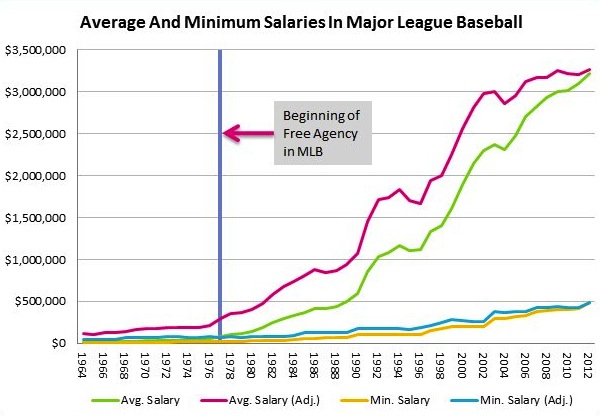 [Chart from the Business Insider]

The second major cause of rising player salaries has been the explosive growth in revenues coming into the sport. The primary drivers are the sale of national and local broadcasting rights and online platforms. Baseball income has grown from less than $2 billion (gross adjusted revenue) in 1995 to a staggering $9 billion today.

The Reds benefit like all 30 major league teams from national broadcast contracts and online/mobile platform revenue, as well as from league revenue sharing. Regarding local sources of income, the Reds’ Fox Sports Ohio contract expires in 2016. It’s believed FSO currently pays the club $30 million per year for broadcast rights. Based on recent experiences of teams in similar markets, it’s reasonable to expect a new deal will at least double that payout, possibly including an equity share for the club.

The 2015 Reds may not be an old team, but they do have a large number of players who have reached arbitration eligibility. Three (Todd Frazier, Devin Mesoraco and Zack Cozart) hit that status for the first time in 2015. Other players (Aroldis Chapman and Mike Leake) were already in the arbitration system and earned large salary bumps. The Reds have contracts with 13 additional players for 2015. This table shows 2014 salaries, 2015 salaries and dollar increases for those 18 players, sorted by size of increase. 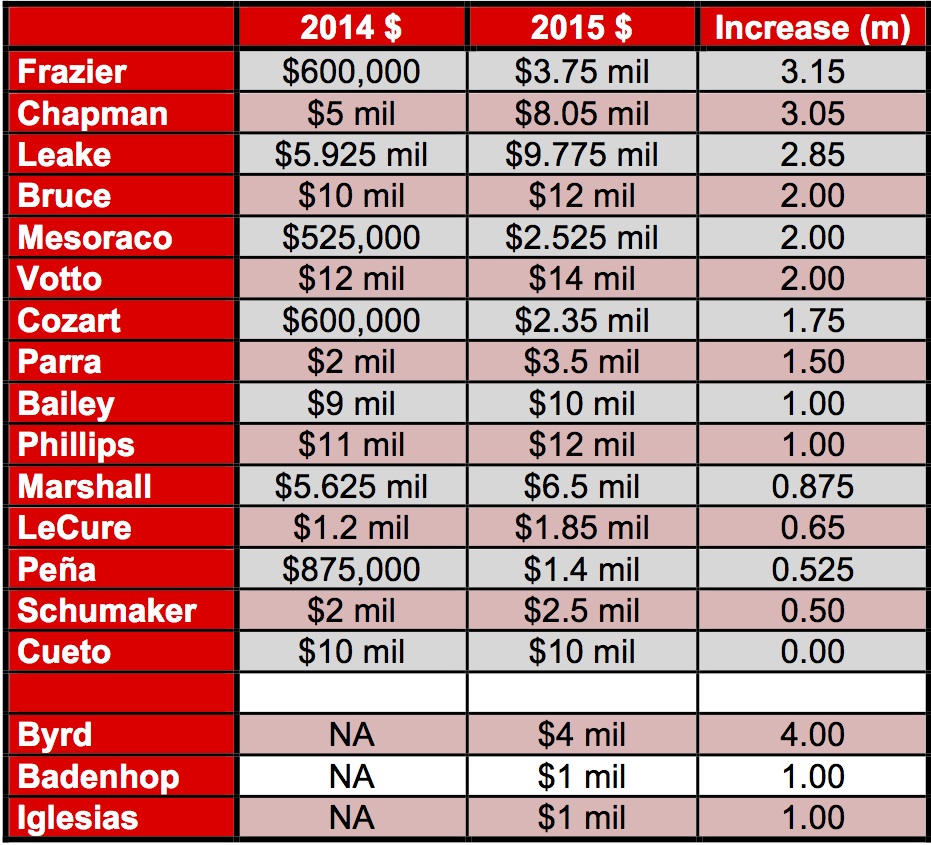 Most of the growth in payroll commitment for 2015 was for the arbitration-range players.

The salaries of those 18 players add up to about $107 million. That includes subtracting the $4 million payment from the Phillies toward the Marlon Byrd commitment. The Reds owe about $8 million in “dead money” to players no longer with the organization. They’re paying Ryan Ludwick $4.5 million, Bronson Arroyo $1.36 million and we got Jack for that too, for $2 million. That brings the total payroll up to $115 million. League-minimum salaries for 7-9 remaining roster spots (nine if Sean Marshall and Skip Schumaker start on the DL) add another $4-4.5 million. 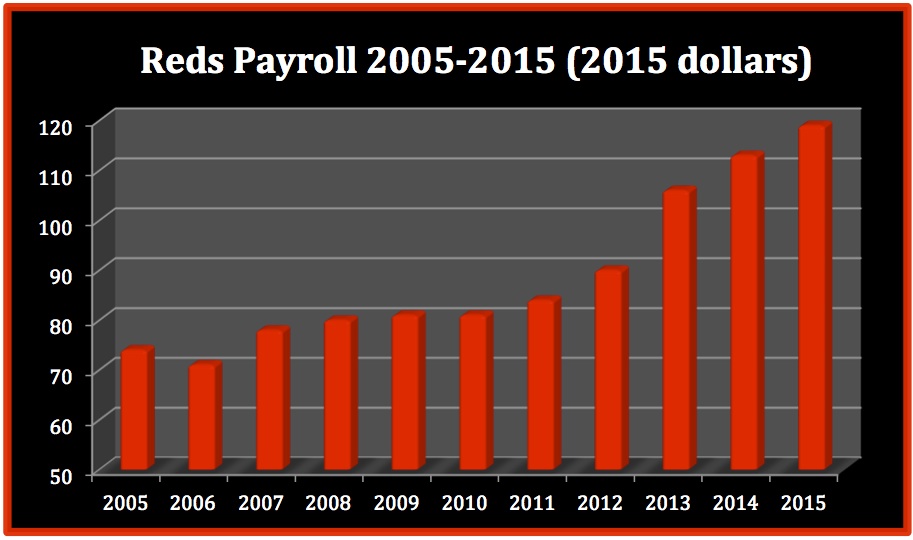 That puts the Reds current payroll commitment to a number around $119 million. That’s a $5 million step increase over 2014. The above chart shows what the Reds spending on payroll looks like in the Castellini era, including 2015.

The Reds paid the 11th highest Opening Day payrollÃ‚Â in MLB last year, the most in the NL Central. While that’s less than half what the LA Dodgers spend, it’s still a bigÃ‚Â commitment considering the market size of Cincinnati. Yes, if youÃ‚Â widen the criteria to include folks within a two-hour drive, the team’s footprint includes Columbus, Dayton, Lexington, Louisville, Indianapolis and parts of West Virginia. But two-hour drives tend to be infrequent, planned trips, not conducive to spur-of-the-moment and frequent attendance.

With salaries league-wide galloping ahead, the Reds will slip a few spots in the payroll pecking order, even with the 5 percent increment. But they’ll still remain in the group of teams bunched in the middle-third of the league, with payrolls between $115-$120 million.

The service-time and contract structure of the team hand-cuffed the club. They had to trade and release players to accommodate the raises due the remaining roster. That left a small amount to sign Marlon Byrd and Burke Badenhop at bargain-basement prices.

It’s impossible for outsiders to know what dollar figure Bob Castellini submitted to Walt Jocketty as the budget for 2015. Maybe it was $120 million. Maybe it was higher and there’s a little wiggle room if the right player (read: outfielder) becomes available the next few weeks or at the trade deadline. If instead, the owner had written $130 million on the napkin, the Reds wouldn’t have had to shed Mat Latos and/or Chris Heisey – or they could have reached a bit higher for a left fielder and bench players.

The bottom line is that the front office has followed through on its stated intention to increase payroll. Whether that amount gives Reds fans pain or pleasure (or both) remains to be seen, starting April 6.