A few years back, I heard Reds announcer Marty Brennaman say during a game broadcast that someday, he would list his 10 favorite Reds players during his time with the team. His list would not be based on playing skills, but on how well he liked the player as a person. MartyÃ¢â‚¬â„¢s list would be something I would enjoy seeing.

The idea got me thinking about the players who would appear on my own list since I started announcing in 1988. My list would not be as interesting to others because many of my favorite people never made it (or have not made it yet) to the Major Leagues, like Kevin Coddington, Andrew Means, and Drew Hayes, among others.

Broadcasters travel with the team and see the players in a different element. In most leagues in the minors, all of your travel is by bus, so you are basically embedded with a group of 25 players, three or four coaches, and two trainers, for five months. I would make a comparison to a classroom situation. If there are 25 people in a classroom, there are going to be a few that share similar interests and values, and those are the ones that you become closest to. There are going to be several that you donÃ¢â‚¬â„¢t know as well but are friendly enough that you can have a conversation with them at any time, and some years, there might even be one or two that you just donÃ¢â‚¬â„¢t care for. They carry themselves in a manner that clashes with your own personality. As a broadcaster, once you begin the game, your job is to put all of those personal feelings aside and treat everyone the same. That is part of being a professional. Sometimes it is easy, sometimes it can be challenging.

In 1990, I was a young broadcaster with the Kinston Indians in the Carolina League, a Cleveland Indians affiliate. This was actually my first year as the primary voice of a team after two seasons as a secondary announcer with Howard Kellman in Indianapolis. In July of that season, our team received two infielders at roughly the same time. One was the highly-regarded first round draft pick of the Indians that summer, a power-hitting shortstop from the University of Iowa named Tim Costo. His arrival in Kinston was exciting enough that his first session of batting practice on our field drew a big crowd. From the first day he got to town, there was conversation about how long it would take him to get to the big leagues. Costo was a really good, friendly guy and he handled the attention well, and he played well for us too. The second player arrived with zero attention. He was just a new, anonymous face on the team. This kid was friendly but extremely quiet and he seemed to prefer staying in the background.

After a few weeks, one of our catchers, Brian Johnson, said something that a lot of us were thinking. If you didnÃ¢â‚¬â„¢t know better, and you just watched the games, you would think this quiet, no-name kid from a junior college in central Illinois was actually the first round draft pick. As it turned out, Johnson was right. That unassuming kid would someday hit more Major League home runs (612) than all but six players in the history of the game! The quiet, no-name player was Jim Thome. Costo got to the Majors too and eventually played some with the Reds, but it was Thome who became the all-star. Minor League Baseball works that way sometimes.

When I joined the Dayton Dragons in 2008, I headed to spring training in Sarasota and got my first look at our club. By the time I got to Florida, I had already spent plenty of hours researching the backgrounds of the players who could reasonably be expected to break camp with our team. That is to say, I knew their career stats, the round they were drafted in, and their college program if they had come out of the collegiate ranks. What I did not know, and could not know, was anything about the playersÃ¢â‚¬â„¢ personalities.

On paper, our best player that season would be our shortstop, a supplemental first round pick from the previous season out of Rutgers. He was big for a shortstop at 6Ã¢â‚¬â„¢3Ã¢â‚¬Â, 220 lbs. His name was Todd Frazier.

I have not been to spring training in several years, but I always tell people that if you are going to go, pick the latest possible dates so you can see the team after rosters have been nearly set. I scheduled my trip that year for the very last days of camp, after the players had been through three weeks of intense pressure. Remember, for a Minor League player, spring training is the most intense time of the year. You are playing every inning in front of the people who will decide your future, who will make the decision on whether you jump to the next level on the organizational ladder, or worst-case scenario, get a plane ticket home. You are playing for your own career. Every drill, every at-bat, every pitch, there is someone watching and making mental notes.

Late in camp, the dog days have set in. The players report to the fields in the early morning hours, then play an afternoon nine-inning game. By the last days of camp, they are physically and mentally fatigued. I looked at our club and saw a team of guys who looked just as you would expect, tired, ready to get to Dayton and play. But one player was different in his approach.Ã‚Â  He was playing with the energy of the first day of camp. On the bench, he was vocal in encouraging his teammates, as if winning this meaningless spring game was somehow important to him.Ã‚Â  It was Frazier.

Before a game that spring, I approached him for the first time and introduced myself. I think I made reference to his now-famous Little League World Series exploits. He responded in his now-familiar Jersey accent and I got my first experience with his outgoing personality. I liked him right away. He was my kind of player Ã¢â‚¬Â¦ extremely competitive and driven to win but with a team-first mentality that is hard to find in the Minor Leagues.

FrazierÃ¢â‚¬â„¢s first home series with the Dragons in April of 2008 came against Fort Wayne. In his second home game, he came to bat in the bottom of the ninth inning with the score tied, one out, and the bases empty. It was an unusually warm April night, 74 degrees at game time, and most of the sell-out crowd was still in the seats. Frazier stepped to the plate and blasted one far over the left field fence to win the game, and the crowd went absolutely crazy.

As the weeks went by, FrazierÃ¢â‚¬â„¢s impact on the team was clear. Dayton Daily News columnist Tom Archdeacon wrote a fantastic story referring to Frazier as a Ã¢â‚¬Å“natural born leader.Ã¢â‚¬Â I felt that description was good, but my impression was that he was a natural born winner. Even going back to his days with the Toms River Little League team that won the world title, he was one of those guys that was going to find a way to beat you. Someone else might put up better statistics or show tools that are more impressive to the scouts in the stands, but more times than not, when push came to shove, some players just have a knack for finding a way to win. Frazier was one of those players.

Off the field, FrazierÃ¢â‚¬â„¢s personality was one-of-a-kind. Many players have nicknames for their teammates, but Frazier had a nickname for everyone. He called Marc Katz, the veteran beat writer for the DDN, Ã¢â‚¬Å“Katsy.Ã¢â‚¬Â My first reaction from Frazier each day was usually, Ã¢â‚¬Å“HowÃ¢â‚¬â„¢s it going, Nicks?Ã¢â‚¬Â

Our manager that season was Donnie Scott, a gruff drill sergeant type who had a 20+ year career in player development, and he was anything but a Ã¢â‚¬Å“playerÃ¢â‚¬â„¢s manager.Ã¢â‚¬ÂÃ‚Â  Donnie always treated me fine and I appreciated that, but no player wanted to endure DonnieÃ¢â‚¬â„¢s wrath.

But Donnie Scott loved Todd Frazier.Ã‚Â At the time, there was some talk in the media suggesting that some of the Reds star players were not bothered as much as they should have been with the concept of losing.

On May 6, Frazier had three hits in a game against Quad Cities, and the next day, the Reds promoted him to Sarasota. His time in Dayton was over. In fact, it had lasted only 30 games that season (he had also played in Dayton briefly the previous year, before I joined the organization). He left us with a batting average of .321, a slugging percentage of .598, and a won-loss record of 18-12. Over the next month, without Frazier, the Dragons would go 9-28. The team eventually received some reinforcements in the second half and made the playoffs, but FrazierÃ¢â‚¬â„¢s impact was clear.

While FrazierÃ¢â‚¬â„¢s time in Dayton was relatively brief, he was one of those people that you felt like you had known for years. I see him each year at RedsFest, and he never changes. Last month, the Reds caravan was scheduled for a stop at Fifth Third Field. As the Dragons media relations director, I was there to assist our media with any interviews. As I was talking to writer Jeff Gilbert of the DDN, I heard the elevator stop on our floor. Before I could turn, a familiar voice rang out. Ã¢â‚¬Å“How you doing, Nicks.Ã¢â‚¬Â Same guy except his tax bracket, seven years later.

Later that same morning, I asked Frazier if he remembered that warm April night at Fifth Third Field in 2008 when he belted the walk-off home run. Mind you, Frazier has been a few places since then. HeÃ¢â‚¬â„¢s played in the All-Star Game, nearly won the Home Run Derby, and now heÃ¢â‚¬â„¢s a finalist for Ã¢â‚¬Å“the face of baseball.Ã¢â‚¬Â That was a long time ago, and I wondered if Frazier had any recollection of that game, so I asked the question.

Ã¢â‚¬Å“That was actually the second homer I hit in that game,Ã¢â‚¬Â he deadpanned. He remembered it better than I did.

In 2009, the Dragons hosted an event we called the Reds Futures Game at Fifth Third Field. It was a game that matched the current Reds team against a collection of the organizationÃ¢â‚¬â„¢s top prospects, including Frazier. The Reds were handling the broadcast, and as the game ended, I approached Frazier as he walked off the field in front of another sell-out crowd in Dayton.Ã‚Â  Before I could speak, he said to me, Ã¢â‚¬Å“if they would pay me a million dollars a year, I would stay here and play in this city for the rest of my career.Ã¢â‚¬Â

Mr. Frazier, we appreciate the thought, but that would have been a very bad economic decision for you.

Yes, if I ever put together the kind of list that Marty spoke of, identifying my 10 favorite players of all time, there would be a spot that I can say would be spoken for. 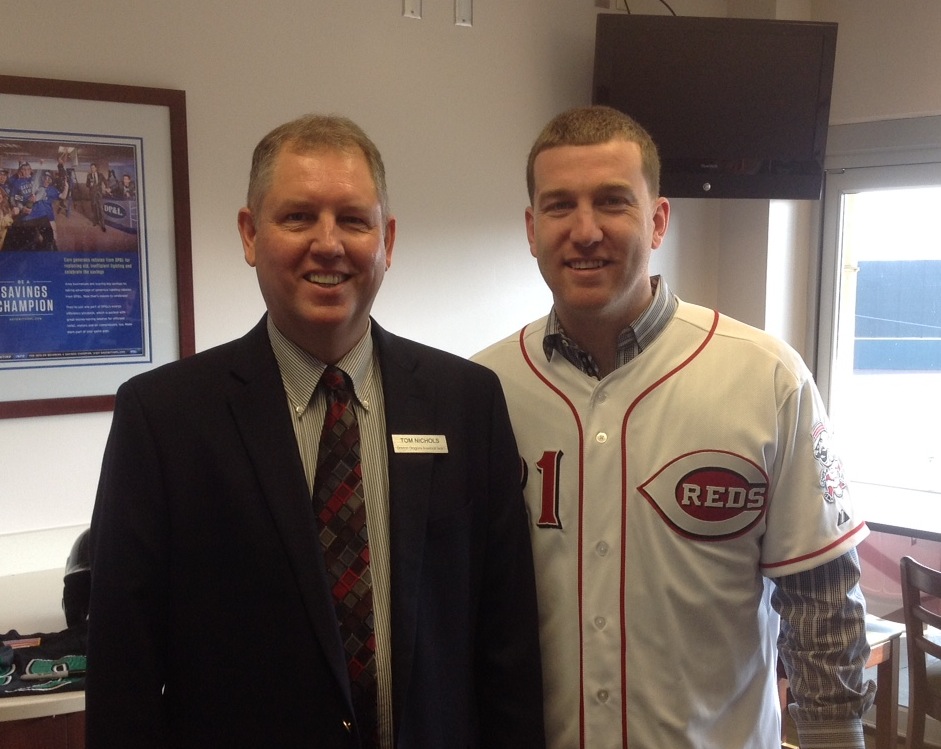