Even as recently as 2008, the average major league hitter slashed .268/.338/.424. The average hitter in 2014 slashed .255/.318/393. Those numbers disregard pitcher at bats. The difference between the two slash lines is quite significant. Hitting is hard, but it has seemingly never been harder in the modern era than it is now.

We can attribute the decline in runs over the past decade to many different factors, but one factor may give pitchers an advantage over batters on every single pitch: the expansion of the strike zone.

The current strike zone Ã¢â‚¬Å“ruleÃ¢â‚¬Â is as follows: 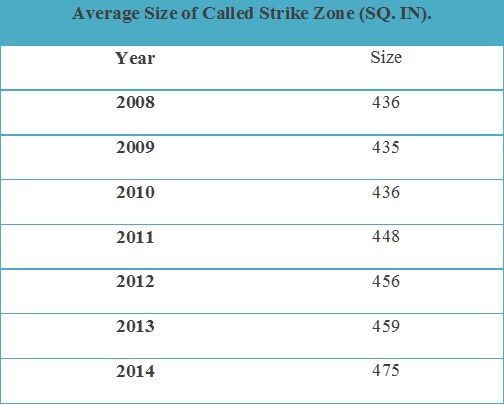 Courtesy of the Hardball Times

Wow. Since 2008, pitchers have gained 39 square inches of extra strike zone with which to work. The bottom of the zone seems to have expanded the most. Fangraphs recently posted an article showing the drastic increase in called strikes at the bottom of the strike zone (and slightly below) the last several years. This zone is indicated in the graphic below. 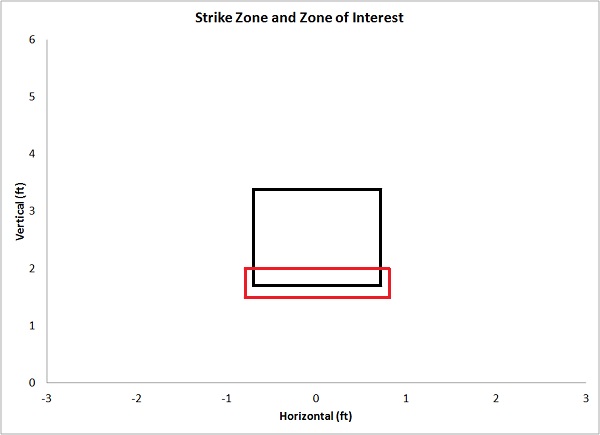 The following list shows the percentages of called strikes within this area during the last seven years:

Umpires used to call this zone a strike less than half the time. They now call it a strike just over three fourths of the time. This change has led to a higher percentage of strikeouts and a smaller percentage of walks throughout the league. In 2008, the major league walk rate (BB%) was 8.9% and the strikeout rate was 17.0%. In 2014, those numbers were 7.8% and 19.9% respectively. The difference between those numbersÃ‚Â may not seem substantial, but the large sample size is deceiving.

The called strikes also have another effect: hitters are swinging at more pitches that are difficult to drive because pitches at the bottom of the zone are now called strikes. These swings produce less loud contact and may contribute to the downturn in slugging percentage since 2008. Batters swing at pitches down in the zone and below about 4% more often than they did in 2008. Batters traditionally have trouble driving the ball in this part of the zone, which is why pitching coaching preach the merits of Ã¢â‚¬Å“keeping the ball down.Ã¢â‚¬Â

What is the role of the expanding strike zone on the declining run environment? That is difficult to quantify,Ã‚Â but some statisticians have tried. People who understand mathematics much better than me at the Hardball Times suggest that more strikes and less balls equals less runs scored, which makes sense.

They took the number of balls and strikes from the three regions where the strike zone has changed the most: the outer edge of the plate for right-handed and left-handed hitters as well as the bottom of the zone for all hitters. In our timeline from 2008 until now, we see a drastic decrease in the expected runs scored based on the number of strikes and balls called during the season in these regions.

Courtesy of the Hardball Times

Brian Mills, a professor at the University of Florida, wrote an academic paper examining the performance of umpires. He estimates that the expanded strike zone has accounted for somewhere between 24% and 41% of the decline in run environment between 2007 and 2013. Even on the lower end of the scale, that is staggering.

Strike zone expansion isnÃ¢â‚¬â„¢t the only reason that run scoring has decreased in recent years, but it is one of the fixable causes. If Major League Baseball wants to increase run scoring, they should find ways to coral the strike zone overgrowth that continues to further handicap batters each season.

This improvement may coincide with the installation of QuesTec cameras. The biggest jump in called strikes in the last twenty years came between the 2002 and 2003 seasons as cameras were installed in many ballparks. To address the issue, Major League Baseball needs to adjust the strike zone itself.

And they appear to be considering just that for 2016.Ã‚Â Umpires and players will undoubtedly need some time to adjust to new rules, and it could cause controversy early on in the transition. But the league seems determined to increase run scoring and a smaller strike zone will likely lead to more runs in the short and long term.

The strike zone has expanded and contractedÃ‚Â (this link is fascinating)Ã‚Â in the rule book throughout baseball’s long history. Ironically, the last change in 1996 expanded the bottom of the strike zone, the exact part of the zone that has caused the most controversy.

We canÃ¢â‚¬â„¢t pinpoint the exact impact of the expanding strike zone on the declining run environment, but we can safely say that it is significant. Modern day pitchers are bigger, stronger, and better than ever. They donÃ¢â‚¬â„¢t need any extra advantages to succeed. If Major League Baseball doesnÃ¢â‚¬â„¢t take action to slow the growth of the strike zone, the run environment may not have hit rock bottom.