Bailey, who is coming off of surgery to repair a torn flexor mass, said things are going well but that he is still a little behind from his usual schedule.Ã‚Â Ã¢â‚¬Å“I havenÃ¢â‚¬â„¢t gotten off the mound,Ã¢â‚¬Â Bailey said. Ã¢â‚¬Å“Usually, l like to get off the mound a few times before I come. But I can catch back up real quick. ItÃ¢â‚¬â„¢s more getting used to the throwing everyday stuff.Ã¢â‚¬ÂÃ‚Â Bailey noted that he has not had any setbacks to this point.

It sure would be nice to have the Homer Bailey back that pitched for the Reds from June on last year (ERA 2.66). Bailey’s season overall was mix of good and bad, but there were important positive indicators. His fastball velocity was up over 2013, his fly ball rate fell from 34 to 29 percent, and his swinging-strike rate was higher, despite nagging injuries all year.

Item #2: You’ll have plenty of opportunity to judge the Reds’ progress in Goodyear yourself. C. Trent Rosecrans reports the excellent news that several of the Reds games will be shown on TV – seven live and eight others on delay.

Item #3: One bit of bad news. John Fay reports that relief pitcher Sean Marshall suffered a slight setback in his rehab from shoulder surgery last June. He has been rehabbing all offseason but felt soreness a couple weeks ago during a long toss session.

Marshall was moving along pretty well from his June 24 shoulder surgery. And then . . .“Two weeks ago, I was doing three sets of long-tossing from 120 feet, feeling pretty good. But I kind of had a little soreness in my shoulder. I got out here (to Arizona) Feb. 6. I had to slow down a bit. I’m not on the mound yet.Ã‚Â Hopefully, I’ll resume pretty quick and finish that long-toss session of the rehab, then throw on some flat ground and be on the mound soon.”

Item #4: And Twitter has this message from Sam LeCure: 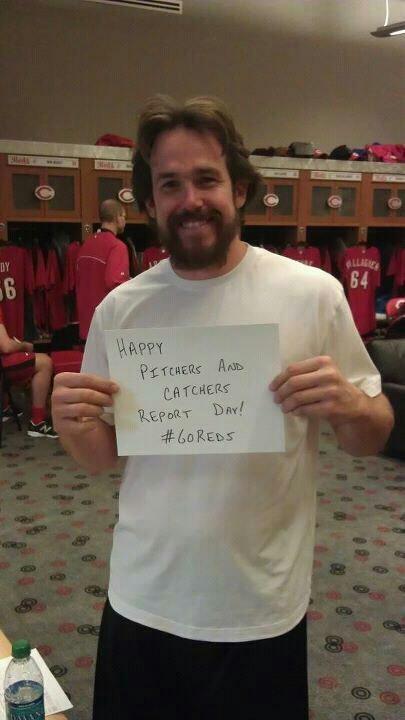