[This is part of Redleg Nation’s ongoing series on the changing run environment in baseball. For an introduction to the series check out Feeling Run Down.]

A lot of attention has been paid to defensive shifts over the last year, and with good reason; the game can look pretty weird these days. Some teams shifted three of their infielders to one side of second base more than a thousand times last year, and as ESPN noted, the use of infield shifts has gone up more than sevenfold just since 2011. The once predictable infield is running all over the place these days.

At the same time, offense is down all over the league. Teams averaged just 659 runs last year, down from 744 in 2005, and 710 in 2010. ThatÃ¢â‚¬â„¢s a big enough change to also make the game look pretty different. Losing 100 runs in a season may not sound like a ton because itÃ¢â‚¬â„¢s less than one per game, but it means more shutouts, a lot more low scoring games, and a lot fewer big blowouts. 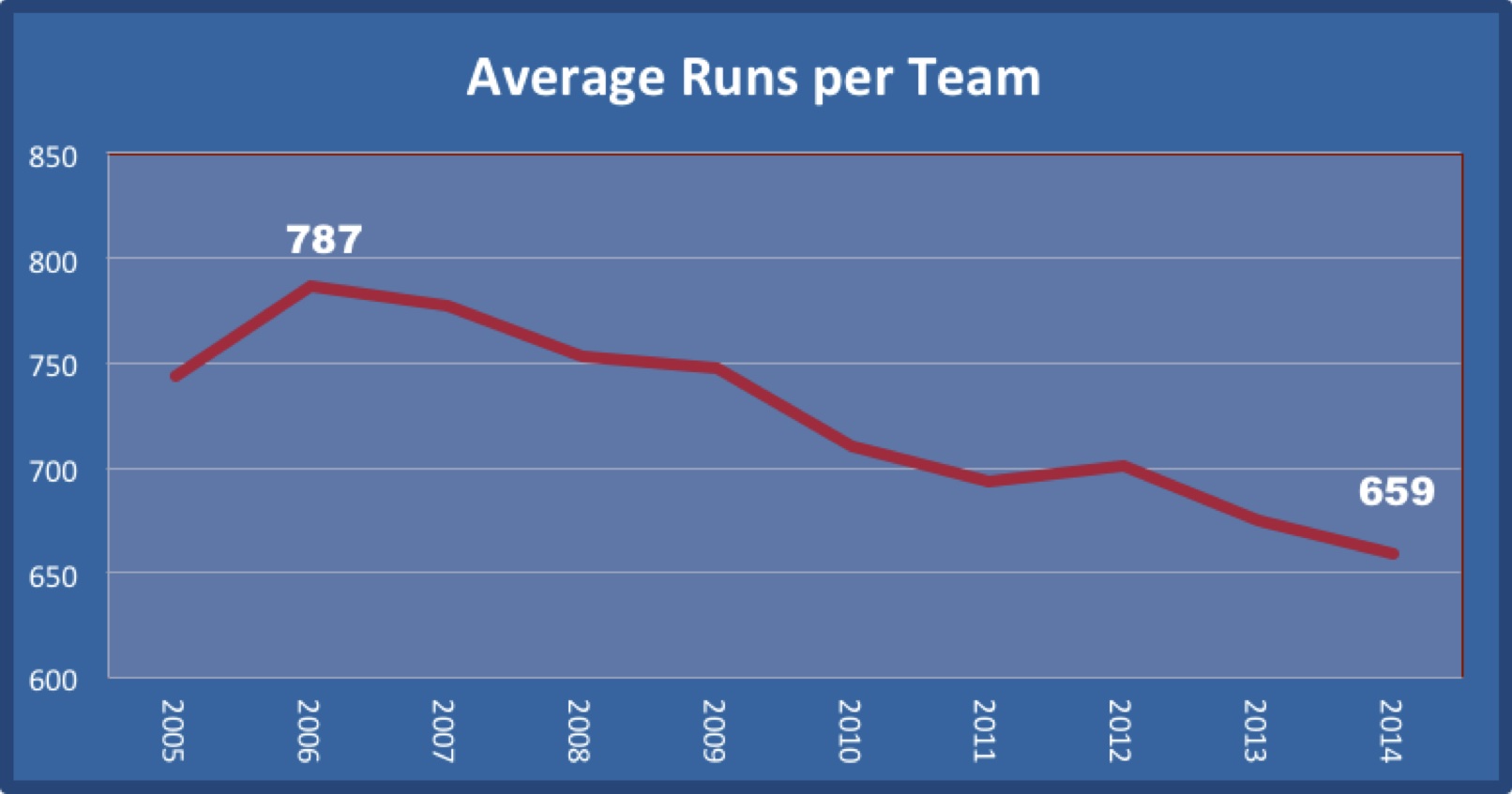 So some people, including the new commissioner Bob Manfred, have been putting two and two together and thinking that maybe all these shifts have been cutting into scoring. Manfred has even gone so far as to suggest that MLB might consider banning the use of infield shifts, creating some kind of Ã¢â‚¬Å“illegal defenseÃ¢â‚¬Â in baseball. When I first heard that I thought it was crazytalk, but itÃ¢â‚¬â„¢s not like baseball hasnÃ¢â‚¬â„¢t taken some extreme measures to promote offense before (lowering the mound), and we know the powers that be want to see the scoring come back.

But would banning the shift really get the runs back? WeÃ¢â‚¬â„¢re talking about singles here and hitters arenÃ¢â‚¬â„¢t doing most of their damage with grounders on the pull-side. I decided to take a look and see, are shifts killing offense? The answer it turns out was a lot less complicated than I thought: No.

Ok, IÃ¢â‚¬â„¢ll unpack that a little. When you boil it all down, there are really only four things that you need to look at when youÃ¢â‚¬â„¢re thinking about scoring runs at the macro level like this. Walks (BB%), Strikeouts (K%), Power (ISO), and Batting Average on Balls in Play (BABIP). Of the four, the shift only really affects one those, BABIP. If youÃ¢â‚¬â„¢re assuming the shift is working to take away offense, youÃ¢â‚¬â„¢re assuming that the ball has already been put into play and that it turned into an out instead of a hit. The chart below shows the changes in those four numbers league-wide over the last ten years. 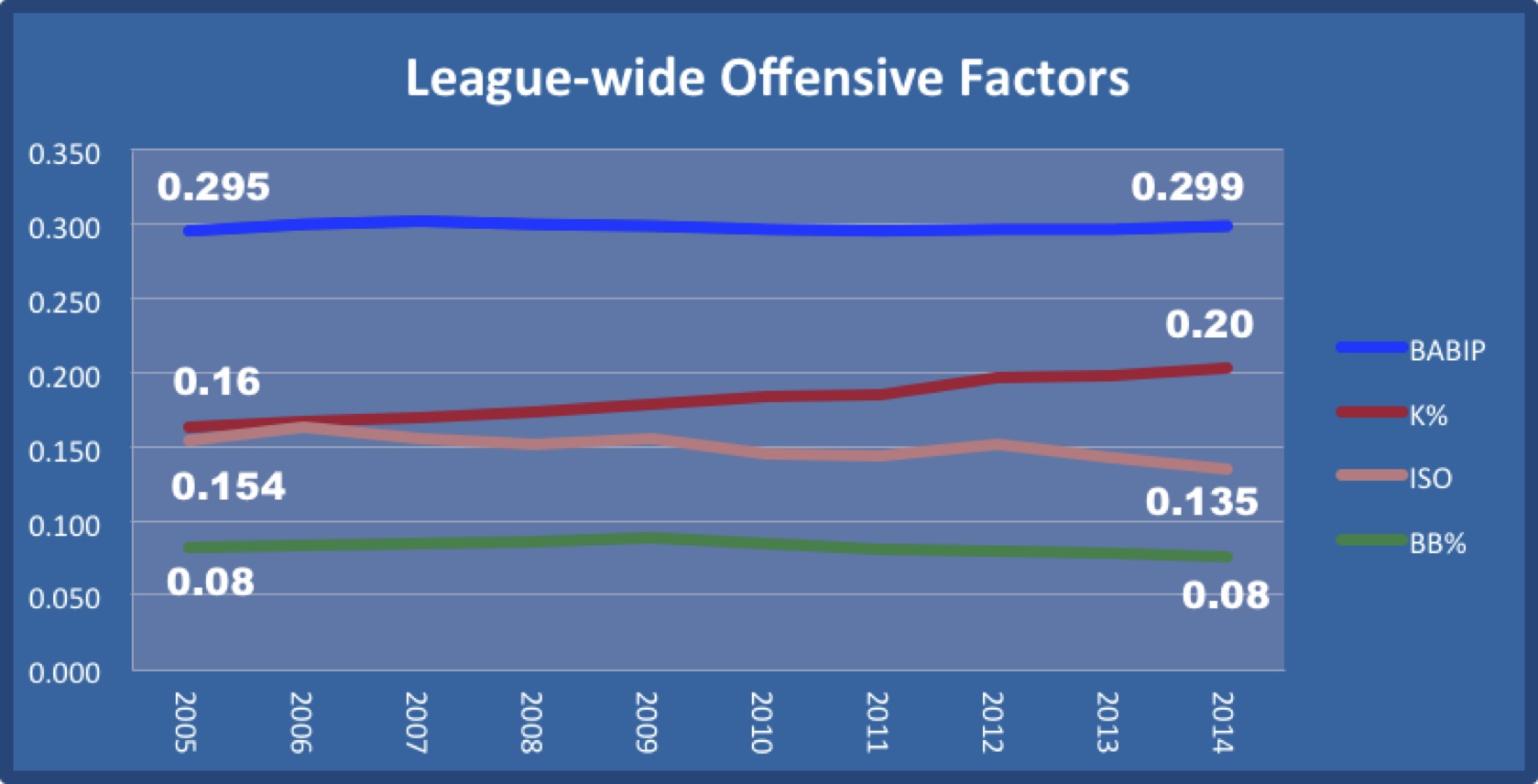 BABIP is actually slightly higher than where it was in 2005, and has been going up (very slightly) through the years where teams have been increasing their use of shifts and scoring has taken a nose dive. During that time, Ks are up a bunch, and power is down a bunch, both reasons that scoring has dropped off. But BABIP? Not down, actually up. And thus, itÃ¢â‚¬â„¢s safe to say that defensive shifts just arenÃ¢â‚¬â„¢t the reason for the league-wide drop in offense. The only way that shifts can affect play is by decreasing BABIP (unless youÃ¢â‚¬â„¢re getting into the mental side, getting into a hitterÃ¢â‚¬â„¢s head, but thatÃ¢â‚¬â„¢s not what people like the comish have been talking about) and BABIP has gone up.

Is it possible that all this shifting is actually helping teams score more runs? I didnÃ¢â‚¬â„¢t think that passed the eyeball test and looked a little deeper. In 2013, team BABIP with the shift on was .287 and with no shift was .301. Fangraphs looked at the 44 players that hit against the shift at least 100 times in 2014 and found that their BABIP against the shift was .281 and with no shift their BABIP was .291. (The list included Jay Bruce, who hit 189 balls into the shift in 2014 and had a batting average of .286 while doing so, compared to his .216 BABIP with no shift. Ah the joys of small sample sizes.) So it definitely looks like the shift is doing what you would expect it to when itÃ¢â‚¬â„¢s on, i.e. turn some batted balls into outs that would have been hits.

So hereÃ¢â‚¬â„¢s my conclusion: as much as the shift is changing how the game looks and weirding people out, itÃ¢â‚¬â„¢s just not happening enough to make any difference in overall league scoring. Last year there were about 184,000 plate appearances and the shift was deployed in less than 10% of them. When itÃ¢â‚¬â„¢s on, it probably lowers BABIP by about 10 points give or take, so last year there was maybe a 1 point effect on BABIP from shifting that was easily swamped by the random year-to-year variation. If teams start using the shift in say 50% of all plate appearances, then I would expect to see a noticeable drop in league-wide BABIP, but again, that would only take away some singles, so even that probably wouldnÃ¢â‚¬â„¢t have a huge effect on overall scoring.

The shift is interesting, and it opens up a lot of new roads for teams to explore and new arguments for fans to have, but if MLB wants to get some offense back in the game, it definitely needs to look somewhere else.