With Rob Manfred taking over as MLB commissioner on January 25th, weÃ¢â‚¬â„¢ve seen a steady stream of news articles suggesting ways he can immediately improve the game. Some ideas involve limiting the amount of relief pitchers each manager can use in a single game, or forcing relievers to face more than one batterÃ¢â‚¬â€perhaps more than two batters. The logic is that these changes would quicken the game and produce more offense. I donÃ¢â‚¬â„¢t intend to debate whether or not MLB should implement these changes, but I can say the logic is sound. Obviously, fewer mid-inning pitching changes would accelerate the game, or at least eliminate some downtime. Though, ascertaining exactly why fewer relievers would amount to increased offense takes a little more research.

The basic premise is that runs have declined because managers are using more relievers to take advantage of handedness matchups, and because relievers are better than theyÃ¢â‚¬â„¢ve ever been. A quick search of fangraphs.com reveals that mangers are going to their bullpen more often. In the 1990 season, relievers made 8483 appearances. That number has increased steadily to 14,459 in 2014. The number of innings thrown by relievers has increased from around 12,000 in 1990 to between 14,000 and 15,000 the last few years. ItÃ¢â‚¬â„¢s also evident from those numbers that the average length of a relief outing has decreased.

According to Patrick OKennedy of blessyouboys.com, the average number of relievers used by both teams in an MLB game was 6 in 2014, up from 2.8 in 1974. (Not surprisingly, games are lasting significantly longer than they did in 1970 as well.)

Ken Rosenthal points out that in 2013 and 2014, and presumably farther back than that, the average runs scored per half inning were lowest in the 7th through 9th innings. Rosenthal also says that relievers faced just one batter 8.7% of the time in the last five years, and they faced two or fewer batters in 16.4% of their appearances. So as you knowÃ‚Â if youÃ¢â‚¬â„¢ve been watching baseball regularly the past few years, left-handed and right-handed specialists makeÃ‚Â frequent appearances.

Matt Eddy at Baseball America examinesÃ‚Â trends in bullpen specialization, with a particular emphasis on the success that left-handed pitchers have against lefty batters. Ã‚Â He shows that between 2011 and 2013 (and the trend continued in 2014) AVG and OBP were 30 points lower, SLG was 70 points lower and OPS was 100 points lower for lefty batters against LHPÃ‚Â than against RHP. Right-handed hitters also faired significantly worse against RHPÃ‚Â than they did against LHP.

Eddy talks about a shift in managers’ priorities over the last 20 years or so. In the past, managers tried to gain platoon advantages for their offense, having batters face opposite-handed pitchers 60% or more of the time. More recently, teams startedÃ‚Â keeping 12 pitchers, and managers started seekingÃ‚Â platoon advantages for their pitching and defense, so batters nowÃ‚Â faceÃ‚Â opposite-handed pitchers 55% or less of the time.

In the second partÃ‚Â of his article, Eddy goes on to say that plate appearances by all batters against LHP have increased steadily from 24.5% in 2002 to 28.5% in 2013, and leftyÃ‚Â vs. lefty match-ups have gone from 6.8% to 8.6% of PA in that time. More left-handed relievers are making the majors based solely on their ability to retire left-handed batters, and teams encourage someÃ‚Â LHPÃ‚Â to find ways to improve their performance against left-handed batters, even if it diminishes their effectiveness against right-handed batters.

Some of the most telling data IÃ¢â‚¬â„¢ve found is in this article by Jonah Keri and Neil Paine on fivethirtyeight.com. They have a graph to show that 50 years ago, on average, about 1.5 relievers were used to pitch 2.5 relief innings per game. In 50 years, the average number of relief innings pitched per game has only increased to about 3, but the number of relievers used per game has doubled to around 3. This is similar information to what I found on fangraphs.com about the growing number of relief appearances. Keri and Paine also show that the number of relievers throwing 95 mph or above has nearly quadrupled in the last 10 years, from about 3% of relievers to around 12%. Their last graph, IÃ¢â‚¬â„¢m going to steal and put on our page. 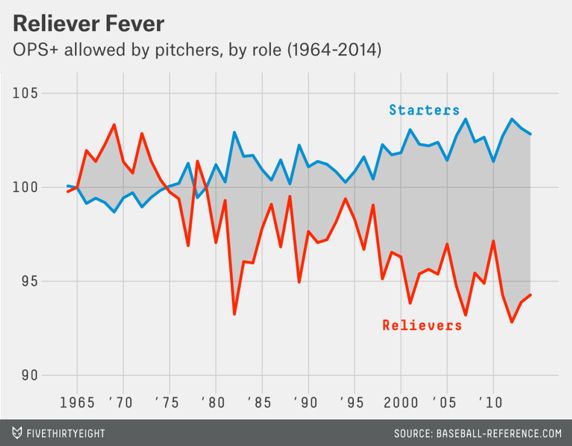 Let’s look a bit more at the assertion that relievers are better than they’ve ever been. The strikeout rate has been rising for years (K/9 by relievers has increased from 7.30 to 8.46 in the last 10 years), but Dave Cameron questions whether that is directly correlated to an increase in fastball velocity. RelieversÃ¢â‚¬â„¢ fastball velocity (FBv) has gone from 90.6 mph in 2002 to 92.5 in 2014. Cameron looks at the strikeout data by month and shows that batters typically strike out just as much in April when fastballs are slower, possibly discrediting the idea that faster fastballs lead to higher strikeouts. But, relievers are also throwing their sliders, curveballs and changeups significantly faster, which could have an impact on strikeouts. Furthermore,Ã‚Â relievers have gone from throwing cut fastballs .5% of the time to 5.7% in the last ten years. It isnÃ¢â‚¬â„¢t just Mariano Rivera getting people out with the cutter anymore.

This USA Today article from July 2014 discusses the effectiveness of the cutter, as well as the difficulty in recognizing itÃ¢â‚¬â€not just for batters. Mark Melancon, the PiratesÃ¢â‚¬â„¢ closer, says he throws a cutter 85% percent of the time, but fangraphs.com only has him down as throwing it 48% of the time. So, itÃ¢â‚¬â„¢s possible that pitchers are throwing the cutter far more than the stats say. Jeff Sullivan arguedÃ‚Â last year that, with Rivera retired fromÃ‚Â the game, Kenley Jansen’s cutter was the new most dominant pitch in baseball–edging out Aroldis Chapman’s fastball.

However, starters have gone from throwing the cut fastball 1.3% of the time in 2004 to 6.4% in 2014, so there’s no current evidence that relievers are getting more people out with cutters than starters are. Still, there are injury risks associated with the cut fastballÃ¢â‚¬â€apparently the Orioles and AÃ¢â‚¬â„¢s discourage their young pitchers from throwing it–so in the future it could evolve intoÃ‚Â a pitch better suited for relievers that don’t throw as many pitches and don’t need as wide of a pitch repertoire.

Relief pitchers today are throwing the ball harder, theyÃ¢â‚¬â„¢re striking more batters out, theyÃ¢â‚¬â„¢re more likely to be facing a same-handed hitter, and they may only be charged with retiring one or two batters. Therefore, relieversÃ¢â‚¬â„¢ overall success rate is higher and fewer runs are being scored in the later innings of games.