Improvements have been few and far between this offseason, but this first week of February has had about as much activity as weÃ¢â‚¬â„¢ve seen from the RedsÃ¢â‚¬â„¢ front office since the Mat Latos and Alfredo Simon trades. Minor league deals have been doled out to Paul Maholm and Kevin Gregg, but Saturday also brought us righty reliever Burke Badenhop on a major league deal.

BadenhopÃ¢â‚¬â„¢s first year is cheap at $1 million with incentives kicking in for racking up 45, 50, and 55 appearances. Following that is a choice for the Reds between a $1.5MM buyout and a $4MM mutual option. So, the Reds got a righty arm for the bullpen at either one year/$2.5MM or two years/$5MM, but how good of an asset did they just bring into the fold?

A full-time reliever since 2010, Badenhop relies on inducing ground balls to be effective. With a low three-quarters arm angle (his delivery may prompt flashbacks of Bronson Arroyo minus the exaggerated leg kick), he adds a little more sinking action on his breaking pitches, of which he has three. BadenhopÃ¢â‚¬â„¢s sinker is his Number One; he threw it 71.4% of the time in 2014 and has thrown it 1500 more times than all of his other pitches combined since 2011 (2712 to 1127, according to Texas Leaguers). With its pronounced arm-side run, BadenhopÃ¢â‚¬â„¢s sinker can be employed similar to a two-seamer that clocks in at 89 MPH on average.

Because of that, BadenhopÃ¢â‚¬â„¢s sinker catches hitter off-guard when paired with his other two primary offerings, his slider and splitter/changeup (more on that later). This pitch has induced the lowest swing rate of all his pitches at 39%. Though Badenhop has never been much of strikeout pitcherÃ¢â‚¬â€his career K/9 is 6.34, but he posted a meager 5.09 last year for BostonÃ¢â‚¬â€he can use this pitch to get out of tough jams if he can locate it well. 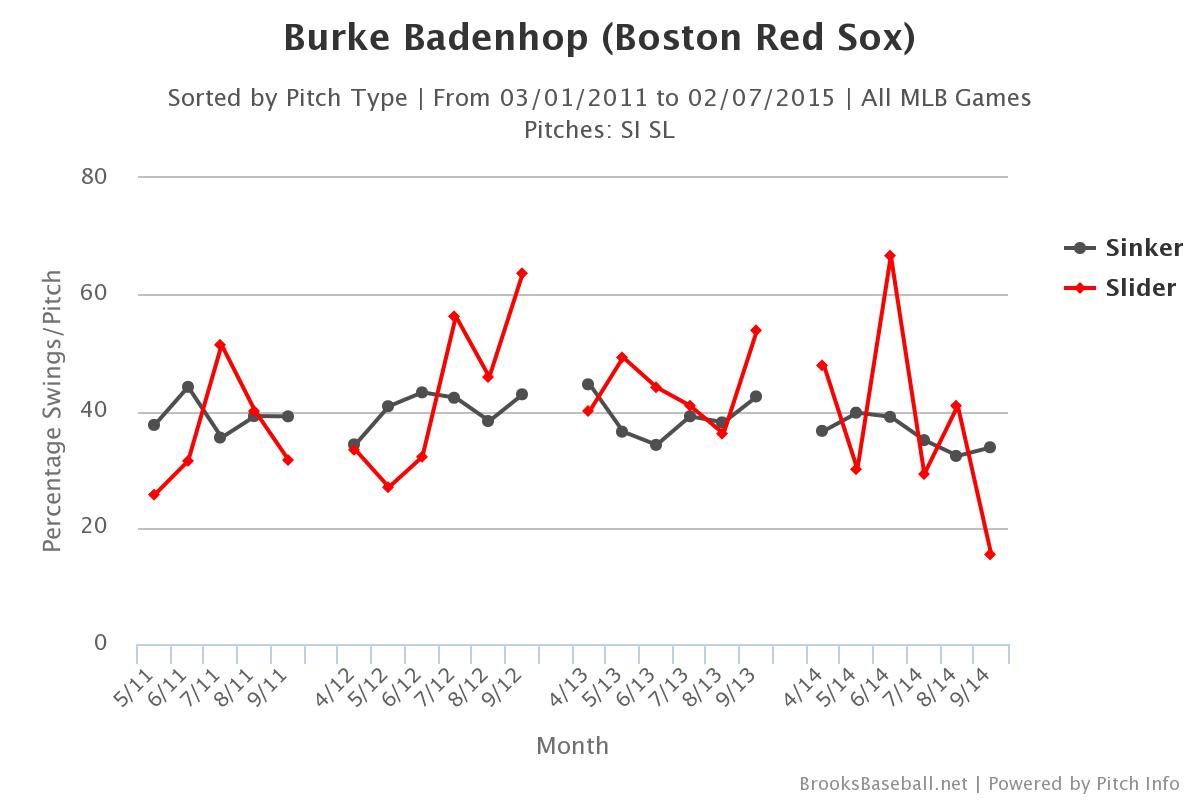 And that sums up Burke Badenhop as well as anything: if he can locate it well. Badenhop does not miss bats very often when heÃ¢â‚¬â„¢s pitching. His sinker from 2011 to present has only generated a whiff/swing rate of 2.5% (and though whiff rates on sinkers are lower than most pitches league-wide, the average is around 12%). Perhaps of more concern for the future is the overall trend on his whiff rate; after managing 11% whiff/swing on pitches in the strike zone in 2011 itÃ¢â‚¬â„¢s gone down each season hence, bottoming out last year at 5.64%. Granted he’s become more of a groundball pitcher over time, thus he’s pitching to contact more, but that declining rate puts even more pressure on his command and requires hitters to chase some pitches. 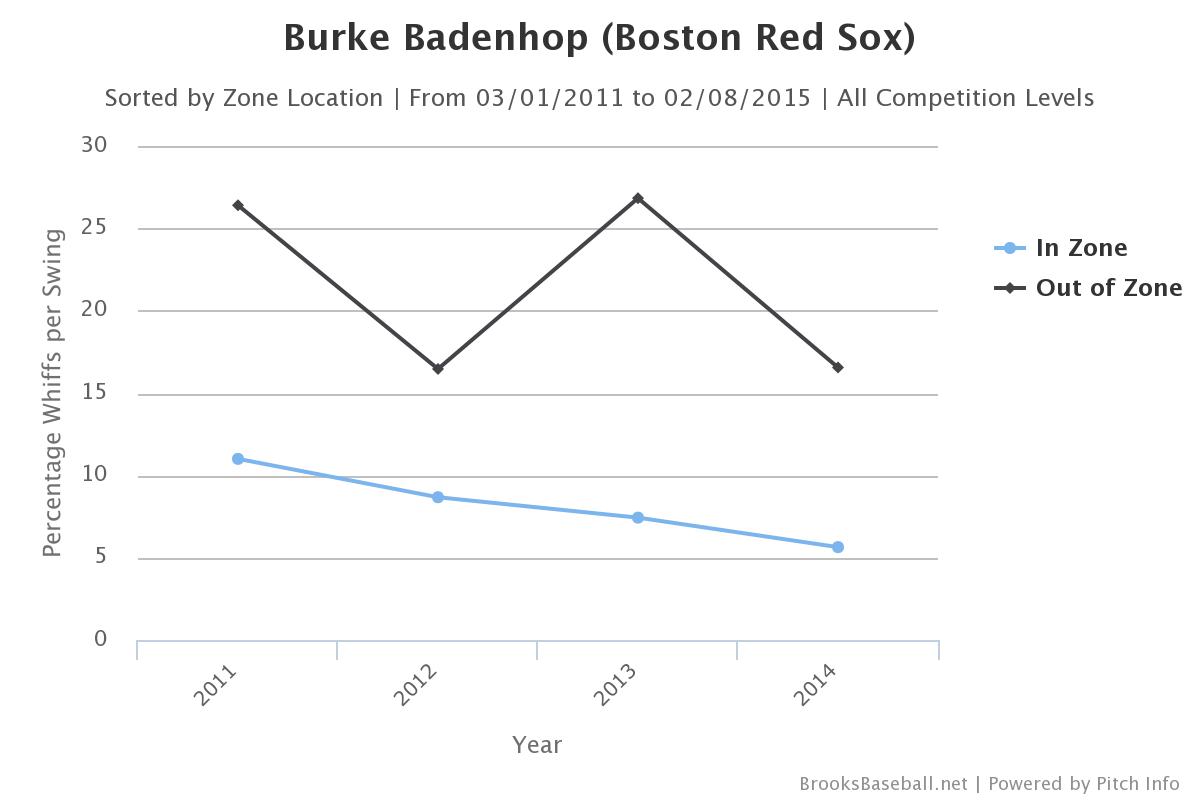 However, as shown in the first graph, his slider can generate a few more swings and itÃ¢â‚¬â„¢s no coincidence that he kept a pretty high whiff rate on it in his most effective season (2013, when he posted a career-best 1.19 WHIP and 3.5 K/BB in 62.1 innings). HeÃ¢â‚¬â„¢s thrown just over 53% of his sliders for strikes since 2011, so his use of the pitch is largely predicated on getting the hitter to swing at it. Locating the slider in the strike zone isnÃ¢â‚¬â„¢t terribly important if heÃ¢â‚¬â„¢s able to bend his sinker in for strikes. 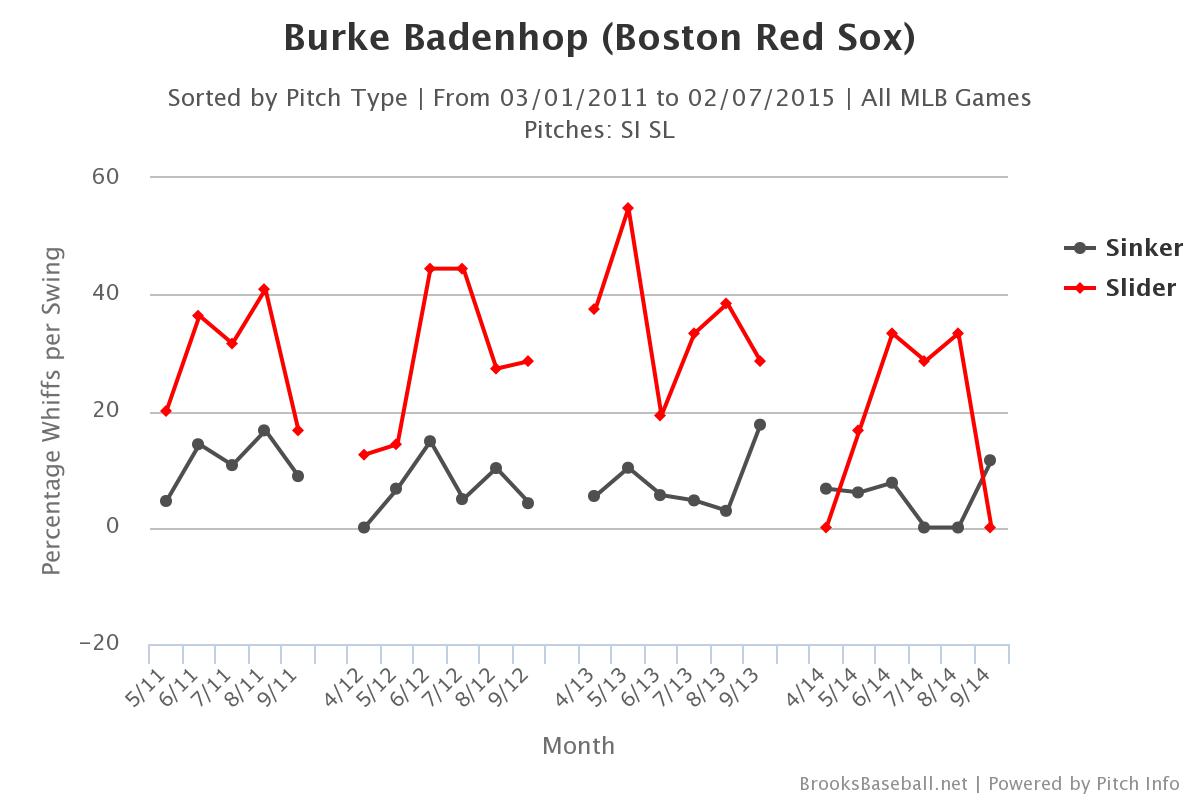 His third pitch has been classified as a split-finger fastball by Fangraphs and Texas Leaguers, but Brooks Baseball calls it a changeup. It makes sense either wayÃ¢â‚¬â€it averages just over 83 MPH, has a little more pronounced sink than his sinker but also just a shade of arm-side run, and generates more swings and misses when played off of his primary pitches. As for any usage of a four-seam fastball, Badenhop has only throw ten in the last four years (15 according to Brooks Baseball).

All of this together paints a pretty clear picture of what BadenhopÃ¢â‚¬â„¢s plan is each time he takes the mound: Keep the ball down, try to use a hitterÃ¢â‚¬â„¢s aggressiveness against him, and pitch to induce weak contactÃ¢â‚¬â€ideally weak ground balls. In 2014, Badenhop was effective in that game plan, with 61% of batted balls resulting in grounders while maintaining a line drive rate just below 20%.

So if that’s how Badenhop pitches, what does he actually provide the 2015 Reds? Really, his WHIP and FIP track record make him a solid addition to the Cincinnati bullpen with no question. Comparing his FIP to the other primary righties who were in the 2014 bullpen, Badenhop has been more consistently below 4.00 than anyone other than Jonathan Broxton (and that was the Broxton of six to eight years ago). As for WHIP, BadenhopÃ¢â‚¬â„¢s had a better rate than all but 2012-2013 J.J. Hoover and 2014 Broxton since the start of the 2012 season. 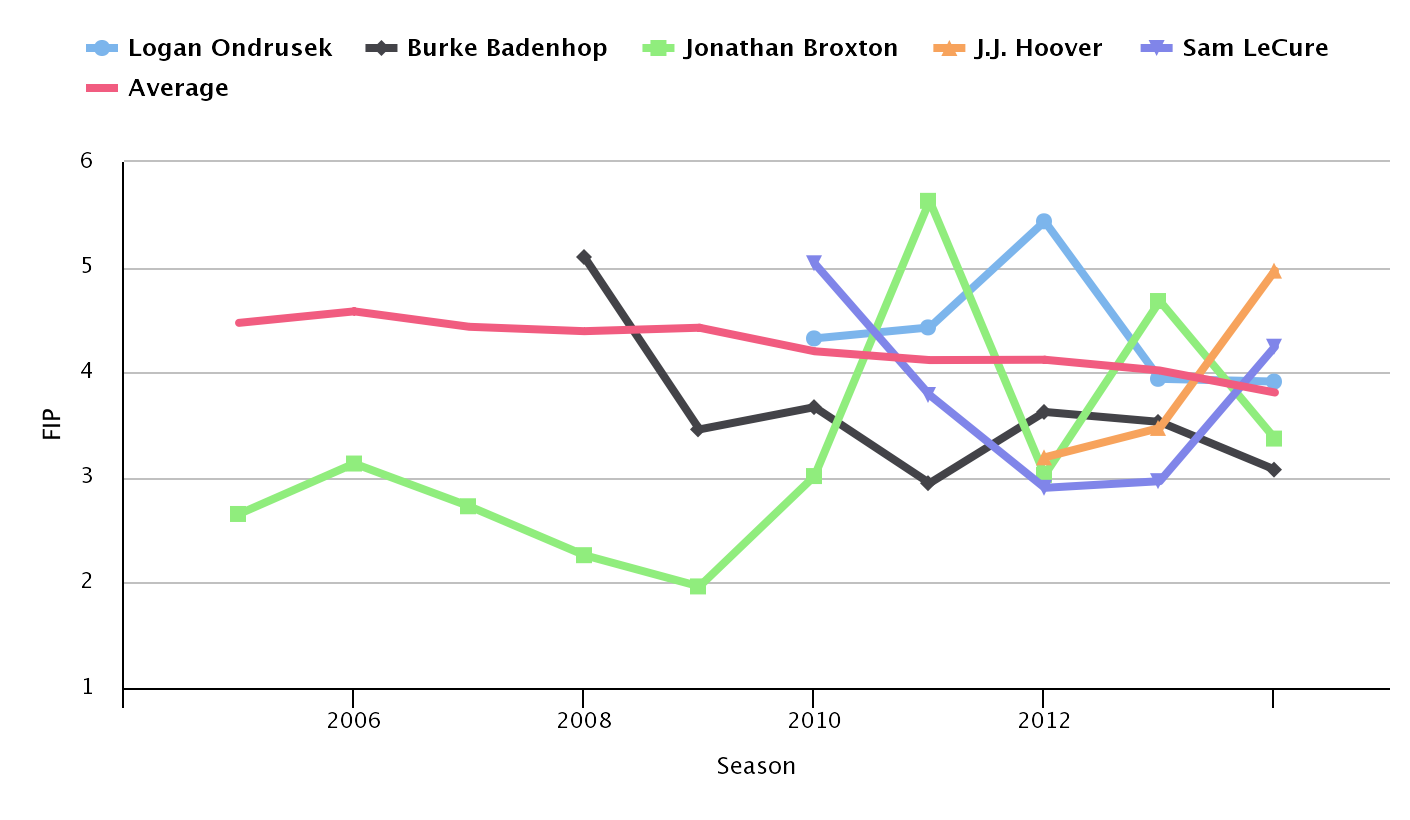 Of course, past performance doesnÃ¢â‚¬â„¢t necessarily mean future success. Badenhop will be under more pressure to keep the ball down than ever while pitching in Great American, but should he successfully do so heÃ¢â‚¬â„¢ll likely slot behind Sam LeCure in the bullpen pecking order. HeÃ¢â‚¬â„¢s going to give up a fair share of singles just by virtue of giving up grounders (and a career 1.30 WHIP that implies he isnÃ¢â‚¬â„¢t the best to come into the game and get out of a runner-in-scoring-position jam), but infield defense is one of CincinnatiÃ¢â‚¬â„¢s best traits. ItÃ¢â‚¬â„¢s quite possible Burke Badenhop reaches all three of his innings incentives this season and makes that option for 2016 sound somewhat reasonable.