Search
Home
This Week in Baseball 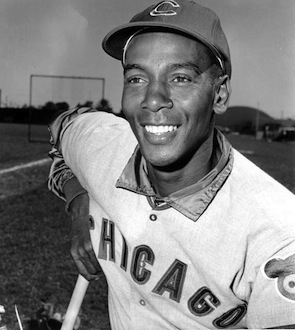 At age 30, Max Scherzer will step on the mound in April and gross around $700,000 for the first of his 30 or so starts. At age 30, in 1961, Ernie Banks ran onto the field and collected around $400 for his first game of the season – or half that had baseball’s schedulers fulfilled his request to “play two.” But I’m pretty sure Ernie enjoyed that game as much or more than any other player on the field, then and now.

I’ve been a baseball fan since birth – Dad was and is a Reds fan and imbued that in me at a very early age. It was a two hour drive on two-lane roads to get to Crosley Field from our house so game day was a once-a-season event, if that. And it was almost always against the Dodgers or Giants, the two teams my dad hated. And most of the summer, we listened to games on the radio as TV broadcasts were few and far between. So I can’t tell any tales about seeing Mr. Cub actually play, in person or on the tube.

Ernie Banks’ story is similar to a lot of African American players of his era. Banks grew up in Dallas, more interested in swimming and basketball than baseball. In fact, Booker T. Washington High School didn’t have a baseball team when he was there. He played fast pitch softball for a church team when discovered by a scout for the Kansas City Monarchs in the Negro League. Banks signed to play for the Monarchs in 1950 and played for KC before and after his time in the US Army.

In 1952, the Cubs made Ernie Banks the first Black player to don their uni. Banks went on to become an 11-time All Star and Hall of Famer (a candidate for “best player to never win a ring”). How good was he? In 1960, the Associated Press reported that the Milwaukee Braves, about to play in the Series that year, were prepared to send pitchers Joey Jay, Carlton Willey, and Don Nottebart, outfielder Billy Bruton, shortstop Johnny Logan,Ã‚Â first baseman Frank Torre AND cash to the Cubs for Banks.

Many peopleÃ‚Â will focus on his career, stats and home run totals. But for me, Ernie Banks represents everything that is good about baseball. I loved watching him run onto the field before an All Star game or a Cubs Saturday broadcast on WGN, with a smile as big as his face. His positive attitude towards not just baseball but life in general, has had a lasting and permanent effect on me, personally, and my approach to life.

While Jackie Robinson is portrayed as silent but angry, Ernie Banks was the happy-to-be-playing-the-game smiling player with no ill will toward anyone. He told a biographer once “Some people feel that because you are black you will never be treated fairly, and that you should voice your opinions, be militant about them. I don’t feel this way. You can’t convince a fool against his will… If a man doesn’t like me because I’m black, that’s fine. I’ll just go elsewhere, but I’m not going to let him change my life.” (Northsiders: Essays on the History and Culture of the Chicago CubsÃ‚Â edited by Gerald C. Wood, Andrew Hazucha)

After he retired, Banks served as the unofficial Cubs ambassador. When the Chicago Tribune bought the team, they tried to sever ties with Banks calling him “the crazy uncle who just showsÃ‚Â up uninvited.” They asked him back quickly, and throughout that time, Banks never badmouthed the company or the team.

Ernie BanksÃ‚Â received the Presidential Medal of Freedom in 2013 (from a White Sox fan!). He told the story of a horrible day at Wrigley Field. “It was a very bad day in Chicago,” Banks said. “I came into the locker room, and I was feeling great. And I said to all my teammates, ‘It’s a beautiful day — let’s play two!’ That was a time in my life that I was really excited about going to Wrigley Field.”

When I wake up everyday to produce a radio show, write a column for Redleg Nation, or tackle the 6 inches of snow on my sidewalk during another Toledo winter, I could whine and complain about how bad things are for me. But I decided years ago that a positive attitude comes from within … so when anyone asks what kinds of day it is, my answer is always “Fantastic.”

Wouldn’t it be great if every team in the Central Division rearranged their schedule when the Cubs were in town … and played two for Ernie? I’d be there.