LetÃ¢â‚¬â„¢s start with the Nasty Boys. While famous for their amazing name, Randy Myers, Rob Dibble and Norm Charlton are generally regarded as the core of a great bullpen. As such, one might expect them to serve as a model for how to deploy a relief corps. However, as I was gazing longingly at their gaudy numbers, what struck me was that their stats looked little like a modern bullpen. Observe their performance for 1990, the World Series championship season:

So if the Nasty Boys were a historically awesome bullpen, why donÃ¢â‚¬â„¢t more teams manage their relievers like this? Or, to take it back one step further and ask the real question: What is the best way to deploy a major league bullpen?

While thereÃ¢â‚¬â„¢s no single answer to that question, we should be able to agree that maximizing the number of high-leverage, game-on-the-line innings pitched by the most effective relievers is a good thing.

Sadly, as with many simple sounding solutions, this is actually a complicated idea to unpack. WeÃ¢â‚¬â„¢re faced with a double bottom line. Do you want to get the highest leverage innings for your best relievers, or the most innings possible? Both are important, but they tend to work in opposite directions. If you save your top relievers for the highest leverage situations, youÃ¢â‚¬â„¢re going to be reducing their innings. If you put your big boys in there as much as possible, they may be pitching when the game isnÃ¢â‚¬â„¢t on the line and not available later on when it is.

Fortunately, thereÃ¢â‚¬â„¢s a fairly effective way of just side stepping this problem from an analytical perspective, at least as a place to start the conversation. First, we need to introduce the concept of leverage and a Leverage Index. Leverage is a shorthand for important. A high-leverage appearance is based on the game situation: the inning, score, number of outs and runners on base. The Leverage Index statistic is designed so that 1.0 is considered a neutralÃ‚Â situation. Below 1.0 is a low-leverage situation and above 1.0 is high leverage. The index was developed by renowned nerd Tom Tango.

By multiplying a pitcherÃ¢â‚¬â„¢s innings by his average Leverage Index, we create a new concept: Leveraged Innings. This metric combines the two key qualities we want to see in the use of a reliever. There are several ways for a pitcher to earn Leveraged Innings. He might pitch 100 neutral innings or 50 high leverage innings. Either way, heÃ¢â‚¬â„¢d end up with the same 100 Leveraged Innings.

So, whether one manages for the highest leverage situations, or the most innings, the optimal strategy would be to maximize Leveraged Innings.

The Long Slow Slide Away from Good

I took a look back at the 1990 relief stats using Leveraged Innings and found that yes, the Nasty Boys were good. Both Myers and Dibble were in the top seven in the league in Leveraged Innings as shown below. The table also indicates that pitchers earned their Leveraged Innings in different ways. Greg Harris had a large number of innings at a lower leverage, while Bobby Thigpen had an insane Leverage Index.

My next stop, obviously, was to see how well Aroldis ChapmanÃ¢â‚¬â„¢s usage stacked up under Dusty Baker and Bryan Price. In 2012, Chapman racked up 132 Leveraged Innings, which is far below the heights that the Nasty Boys achieved, but actually pretty good. In 2013, BakerÃ¢â‚¬â„¢s last year, Chapman only had 113 Leveraged Innings. Last year under Bryan Price he only earned 91. Adjusting Chapman’s number forÃ‚Â the games he missed being on the DL would yield Leveraged Innings of 110 for 2014.

The figure below shows the average Leveraged Innings for the top 10 relievers each year from 1990 to 2014, excluding the strike season. (I averaged the top 10 to smooth out outliers.) 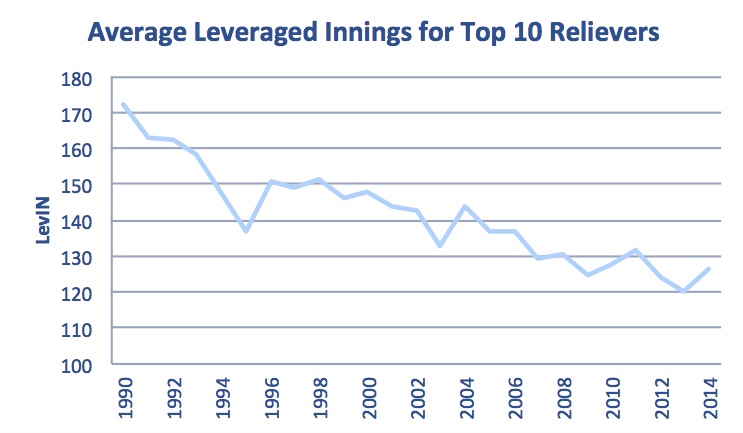 Problem, I Name Thee Save Rule

So what does it mean? In the end is this just another stat beating of the zombie closerhorse?

Yes. I wish it were something else, but the modern-day closer is the worst incarnation of an excellent relief pitcher imaginable. ItÃ¢â‚¬â„¢s hard not to point an accusing finger at the Save statistic. The Save statistic was adopted in 1969. Identifying a single pitcher as the team’s closer who will earn all the saves encourages reduced innings (the 9th inning is all you need for a save) and reduced leverage (only when your team is in the lead, and a 3-run lead still qualifies) for that pitcher.

I ran a few regressions (wonÃ¢â‚¬â„¢t bore you with the details) that indicate back in the early 90s, Leveraged Innings were more correlated with being good (ERA, FIP) than they were with saves, and now itÃ¢â‚¬â„¢s reversed. To put it simply, the move by managers to the modern day, save-based closer has reduced the overall number of Leverage Innings pitched by the teamÃ¢â‚¬â„¢s best pitchers. The determining factor for being assigned Leverage Innings now is how many saves you get, not how good you are. Organizations pay closers based on saves. Managers help their closers accumulate them.

The question needs to be begged and pleaded, when will an organization order their manager to go back to a Nastier model of using the pen?

If a team could get two pitchers the combined 330 Leveraged Innings that Dibble and Myers threw in 1990, it would be like gaining a free elite reliever compared to conventional usage patterns. ThereÃ¢â‚¬â„¢s a real opportunity for a courageous manager to take advantage of how badly everyone uses their best relievers right now. Unfortunately, it doesnÃ¢â‚¬â„¢t seem like Bryan Price is going to be the guy to do it.