A cold front has swept through the heart of Redleg NationÃ¢â‚¬â€not only that of subzero wind chills turning Cincinnati and the surrounding landscape into the background scenery of Doctor Zhivago, but also the chilling effect the Marlon Byrd acquisition has had on the RedsÃ¢â‚¬â„¢ fan base.

LetÃ¢â‚¬â„¢s bring up a topic that taps into the hope and warmth of springtime to offset both of these cold feelings: Who is going to step up in Spring Training to take the last two rotation spots after Johnny Cueto, Homer Bailey, and Mike Leake? A handful of names are in contention; some new, some familiar.

On the outskirts of the conversation linger David Holmberg, Dylan Axelrod and Daniel Corcino. Corcino seems, though, to have found greater efficacy in the bullpen and will likely be seen there if at all in Cincinnati this coming season. Axelrod is an emergency option, more likely destined for AAA with a decent repertoire that doesnÃ¢â‚¬â„¢t have quite enough velocity or life to be effective in the major leagues.

Holmberg pitched as effectively as the Hindenberg was non-combustible in his first two starts of 2014. But he finished with three straight quality starts, though two were facing a Brewers offense, which had completely fallen apart. Holmberg showed up at Redsfest looking fitter and trimmer, inspiring mild chatter that he could take a step forward. HeÃ¢â‚¬â„¢ll get a look in Spring Training without a doubt, but he seems firmly entrenched behind the three main contenders.

LetÃ¢â‚¬â„¢s look at those three in terms of their likely roles for at least the beginning of 2015:

CingraniÃ¢â‚¬â„¢s 2014 season was fraught with disappointment. He started the year with a gem against the Cardinals but struggled with control in his next three starts, allowing 11 walks in 15.1 innings, throwing 45% of his pitches for balls. He was erratic with his bread-and-butter, the fastball, while working on refining the command of his slider and changeup.

Cingrani would continue to play with his changeup a bit for the rest of the season, when he was healthy enough to pitch. He threw it 13.1% of the time (up from his 7.1% rate in 2013) for a total of 141 pitches, 25 more times than he threw it in all of 2013. It was and likely still is a work in progress; he struggled with throwing the changeup with substantially less speed than his fastballÃ¢â‚¬â€with the average velocity lingering just above 86 MPHÃ¢â‚¬â€and with getting batters to swing and miss at it down in the zone as they only whiffed on it 13% of the time. 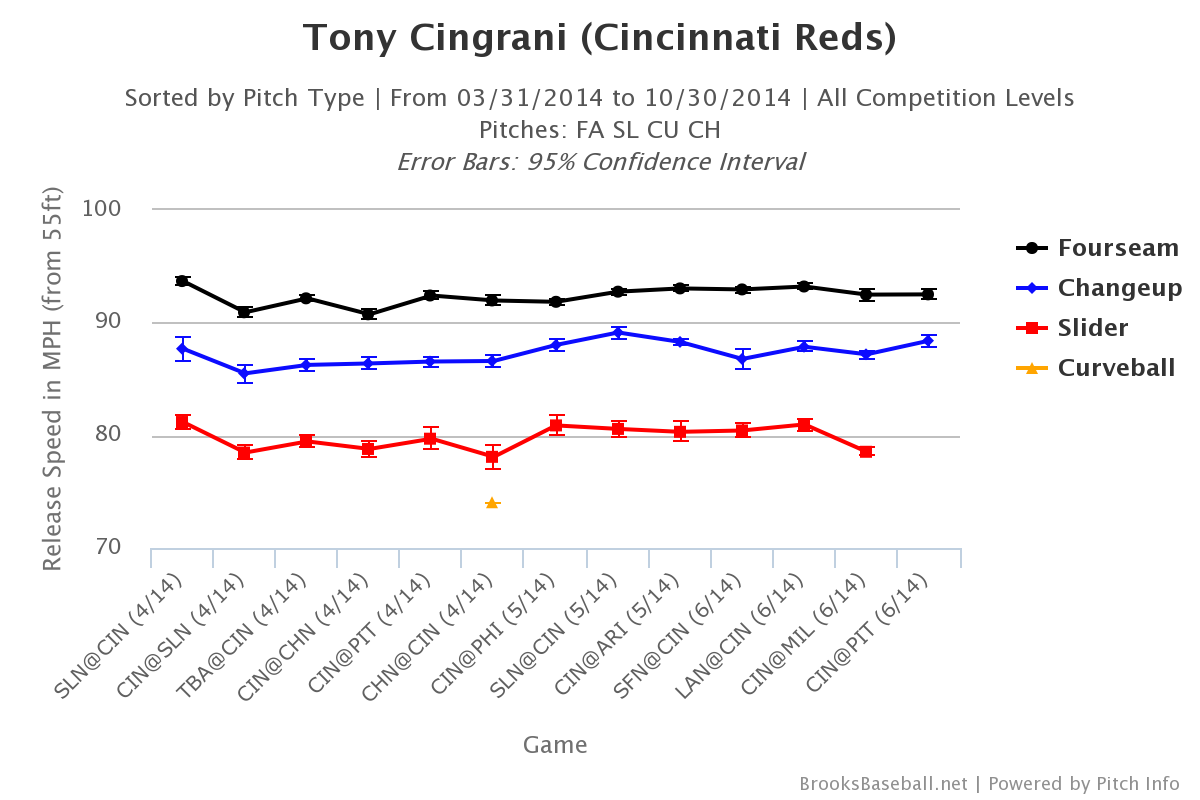 In five starts after coming back from the DL, Cingrani was eminently hittable as evidenced by these numbers: in 27.1 innings pitched, he managed a 1.76 WHIP and .330 ISO while giving up nine home runs (five of which happened at home, for what itÃ¢â‚¬â„¢s worth), although his command showed signs of improvement. The primary culprit was how hittable his fastball was in the lower third of the zone, where he only managed 3.4% misses per swing and was allowing hitters to line it up to the tune of a .550 slugging percentage on 40 balls put in play. 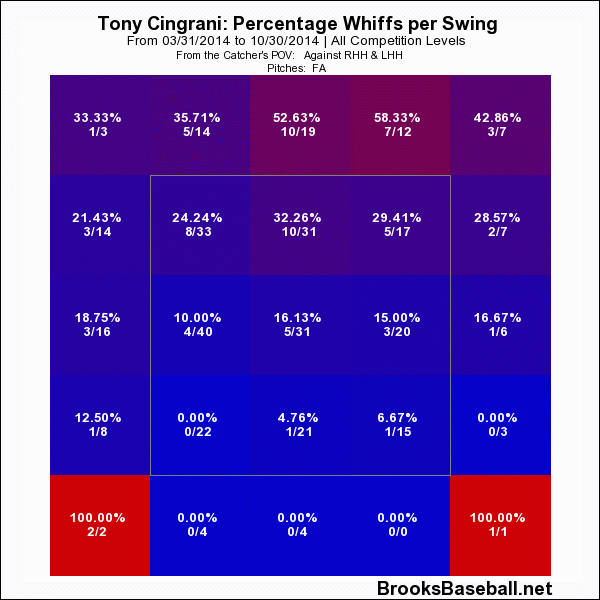 This isnÃ¢â‚¬â„¢t to paint a dim portrait of Tony Cingrani. In fact, it shows his commitment to fleshing out his pitching repertoire, as sneaky as his number one pitch might be. 2014 saw Cingrani commit in earnest to utilizing his slider and changeup to complement his fastball (and, it seems, leading him to abandon his curveball altogether). He may be a bit behind in implementing them due to those shoulder woes but a full season and an all-but-guaranteed rotation spot may allow Cingrani to mature from an advanced thrower into an effective big league starting pitcher this coming season. The key will be to improve the contrast of his changeup to his fastball.

Anthony DeSclafani is the Reds pitching prospect closest to contributing in the majors, primarily because he already has 33 big league innings under his belt. As Doug Gray pointed out over at Reds Minor Leagues, DeSclafaniÃ¢â‚¬â„¢s peripherals from 2014 tell a rosier story than his 6.27 ERA: He only allowed five walks, all of which came in his first four appearances; he didnÃ¢â‚¬â„¢t surrender a walk in the last 11.2 innings he pitched in 2014, and a WHIP of 1.36. ThatÃ¢â‚¬â„¢s partially due to good command of his pitches, partially due to his aggressiveness in attacking hitters.

To pair with that advanced control, DeSclafani has two above-average pitches in his arsenal. His fastball is of average velocity (sitting between 92 and 94 MPH with occasional flashes above 95) with decent rising action and arm-side run. His slider operates almost like a sinkerÃ¢â‚¬â€it has much more 12-6 movement than it does horizontal run, making it a great groundball-inducing pitch if he keeps it down.

Like Cingrani, his changeup is a still-developing third option. HeÃ¢â‚¬â„¢s shown some feel for it between the minors and majors, but it currently has a tendency to float on him and be very hittable. However, there is an encouraging difference between his changeupÃ¢â‚¬â„¢s velocity and his fastballÃ¢â‚¬â„¢sÃ¢â‚¬â€averaging around 7 MPH of differenceÃ¢â‚¬â€especially if DeSclafani can keep hitters honest by occasionally dialing up the latter. 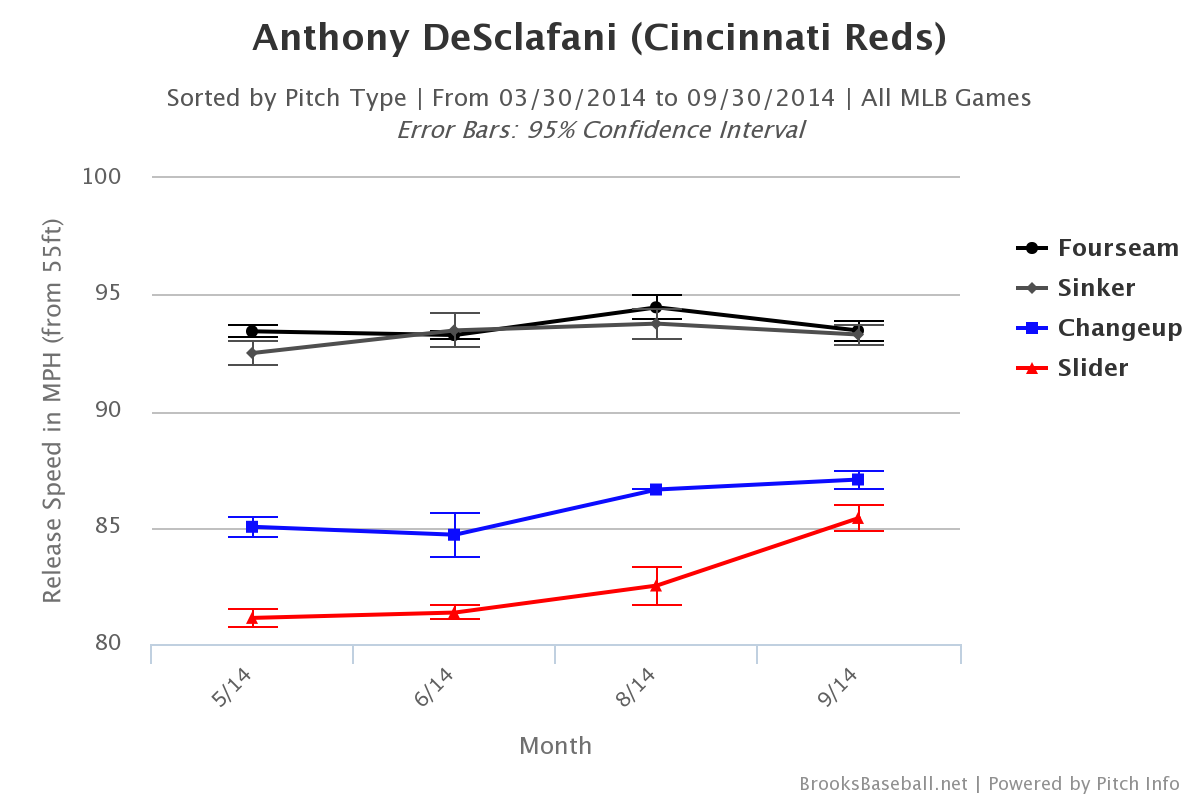 Consensus on DeSclafaniÃ¢â‚¬â„¢s present and future value runs the gamut from future #3 starter to above-average bullpen component. His ceiling isnÃ¢â‚¬â„¢t sky-high, but heÃ¢â‚¬â„¢s already shown an innate knack for pitching at every level of pro ball thus far. With solid control, two pitches already between above-average and very good, and youth on his side (heÃ¢â‚¬â„¢ll turn 25 on April 18, plus heÃ¢â‚¬â„¢s under team control for the next six seasons) he will likely take the fifth starterÃ¢â‚¬â„¢s job out of Goodyear and has the promise to be a pleasant surprise at the back end of the rotation.

Baseball America released their Top 10 list for the RedsÃ¢â‚¬â„¢ prospects yesterday with Iglesias as the second-best prospect behind Robert Stephenson. The Cuban pitching prospectÃ¢â‚¬â„¢s stock is certainly high, but not many have ranked him quite this high considering a lack of starting experience or exposure outside of Cuba.

Again, a tip of the cap to Doug Gray for compiling as much information as we have on Iglesias in his 2015 Prospect Guide. The right-hander boasts some great stuff already, throwing a similar fastball to DeSclafani in velocity (though Iglesias tends to touch 94-95 MPH with more regularity) and arm-side run. He has both a curveball and a slider or perhaps just a multi-angle slurve depending on who you ask. Whichever heÃ¢â‚¬â„¢s pitching, it serves to be a good out pitch with dual-axis movement and good velocity ranging from the high 70s to the low 80s. His changeup already seems to be better developed than CingraniÃ¢â‚¬â„¢s or DeSclafaniÃ¢â‚¬â„¢s, with some good sinking action to pair with low-80s velocity.

HeÃ¢â‚¬â„¢s impressed on every stage thus far, most recently dealing seven sterling innings of relief in the Arizona Fall League where he only allowed a single hit and a WHIP of 0.57. The only issue lies in his lack of experience, though the Reds plan to groom him as a starter right from the jump in Spring Training. Seven innings of Arizona Fall League and no accompanying winter ball action doesnÃ¢â‚¬â„¢t bode entirely well for Iglesias handling an MLB starterÃ¢â‚¬â„¢s workload right out of the gate.

Iglesias spot started in Cuba and often went multiple innings in his relief appearances, logging 52.2 innings over 13 relief outings and two starts from 2012-13. ThatÃ¢â‚¬â„¢s kind of in the ballpark of the workload Cingrani and Nick Howard had in their final collegiate seasons, although both also put in nearly the same amount of work in the low minors that same year. Cingrani got a cup of coffee at the end of the following season and then was on board by 2013, Howard seems on a similar trackÃ¢â‚¬â€it seems a reasonable leap in logic to think Iglesias needs this year to stretch out for him to be better suited to start in 2016.

Though Iglesias might be the most advanced of these three pitchers, heÃ¢â‚¬â„¢ll need time to build up the strength to pitch north of 100 innings in a year. But it would be irrational to ignore his talents when there is a clear need for bullpen help in the here and now. Perhaps Iglesias assumes Sam LecureÃ¢â‚¬â„¢s former spot starter/long reliever role and begins to stretch himself out enough to get some starts in the latter half of 2015 or be the first name up in case of an injury.

All told, these three represent something to be a little hopeful about in the doldrums of early 2015. Sure, itÃ¢â‚¬â„¢s not like having Mat Latos in this rotation, but thereÃ¢â‚¬â„¢s enough upside to accentuate the positives.