The Reds are rumored to be pursuing some hitters this off season and said to have interest in a LF for the middle of the order and possibly a SS with a better bat. Some of the recent discussions here have had several references to where a player fits best in the batting order or what are good numbers for a player at a certain position. IÃ¢â‚¬â„¢ll attempt to shed some light on these by laying out for you below what the MLB average numbers are for each batting order position, as well as each defensive position. IÃ¢â‚¬â„¢ll also illustrate where the Reds as a team rate for each category last season. The Reds team line is color coded. Green indicates they are at or above league average and red indicates below average. The MLB rank is included in each team line (Cin-29) and NL rank is also added as a second number (Cin-19-4) for some categories where it made sense.

LetÃ¢â‚¬â„¢s start off by looking at what an average MLB hitter looks like.

The Reds as we expected, due to injuries and key players performing below expectations, ranked 29th in MLB and 14th in the NL. I knew hitting was down but I was surprised by how much. Over the last 10 years (2005-2014) the MLB average OPS has been as follows.

I found it interesting that the first two slots in the order were so similar with about a .320-.325 OBP and about a .390 SLG. Also of note here is that both the #1 and #2 slots in the order exceeded the MLB average OBP of .314. The big question here is will Billy Hamilton, who put up .292 OBP last year and a .308 OBP in AAA the year before, continue to perform badly in this spot. The Reds need Hamilton, who we know will not bat anywhere in the Reds lineup but leadoff, to more closely resemble his minor league version who had a career minor league OBP of over .350 before reaching the AAA level. He only had one month last year where he bested a .320 OBP. I was also surprised that the Reds fared so well in the #2 slot. Closer examination shows that these numbers are largely due to 201 AB for Todd Frazier there with a .294/.341/.493/.834 slash line. I think IÃ¢â‚¬â„¢d like to see more of this next year, given the current roster.

Note that the #3 spot is the place where teams put their best hitter. The Reds poor showing at #3 was in a large part due to Joey VottoÃ¢â‚¬â„¢s injuries and a poor showing there by Brandon Phillips (270 AB .646 OPS) in a down year. A healthy Votto will hopefully solve this issue.

The #4 and #5 spots are the place for your teams second and third best hitters respectively. The down numbers in the #4 spot for the Reds are mainly due to Jay BruceÃ¢â‚¬â„¢s poor season. He posted a .657 OPS here in 207 AB. Devin Mesoraco was the other main contributor here with 183 AB and he did well with a .769 OPS. The Reds poor showing at #5 is again due to Jay BruceÃ¢â‚¬â„¢s poor season. He had a .612 OSP in 157 AB at #5. Frazier (.934 OPS) and Ludwick (.778 OPS) both did well at #5 in just over 100 AB for each. Jay Bruce rebounding to his old self is a big key for next season. I suspect he will as does Steamer projections which are calling for a .239/.312/.441/.753, which I think may be a bit low even. The steamer numbers make him an average at worst #4 or #5 hitter. Mesoraco was awesome last season and he would be the leading candidate right now for #4. The caveats are that his numbers may trail off a bit from last year, but not as much I think as Steamer projects .246/.319/.440/.759. The other caveat here is that youÃ¢â‚¬â„¢d have to juggle the middle of the order often on days that he does not catch.

The #8 slot is for your worst hitter. That was Cozart last year he was even below the average there in a down year. Steamer project him to bounce back to a .643 OPS next year which may even be a tad low in my estimate, and that would make him at least an average #8 hitter.
The #9 slot is the pitcher and pinch hitters. The Reds fared well there, 4th in the NL, due largely to some HeiseyÃ¢â‚¬â„¢s .940 OPS as a pinch hitter.

I believe the batting order below is the best the Reds could field next season with the current roster. The numbers are Steamer projections and the Diff column is the difference in OPS from this years MLB average batter at that position in the batting order. This would suggest the Reds as of right now would be a little better than average hitting team next season. 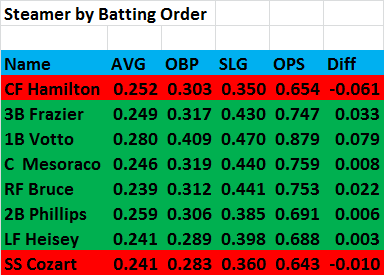 LetÃ¢â‚¬â„¢s now look at the MLB average hitter at each fielding position.

One can see from the data above that due to the injuries and worse than expected performances the Reds were only average or better last season at C and 3B. Bounce back seasons by Votto, Phillips, and Bruce should turn 1B, 2B, and RF green for next season. That leaves LF, SS, and CF as the target positions for which the Reds should focus for improving the offense for next season.
Note the position breakdown from best to worst is as follows.
Pos OPS
1B .755
RF .734
LF .723
CF .718
3B .714
C .687
2B .683
SS .677

If we again use the Reds Steamer projections for next season versus the MLB average for each position as we stand now. We see that the Reds look to have average or better hitters at all positions except for CF, LF, and SS. 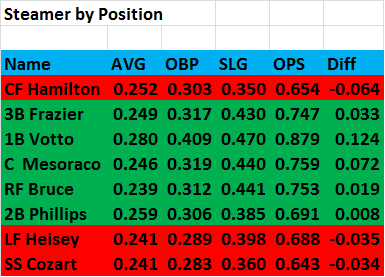 Once again, I always find it illuminating to see the MLB average numbers for batting order slots and fielding positions. It helps you set baselines when evaluating players, you can determine where your club can and should try to improve, and you can learn a lot about how current major league clubs are building their lineups.