Getting the offseason right often involves more than deciding which new players to acquire. Important organization judgments can also concern the current roster.

Major league baseball teams own (control is a more polite word) players in their organization for six big league seasons. Clubs can reach agreements with their own players to extend their terms beyond those six years. Those deals are referred to asÃ‚Â contract extensions.

Teams benefit from contract extensions in three ways. First, when they agree to a specific salary for any or all of the player’s three arbitration-eligible seasons, it creates cost certainty for budget planning. Second, if the contract is early enough in the player’s career, the club will receive a discount compared to shopping for similar WAR in the open market. That discount comes from the player’s desire for the security that comes from the newly guaranteed wealth. Finally, the negotiations can lengthen the team’s control into the player’s free agency period.

The downside for the club is the risk that the player will get injured or perform poorly and the team ends up stuck with a bad contract.

Young players are generally favorable to deals that make their earnings guaranteed. Without an extension contract, if a player gets seriously injured during their first year of arbitration eligibility, for example, they could be cut by the team at will. But because of the guaranteed nature of major league baseball contracts, if the club signs an extension and the player gets hurt (or slumps terribly) the team still owes the money.

A couple recent examples for the Reds:

Jay Bruce signed a six-year extension after the 2010 season. It covered his four years of arbitration (Bruce was a Super Two player) and two years of free agency. The Reds have a $13 million option for the 2017 season, when Bruce will be 30 years old.

One month later, Johnny Cueto signed a 4-year, $27 million extension that covered his three arbitration years and one year of free agency. The agreement also included a one-year team option for $10 million that covers 2015, this season. Cueto will turn 29 before Opening Day.

Much has been written about whether the Reds should and will sign extensions with pitchers Mat Latos, Mike Leake and Cueto. But new deals for two position playersÃ‚Â — Todd Frazier and Devin Mesoraco — would also seem to be worth considering.

Frazier and Mesoraco are linked in many ways. They were both first-round picks by the Reds in 2007 and each debuted with the major league club in 2011. They both are right-handed and had strong offensive seasons in 2014. Both have positive defensive stats. Both made the All-Star team for the first time in 2014. They each have reputations for being strong clubhouse guys.

And, Todd Frazier and Devin Mesoraco have identical contract statuses. They just finished their pre-arbitration years and are set to enter their first of three arbitration-eligible seasons. Without contract extensions, they both would reach free agency in the 2018 season.

Given all those similarities, it’s tempting to lump the two together when discussing how the Reds should negotiate with them about their futures. For example, John Fay wrote earlier this month that the Reds should offer both players long-term contracts this offseason.

But you really can’t reach that conclusion without analyzing the one crucial dissimilarity between Todd Frazier and Devin Mesoraco … their age.

Frazier is more than two years older than his teammate. And, like choosing the road less traveled, that makes all the difference.

Should the Reds sign an extension this winter that guarantees Frazier money in 2018 and beyond?

To answer that question, one needs to consider the aging curve for major league players. An aging curve shows how the average player declines as they get older. This is a natural and inevitable phenomenon. Individual player results will vary. Some will perform better than curve, of course. But it’s important to understand the average.

Figuring out accurate aging curves in the post-PED Era is tricky. Factors beside stricter enforcement against PEDS — defensive shifts, advanced data on hitter weaknesses, pitcher specialization, rising fastball velocity and expandingÃ‚Â strike zones — have worked against hitters since 2006. For most hitters, their batting stats have declined in ways that look like the player is getting old, when in fact, aging isn’t the entire explanation. Therefore, it’s important to use a statistic like wRC+ (weighted runs created) that is neutralized by season and run scoring environment. Here areÃ‚Â aging curves for wRC+ (Zimmerman). The green curve is the post-PED era (2006-2013). 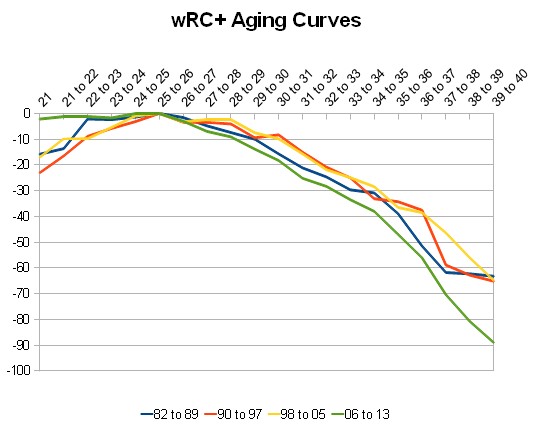 Not only has the post-PED era seen a decline in performance for players older than 26, but notice the steeper decline in the green curve after age 30 and particularly after age 34. Hitters decline, on average, two years earlier than they did from 1990 to 2005.Ã‚Â The data has profound implications for the strategy the Reds should take in dealing with Todd Frazier.

Frazier will turn 29 on February 12 of this year. That means when he reaches free agency, he’ll already be 32 years old and well down that curve. Chances are great that the Todd Frazier who played for the Reds in 2014 won’t be much like the guy who would take the field in 2018 and beyond.

Redleg NationÃ‚Â covered Devin Mesoraco quite a bit this year: Biography, mid-season MVP delusion, August update, historical comparisonÃ‚Â and he’s swinging harder. All positive stuff. But as we saw with Todd Frazier, the fact that Mesoraco had a great 2014 isn’t definitive regarding how the Reds should approach him for 2018.

But here’s where that age difference really matters.

Devin Mesoraco will turn 27 on June 19, 2015. That means when he finishes his arbitration years, he’ll just be 29, reaching age 30 halfway through that first free agent season.

In looking at how other catchers have aged in the post-PED era, what can the Reds expect from Mesoraco in his early 30s? The graph above shows performance at age 29-30 to be markedly better than at ages 33 and above.

You might expect that catchers, due to the extra stress on their bodies, would experience a more severe decline associated with aging. The data shows that assumption to be wrong.Ã‚Â Recent research shows in terms of durability and WAR, catchers age pretty well through their early-30s (Travis Sawchik). The graph below shows how games played declines as catchers move through their early 30s. Catchers were considerably more durable until age 34 in the PED era (red line), but in the post-PED era (blue line) they don’t show the same rapid decline in playing time.

Yes, the aging curve now starts at a lower average level — we’ve documented the decline in hitting overall over the past few years — but the rate of decline stays relatively flat through the players’ early 30sÃ‚Â (Cameron). 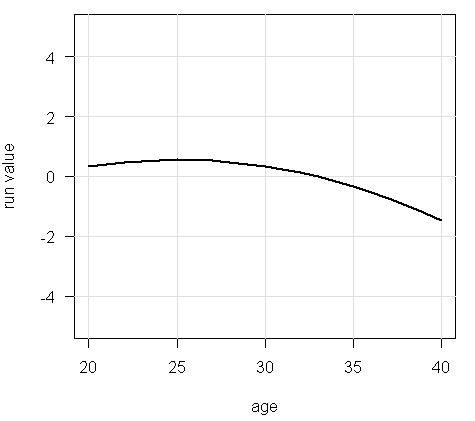 Certain defensive skills for catchers, like pitch framing, do not decrease as they age. A few, in fact,Ã‚Â enhance their framing skills over timeÃ‚Â (Marchi).

If the Reds were to extend Mesoraco for two or three years beyond his arbitration years — in other words, buy out 2-3 years of his free agency — the data shows the club would have little reason to fear a sudden decline over that period of time. Devin Mesoraco stands a pretty good chance of being close to the same player at age 32 as he is at age 29.

There’s no real urgent need to negotiate with either Todd Frazier or Devin Mesoraco. The good news is they are under team control for three more seasons. The front office could decide to watch both players perform in 2015 and wait until next offseason to deal. But if the organization chooses to delay a year and Frazier and/or Mesoraco duplicate their 2014 success in 2015, the signing price jumps up relative to negotiating now.

The Reds should negotiate Todd Frazier’s salary for his three arbitration seasons, but no more. That would give the club cost certainty. To gain security, Frazier would offer a small discount relative to what he’d expect to receive in arbitration. The Reds could float the idea of one or two years beyond that, only as a team option, not a guarantee. But it’s hard to imagine Frazier agreeing to a contract that extends one or two years into his free agency. He won’t want to risk waiting until age 34 to cash-in. Rather, in 2018, at age 32, he’ll sign a big, long-term contract with a team willing to pay him for his past. The Reds should not be that team.

Devin Mesoraco is an entirely different case. This offseason, the Reds should sign him to a five or six-year contract, buying out with a guarantee his first two or three years of free agency. If Mesoraco signed a six year agreement (a three-year extension), he would be just 31 years old at the end of the deal. Beyond that term, it would make sense for both sides if the extension had a team option for the sixth or seventh year. Mesoraco would still be plenty young to sign another lucrative multi-year contract after that.

For both Frazier and Mesoraco, the Reds should be willing to say good-bye as the player reaches the age 31-32. That’s not to say either player won’t be productive past that. But guaranteeing money for several seasons beyond that timeframe is a risk the club shouldn’t take this winter. Pay for what the player is going to do, not what he’s already done.