In Part 1 and Part 2 we looked at trades with four teams that appear to be decent matches for the Reds. Today, we’ll finish the look at available LF by discussing the three optimal candidates and one other possibility.

Check out Mondays’ post for details on the criteria we’re using for potential targets and an explanation for team control.

Table glossary: The numbers in the charts below for OBP, BB%, ISO and wRC+ are based on projections (Steamer at FanGraphs) for the 2015 season. DRS stands for defensive runs saved and thatÃ¢â‚¬â„¢s their 2014 data from playing outfield. fWAR 14/15 is their WAR (wins above replacement) as estimated by FanGraphs for 2014 and projected for 2015.

The dare-to-dream category includes three ideal LF candidates for the Reds where there’s at least a plausible pathway for a deal. The first two players are veterans, the final is a youngster. Remember, this category is labeled “dare to dream.”

Hitting:Ã‚Â Jose Bautista is one of the top hitters in baseball and probably the best who could conceivably be traded by their team. Elite OBP, walk-rate and power — the whole package at the plate. His bat would transform the Reds lineup.

Defense:Ã‚Â Strong arm, good glove. Played some 1B this year. Played 3B earlier in career. Mostly a RF, where he has an excellent reputation, but the metrics are mixed. Would probably mean a shift to LF for Jay Bruce, although Bautista has a little experience there.

Why Trade is Possible: As Toronto’s best player, Bautista is close to falling into the “face of the franchise” category. Their GM has recently said Bautista wouldn’t be traded. But the needs of the two clubs match up perfectly. They have a gaping hole at 2B and need defense there. The Blue Jays could also use a top-of-the-rotation pitcher. Toronto has a top-ten payroll, but there are limits to their spending. They do have salary coming off the books, but are looking to re-sign Melky Cabrera and have to find a new closer (hint). Their self-imposed ban on free agent contracts longer than five years might take them out of the Scherzer, Shields and Lester talks.

Conclusion:Ã‚Â A package of Brandon Phillips and Johnny Cueto could get the conversation started. The Reds would probably have to add a second-tier prospect or two. I doubt the Reds would consider trading Jay Bruce, but this is exactly the kind of trade where it would make sense (although it wouldn’t solve the LF problem). Same with Aroldis Chapman. 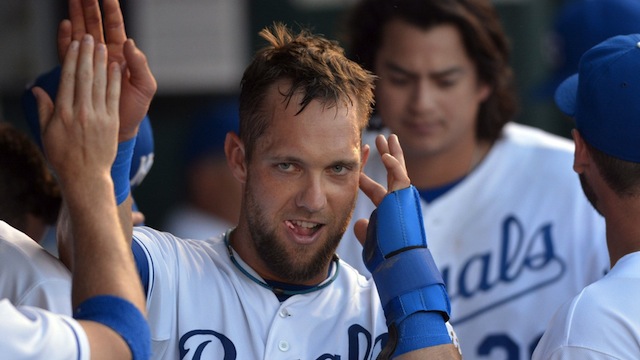 Hitting:Ã‚Â Alex Gordon has nearly 1,200 plate appearances leading off for the Kansas City Royals, but can hit throughout the lineup. He has a strong OBP and walk-rate and well above average power.

Why Trade is Possible: Money and the Myers-for-Shields deal. The Royals have indicated they’ll make a run at re-signing James Shields, their top starting pitcher. Money may be less of an issue with their lucrative postseason run, but it’s hard to imagine them competing for Shields with teams like Boston or New York. A trade for an ace makes more sense.

Conclusion:Ã‚Â This deal would be built around Johnny Cueto. The Royals aren’t looking to re-build, they want assets that will help them win now. 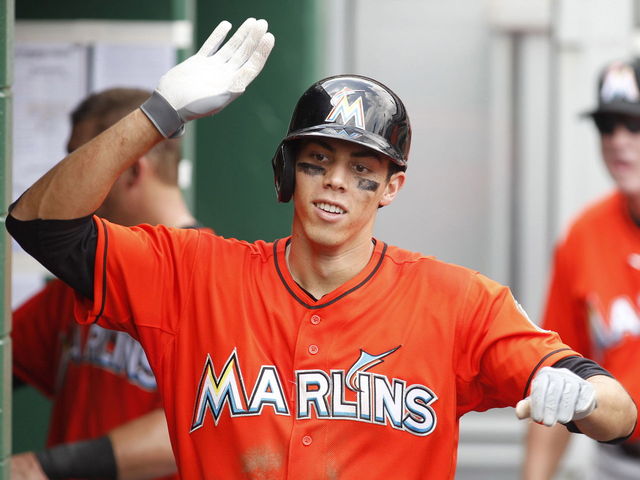 Hitting:Ã‚Â Christian Yelich has exceptional on-base and walk skills and his power is improving. Yelich has experience leading off for the Marlins. He’ll be 23 in December, a full year younger than Billy Hamilton. Yelich is young enough to expect improvement in hitting across the board. Stole 21 bases in 2014.

Defense:Ã‚Â Tremendous range and glove. LF is his regular position. Not a single ball would fall in the outfield between Yelich and Hamilton. Possible the two of them could cover the outfield themselves, allowing Jay Bruce to dispense global payback by playing a defensive shift position for each better.

Why Trade is Possible: The Marlins have Giancarlo Stanton and Marcell Ozuna to anchor the outfield. Trading Yelich would allow them to pursue Cuban defector/free agent Yasmany Tomas and allow Tomas to play in his regular position. The Marlins also don’t have an established second baseman. Their top off-season acquisition will likely be an experienced starting pitcher to complement their staff of young starters.

Conclusion:Ã‚Â Yelich would become a cornerstone player for the Reds, with five years of control.Ã‚Â Cueto (or Latos or Leake) could make sense as a cheaper alternative for the Marlins than pursuing a pricey and long-term free agent commitment. Wild card is Aroldis Chapman. I’ve always thought Miami was the logical best trading partner for AC because of the appeal to local Cuban fans. The Marlins already have an established closer (who they could trade) but they could also, sensibly, convert Chapman to the starter they need. Could an offer of Chapman (or Cueto) and a top prospect get this done? Or maybe Chapman and Simon? Yes, please. 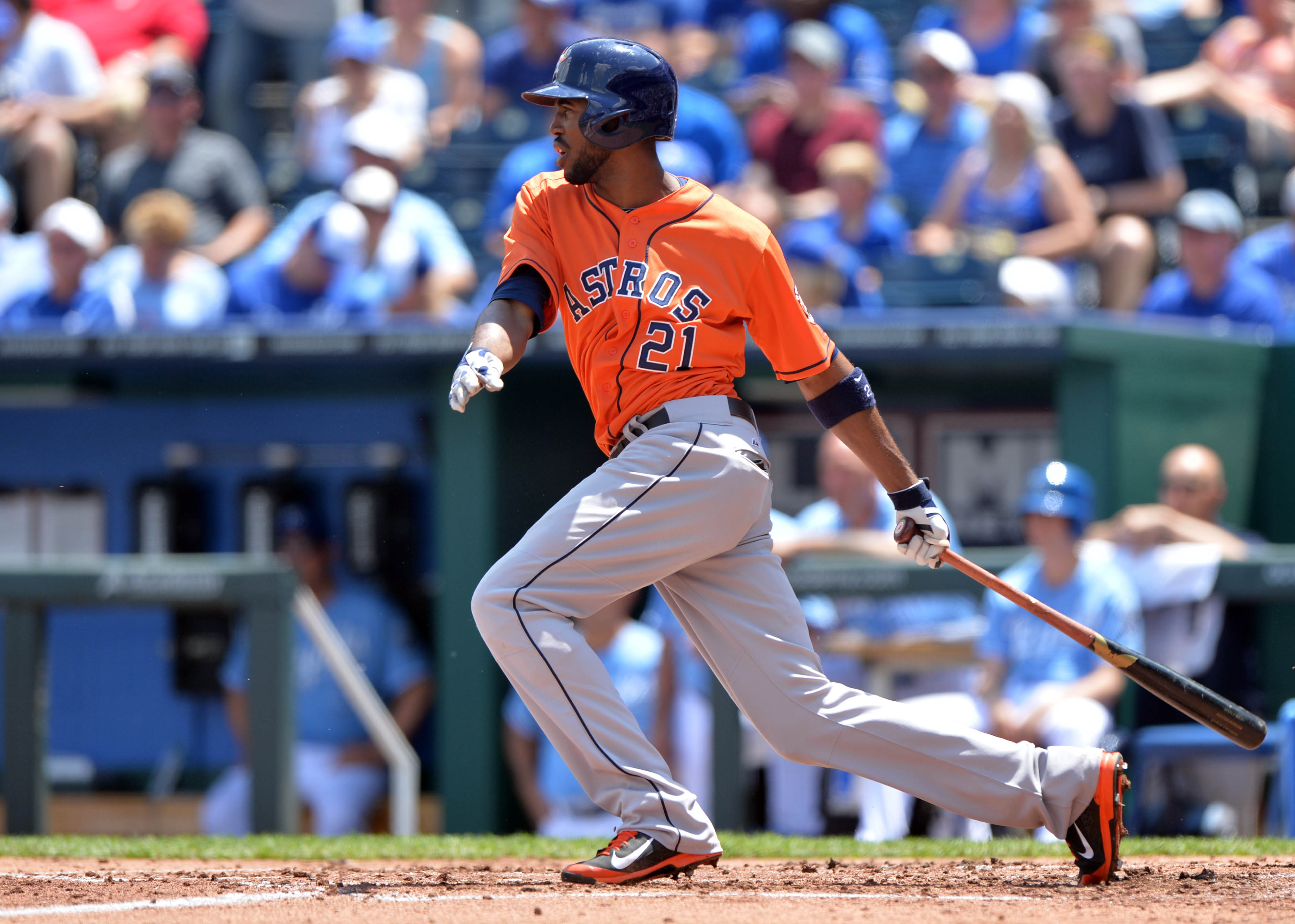 Hitting:Ã‚Â Like Yelich, Fowler has a great OBP and walk-rate. Decent power, too. Legitimate lead-off hitter. OBP projection seems low considering Fowler has averaged .380 OBP the past three seasons, including last year in Houston. Averaged over 3.0 WAR on offense the past four seasons (Baseball-Reference).

Defense:Ã‚Â Primarily been a CF. Shockingly bad defense given his athleticism. Maybe better in LF.

Conclusion:Ã‚Â Fowler may not be in long-term plans for Astros, given outfield talent in pipeline and likely big contract. The Astros aren’t ready to contend in 2015 so might be likely to trade Fowler for prospects. Shin-Soo Choo type deal for the Reds, without the Drew Stubbs piece. Fowler for Simon?