The Reds will end 2014 the same way they did in 2013: against the Pittsburgh Pirates. This time around there will be no big do-or-die game. There will be no hope of the Reds still playing baseball next week. It has been a long, painful, frustrating, and mostly full of disappointment 2014 season for the Cincinnati Reds, but it is finally just about to conclude. For some it will be a relief that the season is mercifully over, and others will be sad there will be no more Reds baseball this year.

The Pirates are just one game out of first place in the NL Central. The Cardinals are playing three games this weekend at the Arizona Diamondbacks. This is a huge series for the Pirates, as they obviously want to avoid playing in the wild card game.

What might be even more intriguing for baseball fans would be if the Pirates and Cardinals end the season tied. If that was to happen, the two teams would play a game for the NL Central title on Monday night in St. Louis (the Cardinals would host the game because they went 11-8 vs the Pirates during the regular season). The winner of the game would advance to the NLDS. The loser would then play in the wild card game against the Giants. If this were to happen, it would be the first of this type of 1-game playoff that wasn’t an elimination game in baseball history. Even more crazy, the two teams would play with the expanded rosters in that game, because it counts as a regular season game. That is certainly something interesting to watch this weekend.

7. Final games in a Reds uniform? 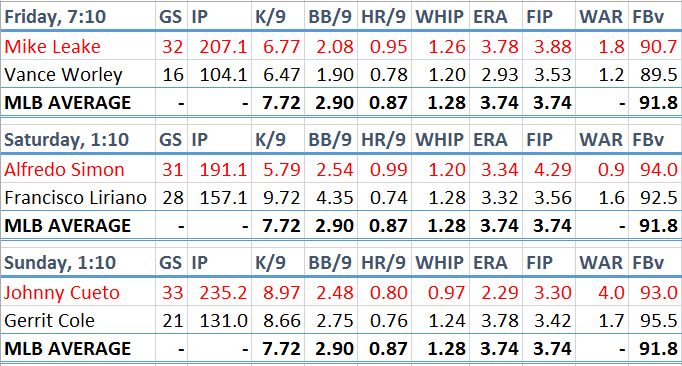