As the final few games of 2014 tick away, we can ask how this year was different from previous seasons. This year, it turns out, was both different and the same: the trend that began in 2007, the decline of offense, continued throughout baseball. While it was frustrating watching the Reds hitters flail in the batters box, it turns out this was not an uncommon story across the league. Pitchers are not just winning the war, they are dominating it. 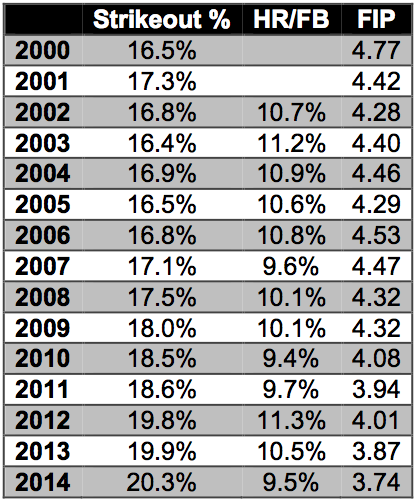 Now, the Ã¢â‚¬Å“average pitcherÃ¢â‚¬Â does not exist because we are pooling relief and starting pitchers into one group. So who do you think is tilting the balance of power? Starters? Relievers? It turns out that regardless of which option you pick, youÃ¢â‚¬â„¢re right: both relievers and starters are having their best years in a very, very long time.Home runs are leaving ballparks less frequently, pitchers are striking out more hitters, and (by definition) pitchers FIP is almost a full point lower than they were 14 years ago. 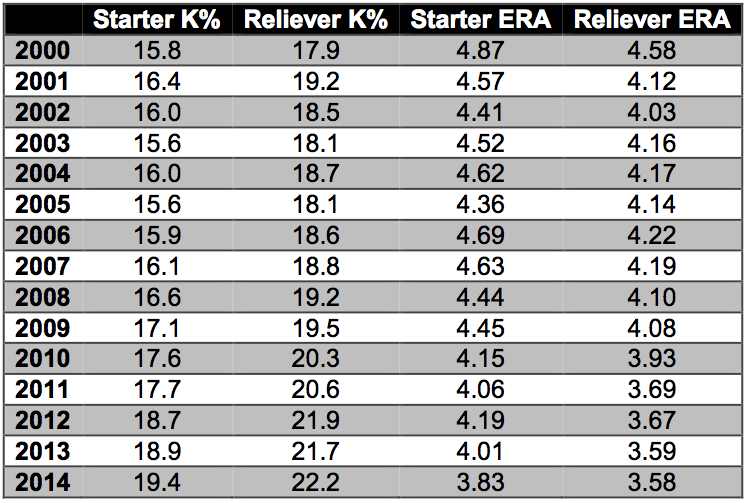 Not surprisingly, this has impacted the number of runs scored per game. For example, the league is on pace to hit 470 fewer home runs this year (4190) than last year. This is also fewer home runs than any year since 1995 (4081). At the current rate, the league is going to score 564 fewer total runs than they did last year, the fewest since 1992 (ignoring the strike shortened season of 1994). Conventional baseball wisdom tells us that relief pitchers can go Ã¢â‚¬Å“all outÃ¢â‚¬Â against the hitters because they are throwing only a few pitches. This results in a higher strikeout percentage than starters. Well, todayÃ¢â‚¬â„¢s starters are striking out more hitters than the pitchers that went Ã¢â‚¬Å“all outÃ¢â‚¬Â in 2000. Despite relief pitchers beingÃ‚Â used in situations that give the pitcher a matchupÃ‚Â advantage (well, the Royals might be an exception to this), modern starters are across-the-board better than their 2000 counterparts.

There are many factors that influenced the offensive explosion from the mid-90s through the mid-2000s. Harder bats, smaller ballparks, a smaller strike zone, and yes, PEDs changedÃ‚Â the number of runs scored in the league (you can read all about the differences in this article). It is unclear, however, how much further offenses will fallÃ‚Â before pitchers and hitters reach an equilibrium in the number of runs scored. Both starters and relief pitchers continuedÃ‚Â their year-to-year improvement in their strikeouts rate, FIPÃ‚Â and ERA.

What makes this offensive drought so amazing is that there are four more teams (and 7685 more games) today than there were in 1992, yetÃ‚Â league is only projected to score 2,352 more runs this year than itÃ‚Â did in 1992.

Fans all around the league praise their pitching staffs while bemoaning their teamÃ¢â‚¬â„¢s hitters for not reaching base. This has a few implications for the Reds. Since Joey VottoÃ¢â‚¬â„¢s contract was signed at the end of the offensive explosion, his on base skill is now a rarer commodity than it was at the time of his contract. Moreover, the dynamic shifts the relevant reference point for how much we should be paying top-of-the-rotation pitchers. As the Reds look into their crystal ball, they should ask how much an elite hitting catcher will be worth in an era of depressed hitting statistics. Or third basemen. Did the offensive hole in left field just get that much larger as the bottom dropped out of the market for hitters? And can we please stop spending so much onÃ‚Â relief pitching? At the rate relief pitching is proliferating, we could probably pull someone out of the stands to pitch the ninth.

Every offseason is different as the relevant talent pool in baseball shifts. I just hope Walt &Ã‚Â Co. are able to take advantage of these market trends in their offseason dealing.