The Reds were shutout for the 17th time in 2014 on Wednesday night. Ã‚Â Daniel Corinco got off to a strong start for the Reds, but was unable to get out of the 5th inning. Kyle Lohse dominated the Reds offense, pitching a complete game shutout in his final start of 2014. 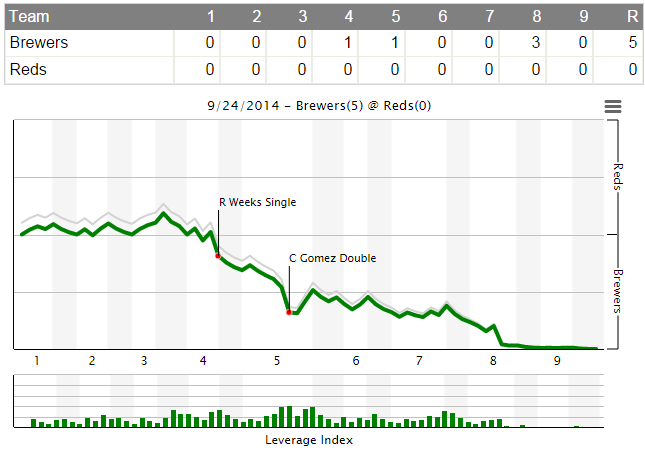 According to FangraphsÃ‚Â WPA statisticÃ‚Â (winning percentage added), the most important play of the game wasÃ‚Â Carlos Gomez RBI double in the 5th inning off Daniel Corcino, giving the Brewers a 2-1 lead.Ã‚Â The Brewers then had runners on 1st and 3rd with 1 out. That play decreased the Reds chances of winning by 11.0% (from 27.0% to 16.0%).

Another day, another incredible play by Billy Hamilton. I mean seriously, how incredible is this guy defensively? My mind can’t even fathom that Hamilton played his FIRST PROFESSIONAL GAME IN CF IN APRIL OF 2013. The reaction byÃ‚Â Daniel CorcinoÃ‚Â was pretty awesome too. It sure doesn’t look like these two guys have mailed in the rest of this season.

TheÃ‚Â Reds offenseÃ‚Â was shutout for the 17th time in 2014. That is the most times the Reds have been shutout in a season since 1943.

The Brewers walked 10 times tonight, while the Reds didn’t walk once. That is not good.

Unfortunately, after Billy Hamilton made that amazing catch above, he left the game with a mild concussion in the following inning.

Not so random thoughts…..

Daniel CorcinoÃ‚Â pitched very well through the first three innings. He allowed a run in the fourth inning, and then loaded the bases and exited the game in the fifth inning. Tonight was Corcino’s final start of the season, and all in all, I think it was a fairly successful trial in the big leagues for him. Corcino certainly showed flashes of why he was the Reds #4 rated prospectÃ‚Â according to Baseball AmericaÃ‚Â back in 2012. Corcino struck out 15 batters in 18.2 IP (7.23 K/9).

Tonight was most likely my last recap of this season. To all the loyal readers of Redleg Nation, thanks for putting up with me this season. It has been a blast (well, except for the actual games that I did the recap for).