This is part three of a recap of the 2014 Dayton Dragons. In part one, we reviewed the seasons of blue-chip pitching prospects Nick Travieso, Amir Garrett, and Sal Romano. In part two, we looked at 2014 first round draft picks Nick Howard and Alex Blandino as well as several Ã¢â‚¬Å“under the radarÃ¢â‚¬Â prospects. Today, we look at several other players who spent all or part of the 2014 season with the Dragons.

Becker, a left-handed pitcher out of Yale University, joined the Dragons in late May without reason for great expectations.Ã‚Â  In two previous seasons of professional baseball, he had posted a 6.99 ERA, allowing 69 hits and 34 walks in 47.2 innings (all with Billings). At first, Fossas used him in non-stress situations, but Becker pitched so well that he eventually became a dependable arm out of the bullpen in any game condition. With excellent size at 6Ã¢â‚¬â„¢6Ã¢â‚¬Â, 240 lbs., Becker improved his fastball from the mid-80Ã¢â‚¬â„¢s in previous seasons to a consistent 90+. In an organization short on left-handers, he surely opened some eyes. He finished with a 2.17 ERA in 26 games, a .203 opponents batting average, and nine walks with 44 strikeouts.

Watch in the Future

Of all Dragons players in 2014, Dan Langfield, a right-handed pitcher, might have delivered the most tantalizing season. At times, he completely overmatched opposing hitters like few other pitchers in recent memory in Dayton. His combination of a fastball in the mid-90s and a breaking ball with tremendous downward action produced some headshaking strikeouts.Ã‚Â  Langfield, a Reds third round draft pick in 2012 out of the University of Memphis, missed the entire 2013 season with a shoulder injury, and his start to the 2014 season was delayed a full month.

For most of LangfieldÃ¢â‚¬â„¢s time on the mound with the Dragons in 2014, he was simply too much for Midwest League hitters. After LangfieldÃ¢â‚¬â„¢s outing on July 12, his ERA stood at 2.29.Ã‚Â  At the time, opposing hitters were batting a combined .168 against him, and he had 56 strikeouts in 41.1 innings.Ã‚Â  But Langfield developed problems throwing strikes and he was eventually shut down with three weeks to go in the season. His final numbers were not indicative of the way he pitched with a 3-2 record and a 4.62 ERA, though he did finish with 81 strikeouts in 60.2 innings and an opposing batting average of .205. Still, there is far more to be seen from Langfield in the future if he can stay healthy.Ã‚Â  Scouts agree he is a future major league pitcher. 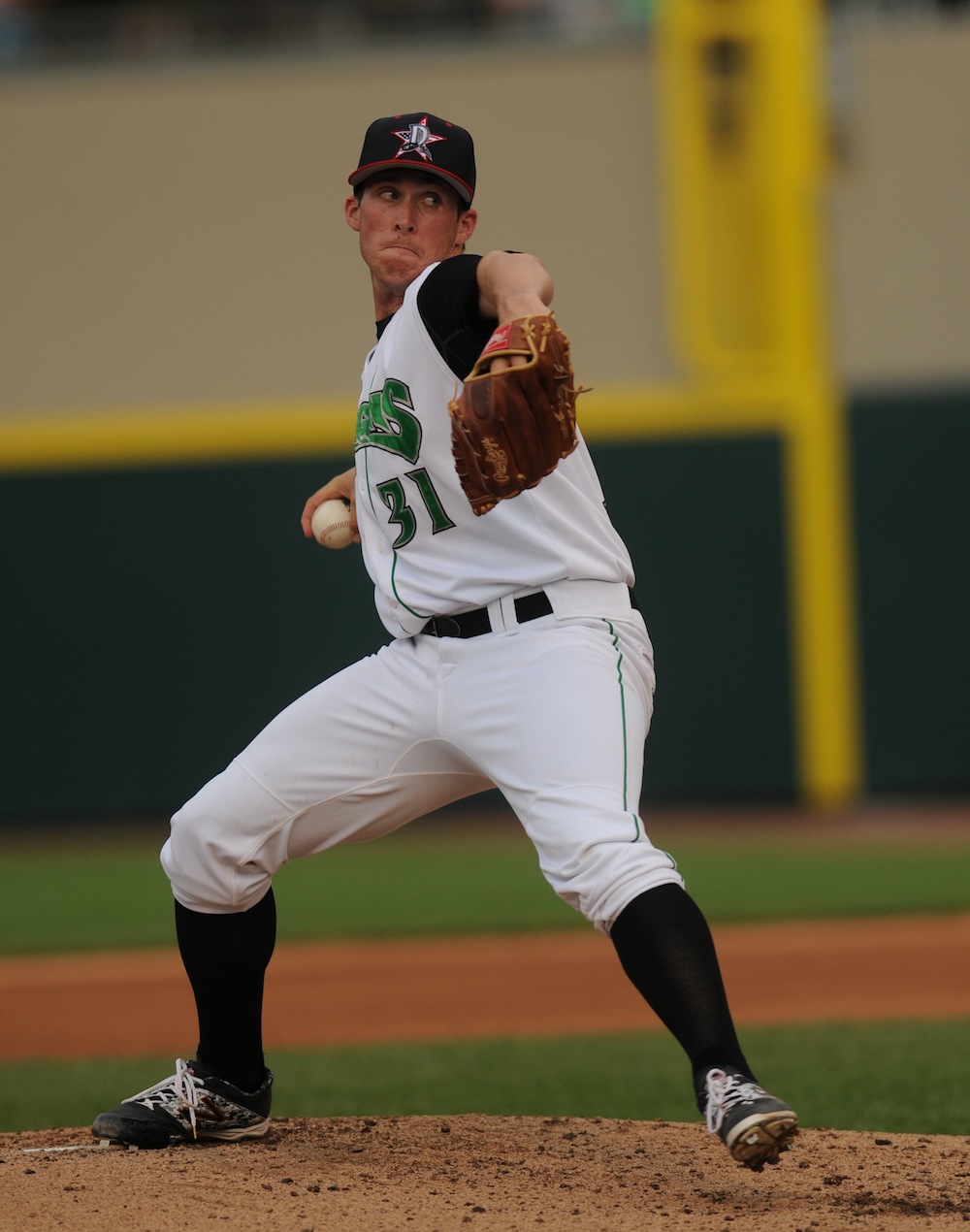 Phillip Ervin, the Reds 2013 first round draft pick out of Samford University in Alabama, was never able to provide the kind of production that was expected from a player that most observers ranked as one of the top five prospects in the organization entering the season. His best month was June when he hit .268 with a pair of home runs, but his average never topped .240 all season. He finished at .237 with seven home runs and 68 RBI.

Ervin did provide more extra base production in the second half when he hit six of his seven home runs, and he was a proficient base stealer, swiping 30 on the year in 35 attempts.Ã‚Â  The element of his game that improved the most of the course of the season was his defense as he developed into a good center fielder, improving his routes to fly balls and utilizing his strong athleticism. He showed he could play any of the three outfield positions and if his bat improves as he progresses up the ladder, he will provide some options.

Ervin possesses excellent bat speed and when he makes solid contact, the ball rockets toward the gaps. Some scouts commented in 2014 that Ervin will improve when he begins hitting the ball to all fields. ErvinÃ¢â‚¬â„¢s foot speed caused some disagreement among scouts. He does not post quick times to first base, causing some in the scouting community to report him as only an average runner. Others point out that Ervin takes such a big swing at the plate that he is slower out of box than most hitters, and that his mediocre times to first base are not indicative of his actual speed.Ã‚Â  Ervin does not possess the blazing, game-changing speed of former Dragons Billy Hamilton and Junior Arias, but he does cover ground in the outfield and can take the extra base when the opportunity arises. Outside of Arias, Ervin might rank as the next fastest Reds prospect in the farm system.

Joe HudsonÃ‚Â was a sixth round draft pick out of Notre Dame in 2012 and spent all of 2013 with the Dragons before returning to start the Ã¢â‚¬â„¢14 season. Hudson is a similar player to former Dragons catcher Tucker Barnhart. While he cannot quite match BarnhartÃ¢â‚¬â„¢s superior catch-and-throw skills (not many catchers can), he still may have been the best defensive catcher in the Midwest League in 2014. Hudson led all MWL catchers in caught stealing percentage by a huge margin, throwing out 52 percent of opposing base stealers (the league average was 32 percent and no other catcher recorded higher than 39 percent).

Hudson is a quality leader and did a great job handling the pitchers.Ã‚Â  Nick Travieso, an intelligent thinker certainly capable of calling his own game, admitted late in the season that he did not shake Hudson off on a single pitch selection all year. Also a great competitor, HudsonÃ¢â‚¬â„¢s intense approach to the game was missed after his promotion to Bakersfield in early August.

As a hitter, Hudson still has a ways to go. He his just .216 in Dayton, down from the .247 mark he put up in 2013. He hit three homers with the Dragons. Interestingly, HudsonÃ¢â‚¬â„¢s offensive numbers improved dramatically after his promotion. In just 14 games with the Blaze, he hit five home runs while batting .289. The Midwest League is certainly a pitcherÃ¢â‚¬â„¢s league, while the California League is the epitome of a hitterÃ¢â‚¬â„¢s league, so the numbers are difficult to analyze. Hudson makes consistent contact so it will be interesting to see how he improves as a hitter as he progresses. Some feel that Hudson has the strength to hit some home runs, something he did in Bakersfield (.689 slugging percentage) but could not do in Dayton (.316 slugging percentage). Others feel that Hudson would be better off hitting line drives through the middle. Either way, his defense makes him an interesting prospect.Ã‚Â  If he can improve his bat, he will play in the big leagues. 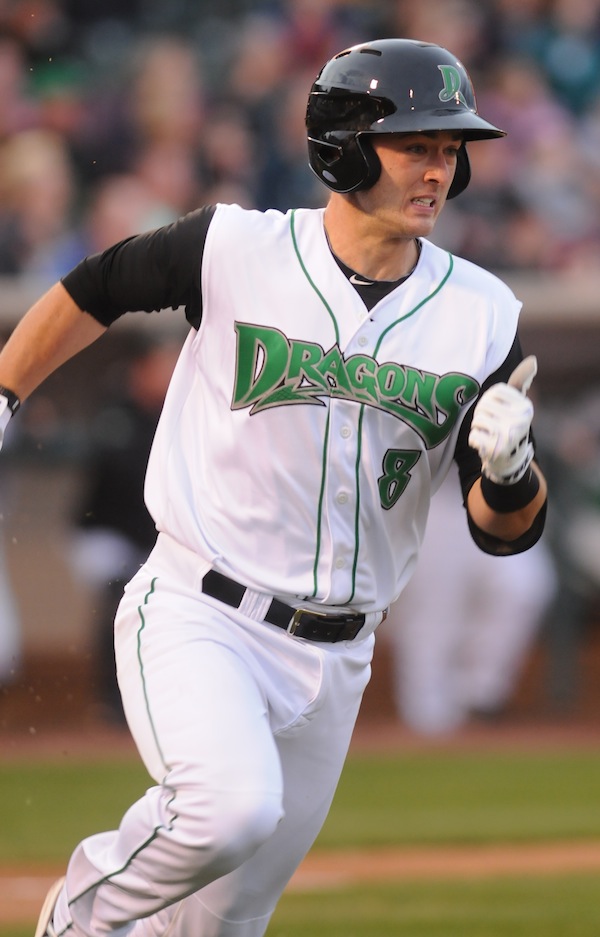 There were several other Dayton players in 2014 that could also take steps forward in the future. Dragons pitching coach Tony Fossas singled out relief pitcher Evan Mitchell as someone with the ability to enjoy a big jump in performance next season. Third baseman Tanner Rahier had three excellent months with the Dragons before wearing down in July and August and finishing with numbers that did not resemble the player he was for most of the season. Outfielder Jon Matthews hit .314 for the Dragons, and while he did not show a lot of power, he utilized two basic principles to turn in a quality year at the plate: put the ball in play, and use the whole field. Matthews was a productive hitter as a result.

Over the Dragons 15 seasons of operation, 67 players have gone to the Major Leagues. Which members of the 2014 Dragons will join that list?