Johnny Cueto pitched eight innings of one run baseball, and the Reds beat the Brewers 3-1 to begin the final six game homestand of 2014. The loss by the Brewers all but eliminates them from the postseason in 2014 (if the Pirates and Giants win one more game the rest of the season, or the Brewers lose one more game, they are eliminated). Todd Frazier and Devin Mesoraco hit back-to-back home runs in the first inning, and the Reds never looked back.

According to FangraphsÃ‚Â WPA statisticÃ‚Â (winning percentage added), the most important play of the game wasÃ‚Â Johnny Cueto getting Ryan Braun to ground into a double play in the 7th inning.Ã‚Â There were runners on 1st and 2nd at the time with 0 outs, and the Reds leading 2-1.Ã‚Â That play increased the Reds chances of winning by 21.0% (from 53.1% to 74.1%).

CuetoÃ‚Â won his 19th game of the season tonightÃ‚Â (full disclaimer before I continue: I do not condone using wins and losses as a way of evaluating a pitcher. It is a 100% flawed system and a poor way to evaluating pitchers).Ã‚Â Cueto’s 19 wins ties his own mark of 19 wins back in 2012 as the most by a Reds pitcher since Danny Jackson in 1988. Now for the more important numbers: Cueto’s 2.29 ERA is the best by a Reds pitcher that qualified for the ERA title since Gary Nolan (1.99 ERA) in 1972. Even more impressive, Cueto’s 0.97 WHIP is the second best since 1901 by a Reds pitcher (only Tom Seaver’s 0.96 WHIP in 1977 is better).

Devin MesoracoÃ‚Â hit his 25th home run of the season in the first inning. Mesoraco continues to climb the list of the most HR in a single-season by a Reds catcher (minimum 50% of games played at catcher). 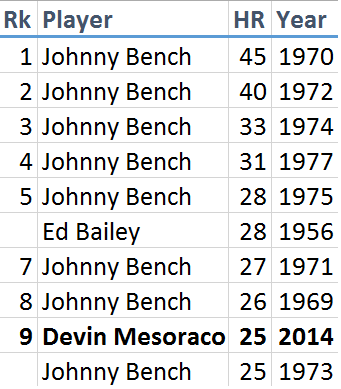 Billy HamiltonÃ‚Â andÃ‚Â Devin MesoracoÃ‚Â made a fine play in the first inning to take away a run from the Brewers.

Aroldis ChapmanÃ‚Â was a little shaky in the 9th inning, but I guess that sort of thing happens when you pitch once every two weeks.

The Reds assured themselves of a non-90 loss season. Whew, it was looking hairy for a little bit.