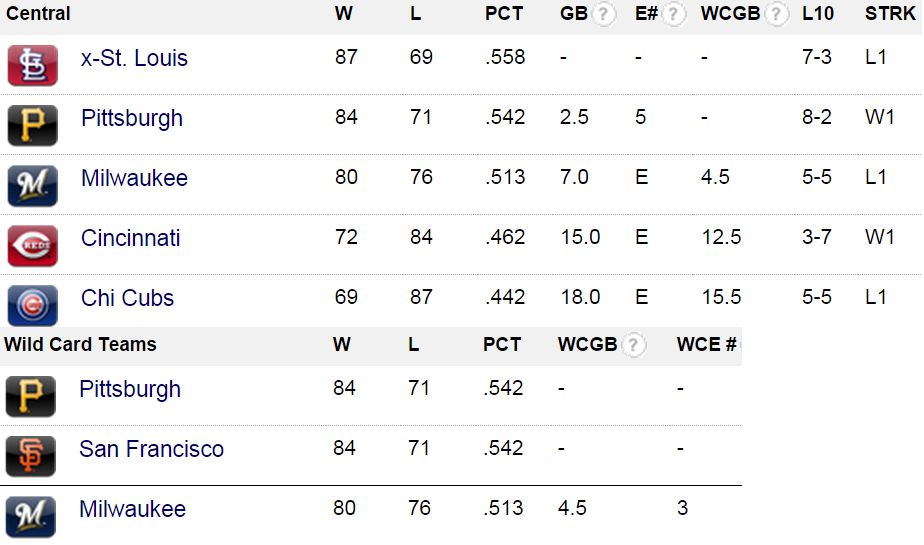 The Cardinals will enter the final week of 2014 with a 2.5 game lead in the NL Central. The Cardinals have already clinched at least a spot in the wild-card game, but they certainly want to avoid playing in that.

The Cardinals schedule over the final week is certainly favorable (Cubs, Diamondbacks), but they will be on the road. If the Cardinals can go 4-2, they would have to like their chances. The Pirates would have to go 6-1 just to force a 1-game playoff for the NL Central (loser would then play in the wild-card game).

The Pirates still have a shot at the NL Central title, and avoiding playing in the wild card game. The Pirates would realistically have to go 5-2 this week to have a shot.

Since then, the Brewers are 29-43, and have been eliminated in the NL Central.

After losing two of three over the weekend in Pittsburgh, it looks like the Brewers season is over. The Brewers are 4.5 games back of the second wild card spot with just six games left. The Brewers would probably have to win every single game the rest of the way, and have either the Pirates or Giants absolutely collapse to have a chance.

If you are a regular reader of this site, you know how bad the Reds have been in the second half. I’ll spare you.

The Cubs are still holding out hope to avoid finishing last in the NL Central. After the Reds second half disaster, the Cubs now trail the Reds by just 3.0 games going into the final week of the season.

NL Central Players of the Week