The Reds lost their fifth straight game on Friday night in St. Louis. David Holmberg allowed two home runs in the first inning, and that was all the Cardinals needed for a 2-1 win. The Reds had the tying run on third base in the 9th inning with one out, but couldn’t score. The Reds have now scored just two runs in the last four games. Life of a Reds fan these days is pretty tough. 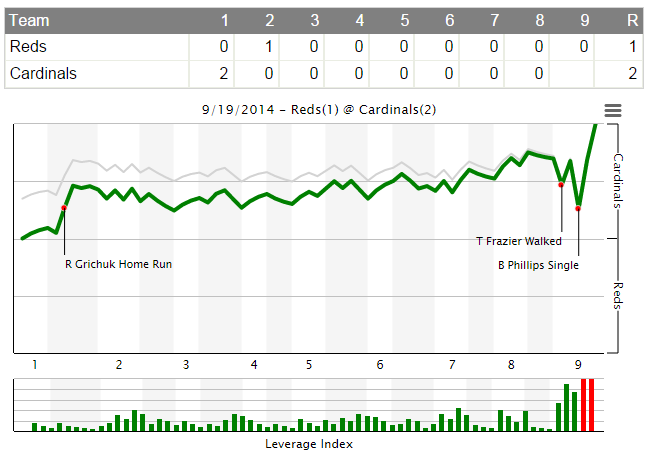 According to FangraphsÃ‚Â WPA statisticÃ‚Â (winning percentage added), the most important play of the game wasÃ‚Â Jay Bruce striking out in the 9th inning by Randy Choate for the 2nd out of the inning. The Reds had runners on 1st and 3rd base.Ã‚Â That playÃ‚Â decreased the Reds chances of winning by 21.3% (from 36.9% to 15.7%).

David Holmberg got off to a brutal start, giving up back to back homers to Randal Grichuk and Matt Holliday in the first inning. Holmberg settled down and didn’t allow another run over six innings. Holmberg is starting to show some signs of why he is the Reds #10 rated prospect. His line on the night: 6.0 IP, 5 H, 2 ER, 3 BB, 3 K.

Devin MesoracoÃ‚Â might truly be the only reason worth watching the Reds for the remainder of the season. I think many of us expected Mesoraco to decline a bit in the second half, but he just hasn’t. I really appreciate the way Mesoraco has carried himself too. Every single night he seemingly gives everything he has, and it has been a true delight to watch him become a very good major league hitter. Even the Cardinals broadcasters were praising Mesoraco tonight! Mesoraco is hitting .278/.365/.534 with a 148 wRC+ this season.

MLB ReplayÃ‚Â continues to have issues. Cozart was called out trying to extend a single into a double. Bryan Price challenged the call, but the umpires in New York missed the call just like the umpires in St. Louis. I honestly don’t even know how you could possibly call Cozart out. The result was the inning ending, instead of the Reds have runners on 2nd and 3rd down 2-1. 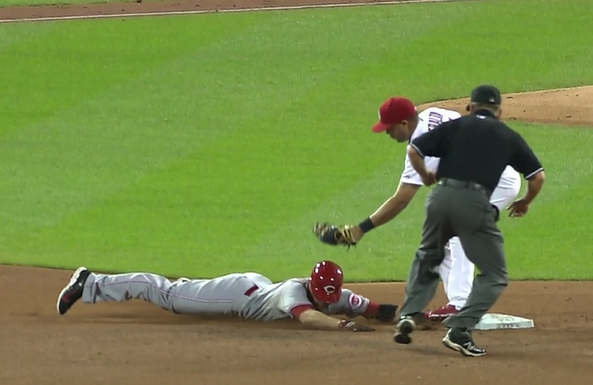 The Reds offense is just bad. Painfully bad.Ã‚Â Our good friend AaronÃ‚Â pointed on twitter tonight that Joey VottoÃ‚Â entered tonight with the team lead in walks (47). Votto has played in 62 games this season. That isn’t good.

You gotta respect the move of Cardinals manager Mike Matheny in the 9th inning. Matheny pulled his closer with 44 saves on the season, Trevor Rosenthal. Matheny put in left-handed specialist Randy Choate to face Jay Bruce with runners on 1st and 3rd, with 1 out in the 9th inning. Bruce had a .582 OPS vs LH pitchers entering tonight. Choate struck out Bruce.

It will be a lot easier for me to watch and enjoy the MLB playoffs this season than the last two. Anyone who knows me, knows that I am a huge baseball fan even outside of the Reds. October is truly my favorite or second favorite month of the year (March Madness is right there). The playoffs the last two seasons were tough to watch after the Reds were heartbreakingly eliminated early in the postseason both years. Each of the last two years, my post-Reds season mourning had not concluded by the time the playoffs ended. This year, I am already over the Reds and looking forward to the postseason once again. This year could be a really fun MLB postseason.

Our old friend Jonathan BroxtonÃ‚Â has had a rough couple nights for the Brewers. Last night, Broxton walked in the tying run in the 8th inning against the Cardinals. Tonight, he gave up a 3-run homer to Russell Martin, blowing a 2-0 lead. It looks like the Brewers season is officially over, as they are now 4.5 games back from the second wild card spot. What a collapse.