[We’re really pleased that Tom Nichols, the Director of Media Relations and Broadcasting for the Dayton Dragons, has agreed to write a three-part series reviewing the Dragons’ 2014 season. — Thanks, Tom! — spm]

The Dayton Dragons finished the 2014 season with an overall record of 68-70, falling one win short of qualifying for the Midwest League playoffs. This is part one of a three-part series looking at some of the prospects on this yearÃ¢â‚¬â„¢s Dragons team.

The Dragons starting rotation was one of the best in franchise history. The quality depth of the rotation resembled the 2006 Dragons that featured Johnny Cueto, Travis Wood, Carlos Fisher, Zach Ward, and Jeff Stevens. It is possible that one or more of the top four starters (Nick Travieso, Sal Romano, Amir Garrett, Nick Howard) could jump a level and open the 2015 season at Double-A Pensacola.

Rising on the Prospect Charts

Travieso, Romano, and Garrett all opened the season as solid prospects in the Reds organization, and all three made significant improvements over the course of the 140 game season. When asked to select the three Dragons pitchers who improved the most from opening day until the season finale, Dragons pitching coach Tony Fossas named Travieso, Garrett, and Romano.

Travieso, selected out of Archbishop McCarthy High School in the Ft. Lauderdale area in the first round in 2012, spent the final three months of the 2013 season with the Dragons as a 19-year-old and enjoyed mixed success, going 7-4 with a 4.63 earned run average in 17 starts. He returned in 2014 and emerged as one of the Midwest LeagueÃ¢â‚¬â„¢s top starting pitchers. Travieso led the league in wins, was seventh in ERA, and second in innings pitched, going 14-5 with a 3.03 ERA in 26 starts.

Travieso had an excellent start to the season, endured a rough eight-start stretch in the middle, and then completely dominated over the final six weeks. He went 5-1 with a 1.60 ERA in his first nine starts and was selected to pitch in the Midwest League All-Star Game. He went just 2-4, 7.82 from May 26-July 13, and then recovered over his final nine starts, going 7-0 with 1.22 ERA as he allowed two runs or less in eight of the nine outings.

TraviesoÃ¢â‚¬â„¢s velocity picked up significantly as the season moved along. He averaged 91-92 on his fastball over the first half of the season but was throwing much harder over the final six weeks.Ã‚Â  In his final start on August 30, the opponent that night, Lake County, recorded TraviesoÃ¢â‚¬â„¢s fastball at 98 mph. The Dragons radar gun clocked him at 96 in the same game, still a marked improvement.

Fossas singled out Travieso prior to the teamÃ¢â‚¬â„¢s final game of the season for his improvement during the year.

Ã¢â‚¬Å“He has had a phenomenal year,Ã¢â‚¬Â said Fossas.Ã‚Â  Ã¢â‚¬Å“HeÃ¢â‚¬â„¢s a workaholic, great intangibles, has a goal and a plan, very focused on baseball and preparing for each start.Ã‚Â  He was pitching at 94-95 consistently at the end of the season, topping out even higher.Ã‚Â  His slider is going to be a plus pitch and his change-up is coming around.Ã‚Â  I would say there is no reason he canÃ¢â‚¬â„¢t compete in Double-A next season.” 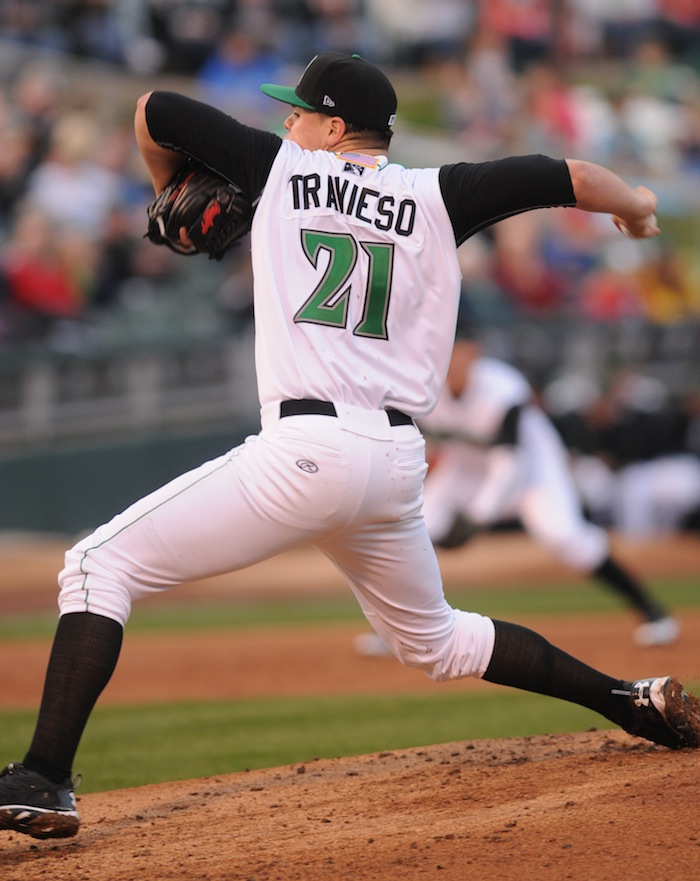 The former college basketball player had a breakthrough season in 2014 and made an announcement during the year that he would commit to baseball fulltime in the future. After 10 starts through May 24, Garrett was 0-4 with a 5.74 ERA. Suddenly, the light came on. He began throwing his breaking ball for strikes, keeping hitters off his 92-94 mph fastball. The results were immediate.Ã‚Â  Starting May 30 and continuing through the rest of the season, Garrett was 7-4 with a 2.67 ERA.Ã‚Â  Most impressively, he limited opposing batters to just 60 hits in 91 innings during that stretch (.188 average), walking 30 and striking out 95.

When he was at his best, he was virtually unhittable. He fired two three-hit shutouts in doubleheader games (seven-inning games). His finest performance came on August 13 against eventual league runner-up Lake County, when he struck out 12 batters over seven scoreless innings, walking only one and allowing just three hits in a complete game win.Ã‚Â  He enjoyed a stretch in the second half when he allowed two runs or less in 11 of 12 starts.Ã‚Â  His final record was 7-8 with a 3.65 ERA.Ã‚Â  He may have tired a little over his final four starts when his ERA rose from 3.22.

Fossas, like everyone else, was amazed at times by the improvement.

Ã¢â‚¬Å“He had a great second half,Ã¢â‚¬Â said Fossas.Ã‚Â  Ã¢â‚¬Å“HeÃ¢â‚¬â„¢s a great competitor.Ã‚Â  HeÃ¢â‚¬â„¢s a tremendous athlete on the mound and he has shown more improvement than I really thought he could make this year for being in his first full year in game competition.Ã¢â‚¬Â

Since he signed as a 17-year-old from Southington, Connecticut in 2011, Romano has added more velocity than arguably any pitcher in the Reds organization.Ã‚Â  His fastball was topping out at 91 mph when he signed, but he had many games this season when he could consistently fire fastballs at 96 and top out a bit higher.Ã‚Â  At 6Ã¢â‚¬â„¢5Ã¢â‚¬Â, 260 lbs., Romano feels he will throw even harder next season and some scouts foresee Romano eventually flirting with triple-digits.Ã‚Â  Romano broke the Dragons club record for most starts in a season and led the Midwest League in innings pitched.Ã‚Â  Fossas was pleased.

RomanoÃ¢â‚¬â„¢s final numbers included a record of 8-11 with a 4.12 ERA.Ã‚Â  As a sinkerballer who gets a lot of ground balls, he will improve as he moves up the chain with an improved defensive infield behind him.Ã‚Â  Romano tied for the league lead in inducing double plays with 19 but also suffered when several plays behind him that were not made. 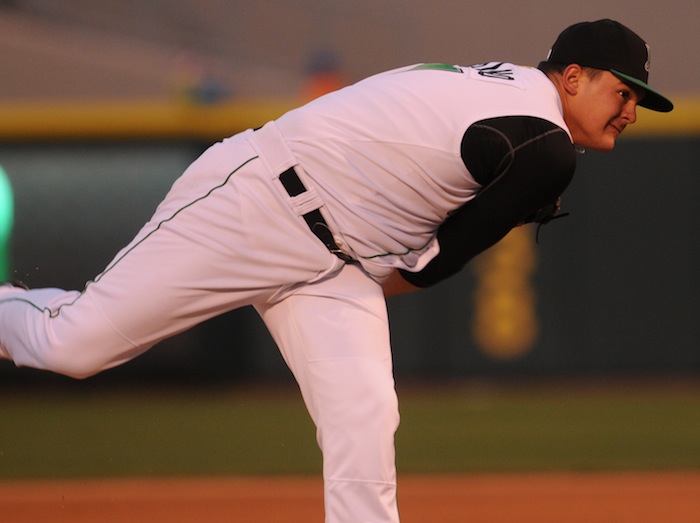