A double by Brandon Phillips broke up a no-hitter by Cubs starting pitcher Jake Arrieta with 1 out in the 8th inning. The Reds may have avoided being no-hit for the first time in the regular season since 1971, but they couldn’t avoid their 81st loss of 2014. The Reds 81st loss ensures the Reds will not have a winning 2014 season. The Reds would have to finish the season 10-0 to finish the year .500. 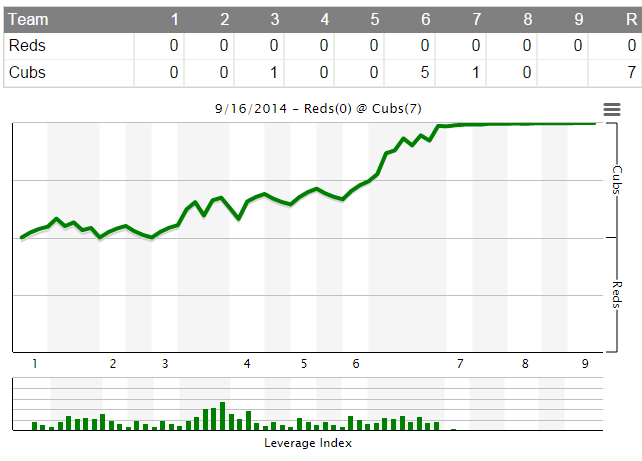 According to FangraphsÃ‚Â WPA statisticÃ‚Â (winning percentage added), the most important play of the game wasÃ‚Â Jorge Soler’s double off Johnny Cueto in the 6th inning. Cubs had runners on 2nd and 3rd with 0 outs.Ã‚Â That play increased the Cubs chances of winning by 9.1% (from to)

The Reds weren’t no-hit by the Cubs. Congrats, guys.

The Reds offenseÃ‚Â was nearly no-hit……again. According to the Reds broadcast, it was the first time the Reds have been shutout in back to back games since 1946. Good times.

Thom BrennamanÃ‚Â andÃ‚Â Chris WelshÃ‚Â had to make sure they got all of their bunt talk out of their system, as this season is drawing to a close. Tonight, the two went on and on about how Javier Baez (yes, the same Javier Baez who hit 50 HR in 224 games in the minors between 2013-14) needs to learn how to play team baseball, and learn how to lay down a bunt. These two are tough enough to listen to on most nights, but tonight the combo was absolutely unbearable. Our own Steve Mancuso said it best on Twitter tonight “Reds TV broadcast says a lot of stuff that makes their viewers have a worse understanding of baseball. Evaluate pitchers on W-L,Ã‚Â evaluate hitters on AVG, RBI and RISP, evaluate defense on errors and fielding percentage. Sigh. They promulgate ignorance.”

Joey VottoÃ‚Â was taking batting practice before tonight’s game. It is still unclear if Votto will play one of the Reds final 10 games of 2014.