The Reds outfielders have a combined 79 wRC+ in 2014. That is dead last in all of baseball this season.

And it gets even worse. The 2014 Cincinnati Reds outfield has the worst OPS in team history since 1914, and it’s not even close. 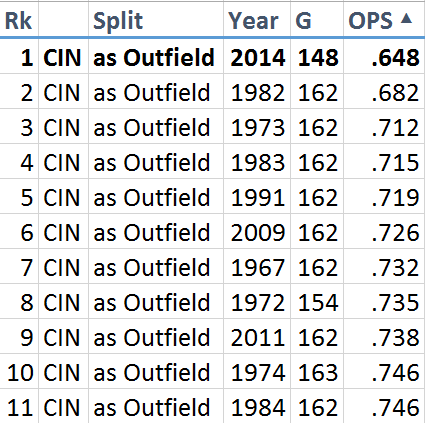 Billy Hamilton has had a pretty good season by most measures. Hamilton has posted a 3.3 WAR, mostly due to his exceptional defense in CF. Hamilton’s bat however has been below average. Hamilton is hitting .259/.296/.366 with an 83 wRC+. This is not to say Hamilton’s 2014 season has been a failure, because he has actually been the Reds third most valuable position player using WAR. The overall offensive production just isn’t there yet, especially out of a leadoff hitter.

Left-field has once against been an absolute disaster for the Reds. The Reds LF spot has a combined 78 wRC+, which is dead last in the MLB. The most surprising thing about that number is the guy who has played the most in LF for the Reds, Ryan Ludwick, actually hasn’t been all that bad. Ludwick has posted a just below average 94 wRC+. Ludwick has made 84 starts in LF this season (Heisey has 30, Schumaker has 26).

Then there is the bench. Chris Heisey hasn’t been too terrible offensively, posting an 84 wRC+ (better than Bruce and Hamilton). Heisey’s 9 Defensive Runs Saved have helped him post a respectable 1.4 WAR. What has really sunk the Reds outfield offensive numbers has been Skip Schumaker. Skip has made 46 starts in the outfield (also 15 more at 2B), and has been very bad. Schumaker has a 66 wRC+, and has hit .235/.287/.308. Schumaker’s 66 wRC+ is the sixth worst of any OF in the MLB with 250+ PA.

Overall, it has been a pretty painful year for the Reds. The lack of offensive production from the Reds outfield is certainly a good place to start looking for reasons why.

All stats courtesy of Baseball-Reference’s Play Index and Fangraphs (include games played through 9/12/14). For more information on the wRC+ statistic, visit Fangraphs website.