[This Special Edition series preview was co-authored by Nick Kirby and Steve Mancuso.]

The 2014 Milwaukee Brewers season has been one of epic rise and tragic fall – equal parts stunning. They grabbed first place by the throat on April 5 and before the calendar had turned to May, the Brewers had jumped to a 6.5 game lead in the NL Central.

They held on to that advantage until two weeks before the All-Star Game when they slumped. The Brewers’ lead shriveled to a single game over the Cardinals and 1.5 games over the surging/lucky Reds.

After the break, as the Reds crashed, the Brewers rallied. OnÃ‚Â August 19, Milwaukee was 16 games over .500 (71-55). A week later, the Brewers began a horrifying free fall that they may not have yet fully escaped.Ã‚Â Including their two recent wins against Miami, they have lost 13 of 16.

Reds fans are painfully familiar.Ã‚Â Been there, blown that.

But unlike the Reds, Milwaukee hasn’t been losing a bunch of one-run heartbreakers. They’ve been getting pounded. Just since August 26, they’ve lost more than a half-dozen games by two or three runs. They’ve lost by four and by six. They lost by eight. They lost by an even ten. And they lost by eleven.

Based on run differentials, the Brewers and Reds should have identical 73-74 records, with St. Louis checking in at 74-73.

Milwaukee now wobbles at five games over .500. Even after the Reds’ exciting wins over St. Louis this week, the Brewers trail the Cards by four games. If the season ended today, former MVPs Ryan Braun and Joey Votto would watch Josh HarrisonÃ‚Â play October baseball from the comfort of their La-Z-Boys.

With a collapse this dramatic, you can usually identify multiple causes. And that’s the case with Milwaukee.

Neither Carlos Gomez (wrist) nor Ryan Braun (thumb) has been fully healthy. Braun (.171/.227/.244) and Gomez (.214/.303/.286) have slumped, and the Brewers’ center fielder hasn’t homered since August 20. In fact, in the last two weeks, Gomez, Jonathan Lucroy, Jean Segura, Aramis Ramirez and Mark Reynolds have hit nary a ball over the fence.

But Milwaukee’s Worst hasnÃ¢â‚¬â„¢t been limited to the batterÃ¢â‚¬â„¢s box. Run prevention has failed them as well. Their pitchers have allowed 5.6 runs/game since August 26, compared with a season number of 4.2 R/g.

Before last night, the Brewers’ starting pitchers were 1-11 with a 6.95 ERA in the last 13 games. Take away Mike Fiers and itÃ¢â‚¬â„¢s an incomprehensible 0-10, 7.91. Over a 14-game stretch the Brewers trailed by at least three runs in the first four innings ten times.

The three pitchers the Reds are scheduled to face this series have struggled to say the least. In his last four starts, Yovanni Gallardo has pitched five or fewer innings three times and given up five earned runs in each of his last two starts. Kyle Lohse has pitched only 18.2 innings in his last four starts and given up 17 runs. Matt Garza spent a month on the DL with a strained left oblique and in his two starts since returning hasnÃ¢â‚¬â„¢t made it past four innings. And let’s not leave out Wily Peralta just because the Reds don’t see him this series. He gave up 13 runs in his last two starts in August.

The Brewers closer, Francisco Rodriguez, who is having an excellent season overall, has made only five appearances in the last seventeen games. In one of those he blew a save and in a second he gave up three runs in a tie game.

None of this, of course, is to say the Reds will have an easy time of it at Miller Park this weekend. The Brewers have won their last two games. But Bryan Price’s boys and Reds fans should keep in mind that Milwaukee shouldn’t be at full swagger. A figurative punch in the mouth might be all it takes to floor the Brew Crew for good in 2014.

And let their fans get back to booing. 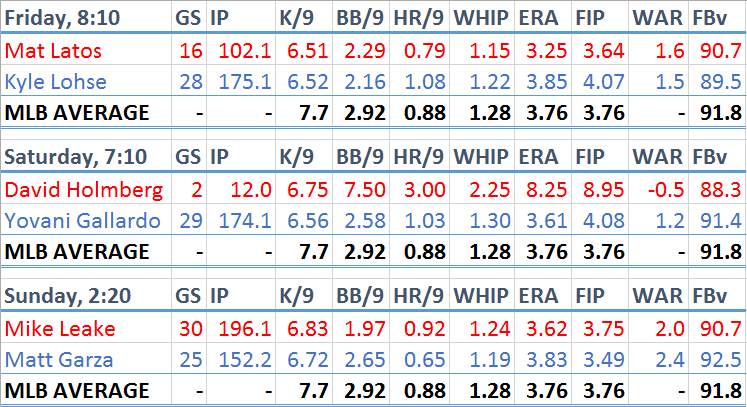 Friday’s matchup of Mat Latos and Kyle Lohse is certainly an interesting one. Both pitchers have pretty similar numbers, with the big exception being Lohse gives up a lot more homers. Our own Michael Maffie wrote a great piece about Latos last week.

David Holmberg will get another chance at starting on Saturday. He was awful in his only two starts with the Reds, but pitched very well on Monday night in relief. Holmberg had to pitch in an emergency role after Dylan Axelrod was hurt after facing just one batter. Holmberg pitched 5.2 scoreless innings, allowing 4 hits, 2 walks, and striking out 5. For the Brewers, Yovani Gallardo is just having an average year, but has struggled lately (as mentioned above).

Like Friday, Sunday should also be a good matchup. Leake is coming off a solid start on Tuesday, while Garza is making just his third start since returning from the DL.

The Brewers lineup 1-6 looks really good. Everyone has a wRC+ of 113 or higher, and Gomez and Lucroy have both been worth over five wins this season. They have collectively struggled of late though.

First base has been troublesome for their platoon of Mark Reynolds (87 wRC+) and Lyle Overbay (90 wRC+). Recent call-up Matthew Clark has made the last two starts at 1B, and hit 2 HR in just 13 PA. Look for him to get the nod against the Reds.

Last night in Milwaukee, the Brewers starting pitcher Michael Fiers hit Giancarlo Stanton in the left eye with a pitch.

Stanton had facial lacerations requiring stitches, multiple facial fractures, and dental damage. Here is the rest of the storyÃ‚Â (ESPN):

The umpires ruled that Stanton swung at the pitch, setting up an 0-2 count.Ã‚Â Reed JohnsonÃ‚Â pinch hit for Stanton and was hit in the hand by Fiers’ next pitch. Casey McGehee was in the on-deck circle and starting yelling at Fiers, and both benches and bullpens emptied.Ã‚Â There was some pushing and shoving, but it did not appear any punches were thrown. When order was restored, the umpires ejected McGehee and Redmond.Ã‚Â Fiers appeared to be shaken as he watched Stanton being attended to, and he was still shaken after the game.

“It’s very tough,” Fiers told reporters. “I’ve never in my life experienced anything like that. It was very hard for me to take in everything at the moment and come back and throw another pitch.

“I just want to send my thoughts and prayers to Giancarlo Stanton. I would never think of throwing at somebody like that. Never in my life has something like that happened. I’m very sad that it hit them. I’m very sorry to their teammates, their fans, his family. It’s just tough.”

Fiers also tweeted an apology to Stanton after the game. “I am deeply sorry about what happened tonight. I can’t imagine what you and your family are going through.Ã‚Â my thoughts and prayers are with you at this time. I feel horrible and hope for a speedy recovery.

It was obviously a very emotional night last night in Milwaukee, and it will be interesting to see how the Brewers respond to it.