Daniel Corcino filled in brilliantly in his first career MLB start, after RedsÃ‚Â scheduled starter Mat Latos was scratched because of a bone bruise. CorcinoÃ‚Â allowed just two hits in six innings, but it wasn’t enough. The Brewers got a walk-off win off Jumbo Diaz, a big win for a struggling team still fighting for a playoff spot. The Reds three game winning streak came to an end. 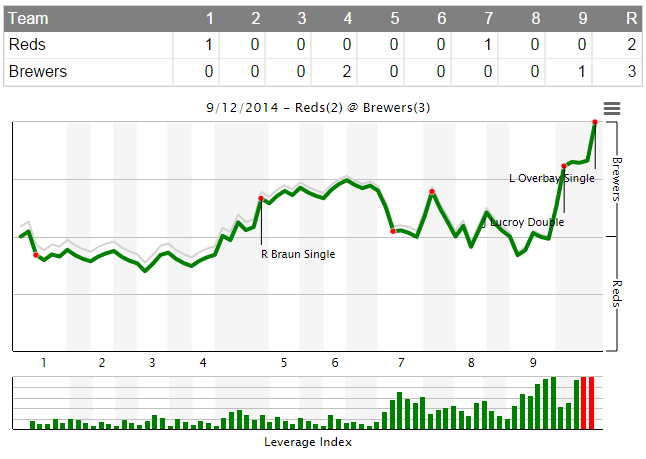 According to FangraphsÃ‚Â WPA statisticÃ‚Â (winning percentage added), the most important play of the game wasÃ‚Â Jonathan Lucroy’s leadoff double in the 9th inning off Jumbo Diaz. That play increased the Brewers chances of winning by 17.4% (from 63.3% to 80.7%)

Kris NegronÃ‚Â hit a solo homer in the first inning to give the Reds a 1-0 lead. It was Negron’s 5th HR of the season. He also legged out a “hustle double” in the 8th inning. Negron has looked really good since being called up in July. I think he has done more than enough to show that he should be on the 2015 opening day roster. Negron is a terrific defender, who can play every position except catcher (including SS). There is no way players like Skip Schumaker, Ramon Santiago, or Jack Hannahan should be on the roster over Negron.

Logan Ondrusek gave up a leadoff double to Ryan Braun in the 7th inning, but then proceeded to strike out the side.

Brandon PhillipsÃ‚Â walked twice tonight. It was the first time Phillips had walked twice in a game since opening day.

Jumbo DiazÃ‚Â really struggled tonight. Diaz allowed a leadoff double in the 9th, and then had to intentionally load the bases to try to get out of it. He couldn’t, and the Reds lost. Diaz has been shaky of late. In his last six appearances, he has allowed 4 ER, 9 H, 5 BB, and just 3 K’s in 5.0 IP.

Bryan PriceÃ‚Â continues to be obsessed with the bunt. He called for Heisey to bunt twice tonight with runners on second base. After Heisey failed to put down a successful bunt on the first two pitches in the 7th inning, Heisey just missed a three run homer. That is why you shouldn’t bunt the runner over. 3 runs > 1 run.

Mat Latos was scratched from his scheduled start tonight because of bone bruise on his right elbow. Our own Steve MancusoÃ‚Â wrote a bit about Latos injury earlier today on RN.

Jack Hannahan was none too pleased about being called out on strikes, in the 9th inning, on a 3-2 count, with runners on 2nd and 3rd. Jack had a point too, it should have been ball four. 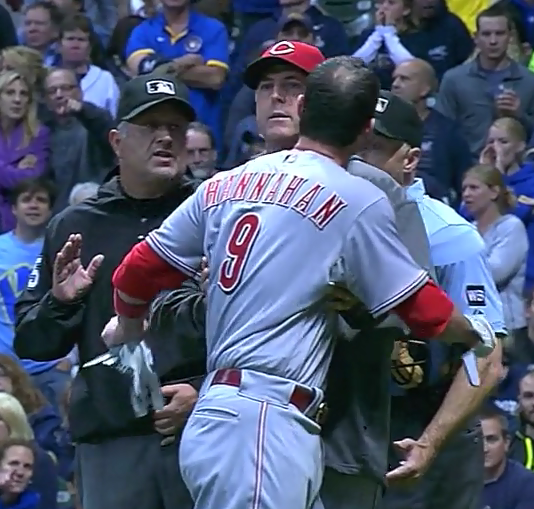 Ya, that wasn't a strike. pic.twitter.com/f1E1PAXLj4