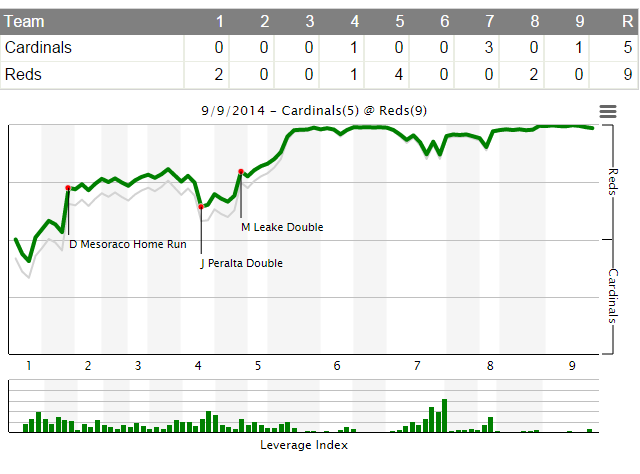 According to FangraphsÃ‚Â WPA statisticÃ‚Â (winning percentage added), the most important play of the game wasÃ‚Â Devin Mesoraco’s 2-run HR in the first inning off Michael Wacha.Ã‚Â The HR increased the Reds chances of winning by 19.4% (from 56.6% to 72.6%).

Mesoraco hit his 23rd HR of the season in the first inning. That homer moved Mesoraco even further up the list of most HR’s in a single-season by a Reds catcher (min 50% of games played as a catcher). I honestly thought Mesoraco would slow down a little bit in the second half, but he really hasn’t. Mesoraco is now hitting .287/.370/.557 with 23 HR, 73 RBI, and 156 wRC+. As a side note: can you believe Dusty Baker continuously refused to play Mesoraco? 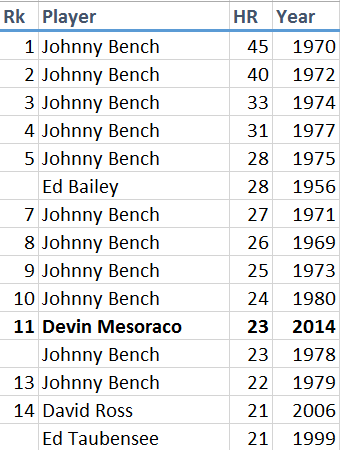 Mike LeakeÃ‚Â pitched a strong game tonight, allowing 3 runs in 6.0 innings (two of them crossed the plate after he left the game). Leake also added an RBI double in the 4th inning. It was nice to see Leake bounce back from a tough outing in Baltimore, where he allowed 7 ER. Leake’s final line on the evening: 6.0 IP, 8 H, 3 ER, 0 BB, 6 K, 1.62 FIP. The number that sticks out is the “0 BB.” Leake does a great job not hurting himself.

Zack CozartÃ‚Â had two hits tonight, including a triple. He also made his usual great defensive play tonight too.

Brandon PhillipsÃ‚Â hit a 2-run double in the 5th inning to give the Reds a 6-1 lead. It was just Phillips 5th & 6th RBI since returning from the DL, and just his 4th extra-base hit.

Brayan PenaÃ‚Â walked three times tonight. It was the first time in his career that he has ever done that. Pena entered tonight’s game with just 16 BB in 337 PA. Pena also made a brilliant catch on a rocket hit by A.J. Pierzynski to end the 7th inning. The Cardinals had the bases loaded at the time, and the score was 7-4.

Jumbo DiazÃ‚Â struggled to say the least in relief tonight. Diaz allowed 3 hits and walk in an inning.

J.J. HooverÃ‚Â couldn’t even get out of the 9th inning, when he entered with a 9-4 lead.

Jayson StarkÃ‚Â of ESPN wrote a terrific piece calledÃ‚Â The mind-blowing stats of AroldisÃ‚Â ChapmanÃ‚Â today. What is truly mind-blowing is that Aroldis Chapman has now only pitched 46.0 innings this season. The Reds and Bryan Price have wasted a lot of bullets from Chapman this season, by saving him nearly exclusively for save situations.