The Reds were just swept in Baltimore, and are 6-16 in their last 22 games. The Mets are coming off back-to-back wins against the Marlins, and are 20-24 in the second half.

Friday’s matchup of Simon vs Colon is a good old ERA vs FIP debate. Traditional measures say that Simon (3.28 ERA) has been much better than Colon (4.01 ERA). But, if you are a regular reader of this site you know by now that FIP is a much better way of measuring what a pitcher can actually control (K, BB, HR). That means Colon (3.39 FIP) has actually been much better, and much less lucky than Simon (4.41 FIP).

Saturday’s matchup of Cueto vs Gee gives the Reds a significant advantage. I think the numbers below speak for themselves, no matter what you value in a pitcher.

Sunday’s matchup should be a fun one, as Latos and Wheeler have nearly identical numbers (with Latos a much better BB rate, and Wheeler a much better K rate). Zack Wheeler was the sixth overall pick back in 2009 for the Giants, and was traded for Carlos Beltran in 2011. Wheeler’s fastball averages an impressive 95 MPH. 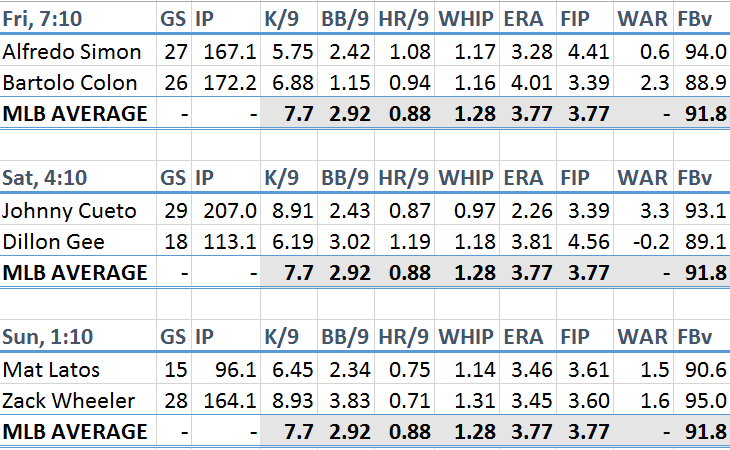