Alfredo Simon gave up six earned runs, and lasted just four innings. The Reds bullpen allowed eight runs of their own, and the Reds had one of their most embarrassing losses in recent memory, 14-5 to the Mets. Tonight tied a season high in runs allowed (Reds lost 14-9 to Toronto on June 20th), and was a new season high in hits allowed (18). The Reds are now a season high nine games below .500 (their most since 2009).

According to FangraphsÃ‚Â WPA statisticÃ‚Â (winning percentage added), the most important play of the game wasÃ‚Â Travis d’Arnaud’s 3-run HR in the 4th inning, giving the Mets a 6-2 lead.Ã‚Â That HR increased the Mets chances of winning by 25.2% (from 36.5% to 11.3%).

Devin Mesoraco hit his 22nd HR of the year tonight in the first inning. Mesoraco became just the third different Reds catcher ever to hit 22+ HR in a season (min of 50% of games played at catcher). That Bench guy was pretty good. 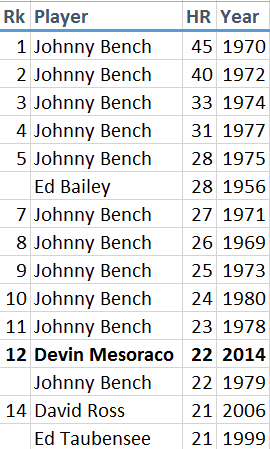 Todd FrazierÃ‚Â hit his 24th HR of the season tonight too.

Did we mention it's Irish Heritage Night? The #Reds will be dressed in green jersey this evening. pic.twitter.com/Z41zcBNkis

Alfredo SimonÃ‚Â was terrible tonight. Simon allowed 8 hits, 6 earned runs, and 3 walks in 4.0 innings tonight.Ã‚Â I’ll just quote myself from my series preview of the Mets from earlier today

“FridayÃ¢â‚¬â„¢s matchup of Simon vs Colon is a good old ERA vs FIP debate. Traditional measures say that Simon (3.28 ERA) has been much better than Colon (4.01 ERA). But, if you are a regular reader of this site you know by now that FIP is a much better way of measuring what a pitcher can actually control (K, BB, HR). That means Colon (3.39 FIP) has actually been much better, and much less lucky than Simon (4.41 FIP).”

Tonight's #Reds game is brought to by the letters F, I, and P.

J.J. HooverÃ‚Â gave up another homer.

Ryan DennickÃ‚Â was pretty impressive in his debut on Tuesday, pitching a perfect inning in Baltimore. He was not so much tonight. Dennick allowed a 3-run bomb to Curtis Granderson in the 6th inning.

Daniel CorcinoÃ‚Â who is trying to impress the big league club (as Chris Welsh spoke of), certainly did not do that tonight. Corcino added to the Reds misery tonight by allowing 3 earned runs (including 2 HR) in relief.

Brandon Phillips ended his 0 for 20 streak with a base hit in the 2nd inning. Phillips was moved to the #5 spot in the order tonight. Of course our good friend here at Redleg Nation, Paul Daugherty of the Cincinnati Enquirer let us know about how he and Marty Brennaman agree about how wonderful of a player Phillips is.

So let’s go on and on about how amazing Brandon Phillips is for playing through his injury, because that is such a great help to the team, right? Phillips entered today with a .366 OPS since returning from the DL. If you don’t know just how bad a .366 OPS is, Homer Bailey has a career .367 OPS. It is just amazing how hypocritcial this statement by Marty, and then reiterated by Daugherty is. If Joey Votto had come back and played hurt, and posted anywhere near a .366 OPS, those guys would have absolutely lit Joey Votto on fire for it.

I’m not here saying that Phillips playing through an injury is no big deal either. It is certainly admirable to play hurt, and I am not trying to take anything away from that. It is just that this praise of Phillips by Daughtery and Marty seems a lot more like a cheap shot at Votto for not playing hurt. That is what bugs me about it.